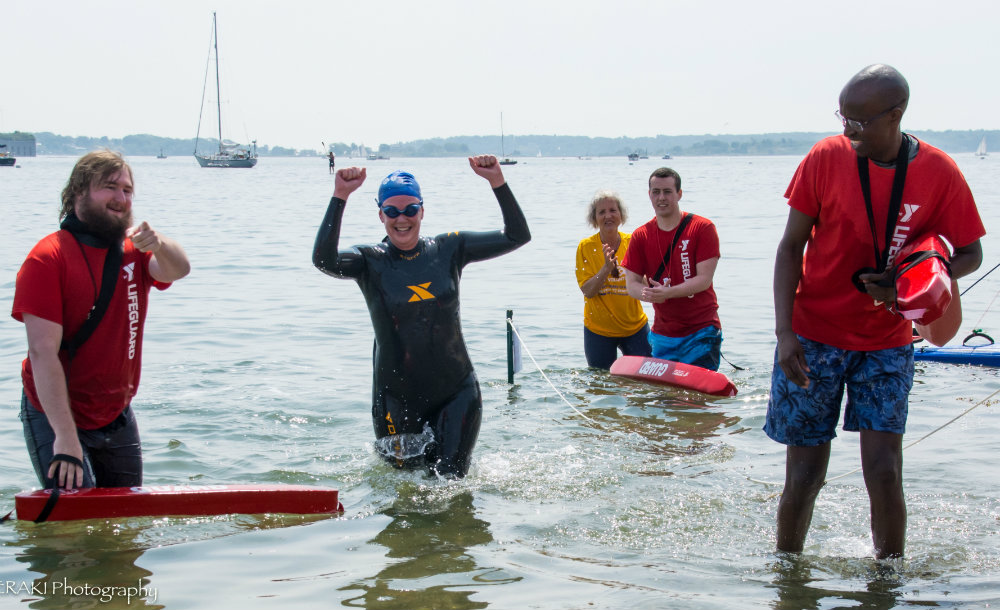 A distance of 2.4 miles. Open water. No water wings.

The annual Peaks to Portland Swim to Benefit Kids is an event most locals know about, but not all have had the pleasure of experiencing. It certainly sounds like an impressive and even daunting feat, swimming those 2.4 miles between Peaks Island and Portland’s East End Beach. The water is cold. You can’t see the bottom. And 2.4 miles ain’t nothing.

But here’s a secret: Swimming the Peaks to Portland is so so doable. Even if you don’t at all consider yourself a highly experienced, super buoyant elite swimmer. You don’t need to be.

Back in the day, the P2P consisted of a couple of dozen bold souls who took to the cold waters of Casco Bay – without wetsuits, no less. But these days, the P2P welcomes upwards of 600 swimmers each year, ranging from elite to recreational, first-timers and many-timers, 20-somethings and 60-somethings. The YMCA of Southern Maine does an amazing job organizing each detail, and there are volunteers galore the whole way to make sure everybody is safe.

Also, it’s a swim, not race. (Okay, it is timed, and those swimmers in the first heat will be hauling with remarkable speed. But for many, it’s simply about reaching the finish line.) If you can swim a mile in 40 minutes, you can do this.

Registration for the Peaks to Portland Swim to Benefit Kids, which takes place on July 20, 2019, is open now. If you’re on the fence about signing up, allow me to help.

5 reasons to sign up for the Peaks to Portland:

Swimming the Peaks to Portland Swim to Benefit Kids is an awesome affair – one that you’ll remember forever, whether you swim it once or, like many participants, return year after year. The energy on the beach before the swim is electric, with kayaks primed for launch at the water’s edge and swimmers pulling on their wetsuits and swim caps with equal amounts of excitement and nervous anticipation. There’s color everywhere – from the bright reds and blues and yellows of the boats (many of which are decked with colorful balloons and flags) to the hot pink and neon green duct tape some swimmers use on their feet, wrists and swim caps (the better to be seen and recognized by their kayaker, since swimmers in wetsuits tend to all look the same). And when it’s time for the waves of swimmers to take to the water, the goggles go on, the crowd cheers, and the count down begins. The first few minutes of swimming are a flurry of kicking legs, but eventually you find yourself swimming along at your own pace, taking over the shipping lane, and perhaps taking a few seconds to bob in the water, take in the view, and think, “holy cow, I’m floating in a place most people don’t float.” And soon you’re nearing the beach, your eyes spotting the big inflatable FINISH sign and all the people waving you in. Then you’re on your feet – maybe a little unsteady at first as you walk out of the water but grinning ear to ear, goggle imprints around your eyes, and the realization that YOU DID THIS swelling up in your chest. And it feels incredible.

2. The chance to see Casco Bay, Fort Gorges, and Portland from a whole new perspective

Perhaps you’ve ridden the Casco Bay Lines ferry before (maybe hundreds of times) or paddled out to Fort Gorges to explore via kayak. But swimming the Peaks to Portland gives you a whole new perspective on the water and the Portland coastline. The course takes swimmers past Fort Gorges, where you can float for a minute if you’d like, gaze at the fort, and realize how few people really get to swim where you are swimming  now. Or how few people experience the distance between Peaks Island and Portland this way – in a whole-body-sensory way, with saltwater on their lips and the water jostling all around and their feet kicking high above a seafloor they cannot see. You might find yourself becoming single-mindedly focused on the tall apartment building that sticks out on the East End. It’s not much to look at usually, but it’s an easy marker for spotting while you’re swimming. And as you near East End Beach, you’ll swim amongst moored sailboats with your eyes on the finish-line prize, approaching the beach like some shipwrecked hero who swam away from a deserted island and has found home again.

3. The overwhelming sense of accomplishment (and yes, bragging rights)

There’s a feeling you get when you accomplish something challenging. You’ve likely felt it before. The Peaks to Portland to Benefit Kids offers that in spades. When you try something that’s new to you (and a little bit scary) and end up doing it and realizing it’s one of the neatest things you’ve ever done, you’re rewarded with a sense of accomplishment that lasts a very long time. Finishing this swim isn’t a breeze – it can be a challenge – but that’s what makes it such an accomplishment. And while you’ll be sharing the water with hundreds of other swimmers, participating in this swim is still a fairly rare feat, which means you’ll have an added sense of pride for doing something not everyone does.

And let’s face it, it will feel super swell to point to the water as you’re hanging on East End Beach or riding the Casco Bay Lines ferry months or years after the P2P, turn to your friends and say, “I swam that.”

The Peaks to Portland Swim to Benefit Kids supports the YMCA of Southern Maine’s youth development programs. Many people don’t realize that. This means that the money you raise will allow more kids to participate in YMCA summer camps, swim lessons, and an array of classes like tumbling, dance, karate, forest exploration, art, and more. We’re talking about kids like 9-year-old Dizier, who lived in the family shelter in Portland with her mom and little brother. Thanks to the YMCA, Dizier was able to escape the stress of the shelter for a summer by attending the Otter Pond Outdoor Adventure Camp for free. At camp, she got to be a carefree kid. She made friends, sang camp songs, and was exposed to new experiences like archery and fishing. Dizier’s mother Carmen is thankful for that summer, and says Dizier’s been much more confident and happy since attending. Best of all, with Dizier in camp, Carmen was able to get back on her feet and the family is now in their own home and doing well.

Last year, the YMCA of Southern Maine served nearly 10,000 children and provided more than $1.2 million in financial assistance and program support, ensuring children and teens in our community had the opportunity to learn, grow, and thrive. The money raised during the Peaks to Portland is a big part of that.

A 2.4-mile open water swim can sound daunting to a first-timer. (It’s so far! You can’t see the bottom! There are fish and other sea animals in there!) But this swim is also so so achievable, even if you’re not the fastest, most-accomplished swimmer in the state. Swimmers of all levels complete this event – from competitive swimmers with years of experience to swimmers who only learned to swim last summer (I can speak with experience here. I swam the Peaks to Portland the year after I learned to swim. I enjoyed it so much, I swam it again. And again).  The saltwater and your wetsuit ensure that you’ll be supremely bouyant (so no, you won’t sink to the bottom) and this race is extremely well organized, with loads of support on the water to make sure you’re safe (so no, you won’t get swept out to sea). If you need a breather, you can hang on to your kayaker’s boat or just float for a minute to catch your breath. That’s a-okay. But really, you’ll find yourself pausing to see how far you’ve come and to take in the whole experience before it’s over. And you’ll be thrilled with the realization that you’re really doing this. And when you reach the beach and find your feet again, having successfully finished the Peaks to Portland swim, you’ll be so glad you decided to sign up in the first place.

Some additional helpful stuff:
– Check out the frequently asked questions and photos from last year.

If you just need someone to give you that last little nudge to sign up, consider this it: SIGN UP. YOU GOT THIS.