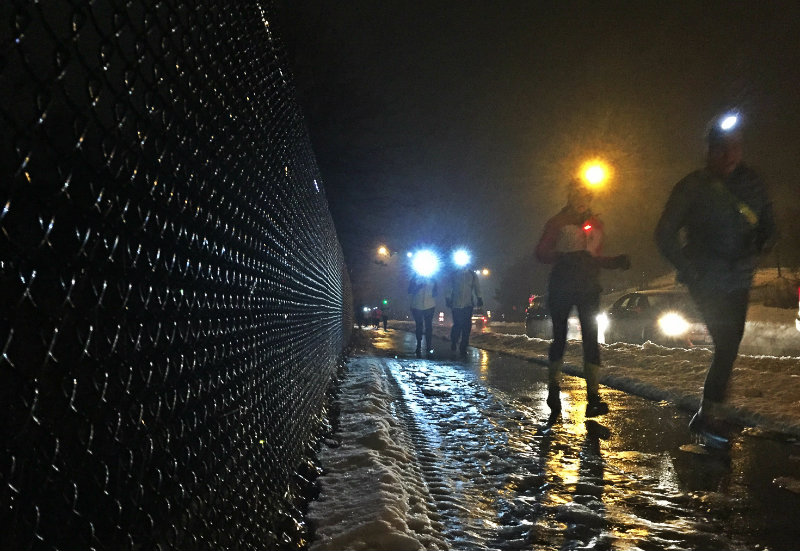 Perhaps you’ve made this “I’m going to run!” claim before (I sure have), but rather than procrastinating it away for another 365 days, you can launch your running career right now with the Winter Warriors running groups offered by Fleet Feet Maine Running.

But if there’s a part of you that wants to run, and you don’t want to do it alone, check out the Winter Warriors run group.

Winter Warriors is FREE to participate in. In fact, each time to show up to a run – whether it’s once a week or three times a week – you’ll accrue points that might even score you some free stuff at the end of the season. You can also accrue points by volunteering or running certain local races (Jimmy The Greeks Frozen 4 Miler, Mid Winter Classic, Irish Road Rover 5K and Kerrymen’s Pub 5K). That’s motivation-via-freebie. And it works.

In Portland, the group meets in a room at the back of the shop, where coaches Dave and Erin go over the evening’s course (which is chosen based on the weather and road/trail conditions), gear, and other info.

When it was time to ready for the inaugural run, folks self-divided into groups based on pace (6-minute mile runners over there, 10-minute mile runners there, and I’ll hang over here with the 13-minute mile group) and then everyone poured out of the shop and onto the street (and into the cold winter rain).

Attendance was impressive for the first night of the run group, despite the fact that it was raining and cold. Around 100 runners are expected to participate this year in Portland alone – and the group can plan on running in all kinds of weather. Wind. Rain. Snow. Cold.

Coach Erin noted that the only time a group run is cancelled is when the shop is closed. And the shop doesn’t close much.

The first night’s route left the Marginal Way shop and headed up onto Munjoy Hill, following the Eastern Promenade to St. Lawrence Street, then North Street and back down toward the store via the Bayside Trail (about 3 miles total, or 5 miles if you ran the Munjoy Hill loop twice, which some people did).

It was every runner for herself on this night, although lots of folks paired up. As slower runners, my cohort Kim and I were still always able to see people in front of us.

And while conditions were soggy and slippery (although not cold at all, once we got moving and our bodies warmed up), it felt good to be running. Or jogging. Or walking. (This group is open to all levels.) And the view of downtown from up on the hill is so neat at night.

While many of the Winter Warriors are experienced runners who’ve participated in this group for years, there were newcomers, too. Plenty of haven’t-run-in-years folks of all speeds and many walkers, too. So whatever your pace (or even if you’re not sure of your pace), you’re welcome here.

Of course gear really matters when you’re running in the winter – especially at night. Here’s the gear coaches request that you have when running with the group (or on your own, for that matter).
1. Reflective vest
2. Headlamp
3. Shoes with traction or a traction device to put on your shoes (i.e. Yaktrax)
4. Base layer (a wicking fabric is recommended)
5. Winter head and hand gear

Run groups have already begun and continue through April 1. So get going, maybe win free stuff, and finally follow through on that promise to “run more” this year.