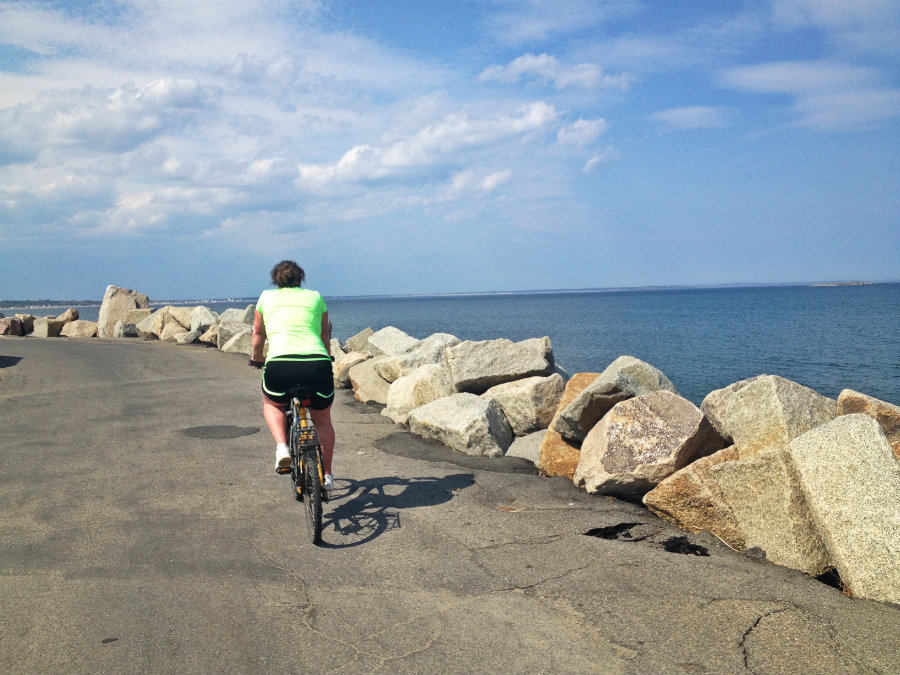 A good weekend bike ride often ends with a beer. Or maybe that’s just me. The beers (and nachos and fries or whatever you’re into) are optional on these rides, but this Bike & Beer series will chart easy-to-moderate rides in Maine that include a stop at a local pub (preferably one with a patio). This is the first. And it’s a ride my friend Liz does all. the. time.

THE RIDE: Starts at the Eastern Trail in Saco near the Hannaford, follows trail to Portland Avenue and Walnut Street in Old Orchard, along Grand Avenue through the heart of Old Orchard Beach, down to Camp Ellis for a stop to walk on the Breakwater, back toward Old Orchard Beach with a stop at Ferry Beach State Park to ride on the trails, then to stop at The Brunswick in Old Orchard Beach for ocean views and refreshments, then back to start.
BONUS: Plenty of scenic stops along the way to follow trails, sit at the beach or walk the breakwater in Camp Ellis. There are several general stores along the way to stop for more water or an ice cream sandwich and you’ll get to cruise through all the activity in OOB (Hey! Stop in a buy a T-shirt).
TERRAIN: Flat gravel/dirt trail to start then flat road. Stop in Ferry Beach is packed dirt trails.
DIFFICULTY: Easy. A manageable hill or two.
DISTANCE: About 18 miles 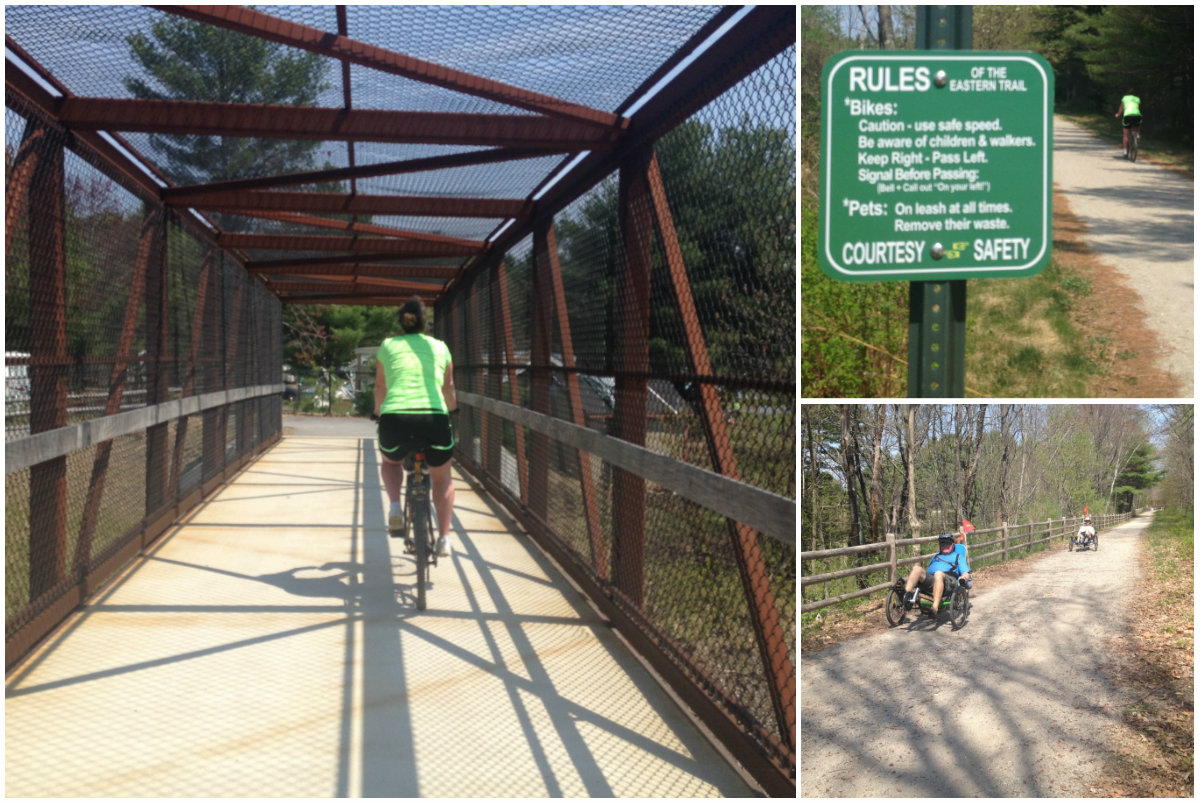 My pal Liz lives in Saco, so we started this ride from her house. And while I’m sure she’d love to have you over, it might be better to find Eastern Trail parking at Thornton Academy or Millbrook Business Park off Route 1 (find recommended places to park).

We picked up the Eastern Trail near the Hannaford on Route 1. The trail is wonderfully flat, straight and mellow. 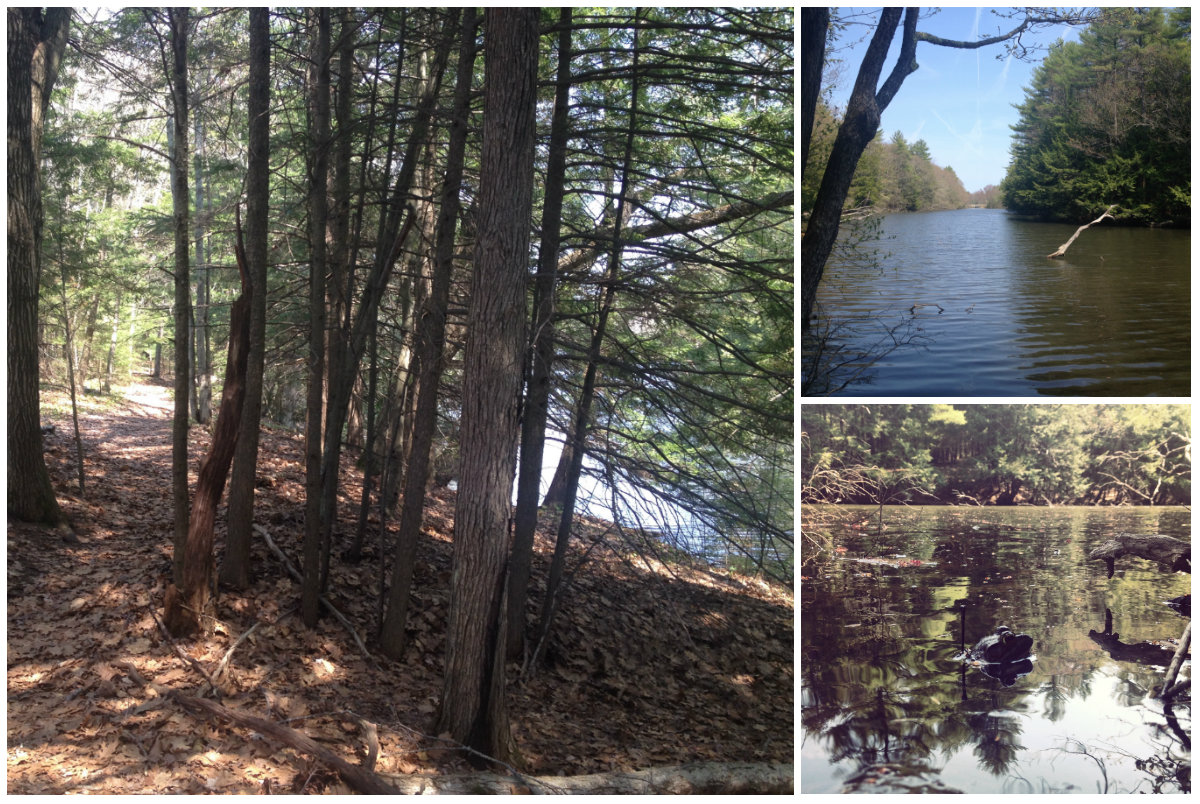 If you keep your eyes peeled along the ride, you’ll spot a small trail system in the trees that allow you to walk down by the river to gawk at frogs. This is a popular trail for good reason, so be ready to wave hello to fellow riders.

We took the Eastern Trail to Milliken Mills Road and took a right, then another right onto Portland Ave. There’s a manageable hill and plenty of shoulder. Then a left onto Walnut Street (if you stayed on Portland Ave, you’ll soon hit Cascade Road, which also dumps out onto Grand Avenue). There’s a general store on the corner of Walnut and Grand Avenue where we popped in for more water, then followed Grand Avenue south (that’s a right off Walnut or Cascade) toward the hubbub of downtown Old Orchard Beach. 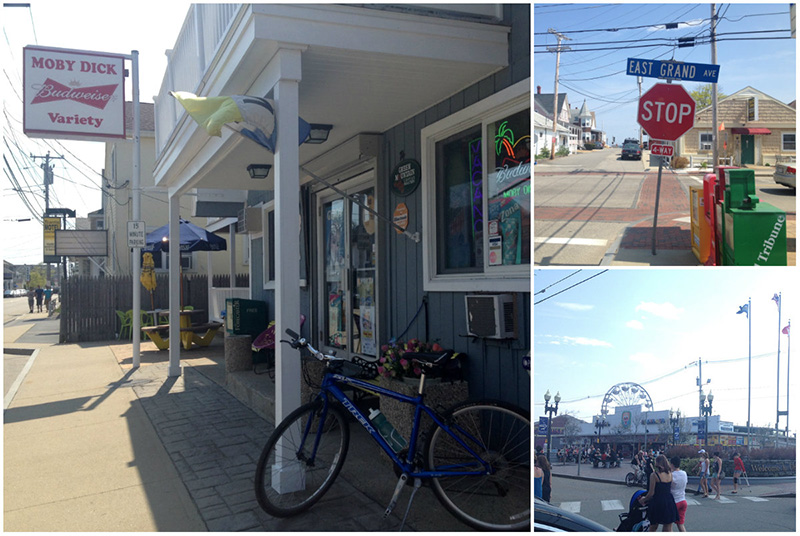 Oh, the T-shirt shops and bars and beachfront motels! We cruised through downtown (being mindful of the traffic and all those people, of course), but no one would judge you if you just had to stop at Palace Playland for a quick round of Skee-ball or hit the candy store for fudge. It happens. 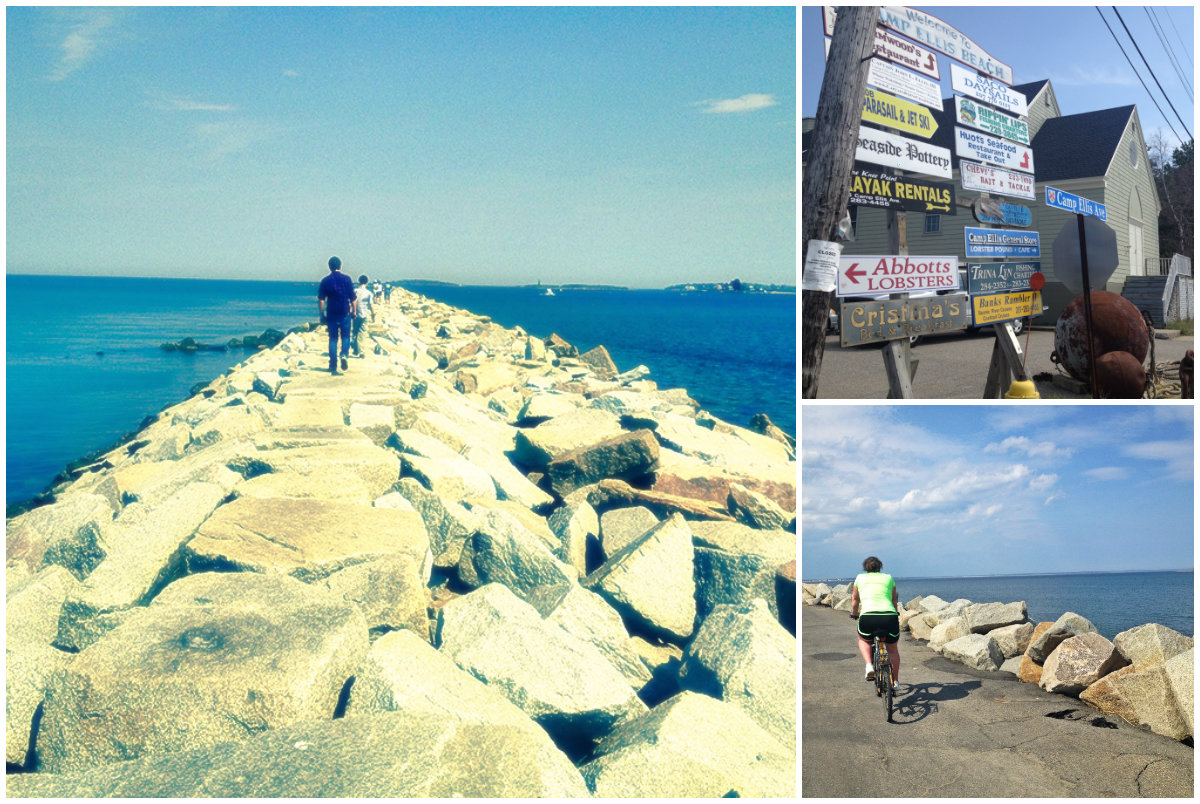 Instead, we kept on Grand Avenue for a few miles until we ended in Camp Ellis. The one-way roads eventually lead to the water’s edge, where the Saco River meets the Atlantic. There’s a boat launch, small beach and Huot’s Seafood Restaurant (clam cakes!). And best of all: the breakwater. Lock up your bike and walk out. Sit. Chill. 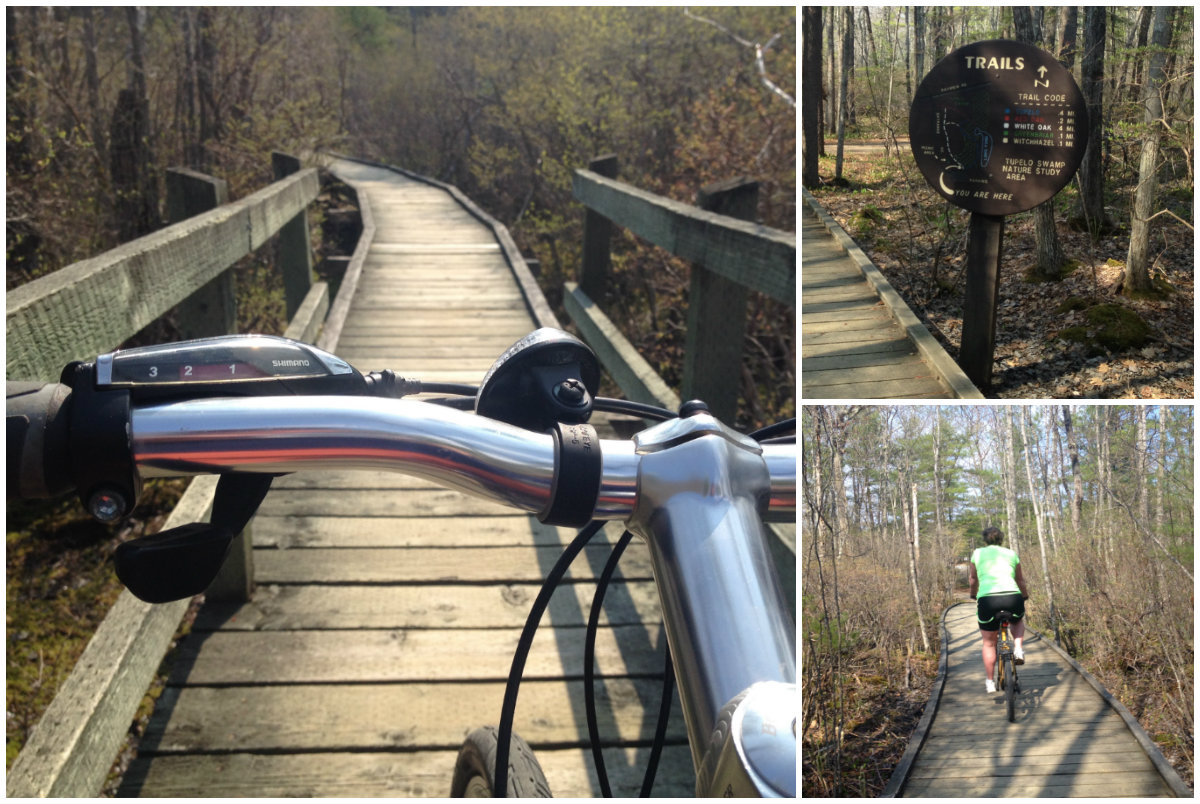 We back tracked toward downtown Old Orchard again, but this time stopped at Ferry Beach State Park for a quick jaunt on the packed dirt trails and cool wooden bridges. One of them is rail-free and rather thin, so remember: Look where you want to go. Don’t look down into the marsh (unless you want to end up in the marsh). The entrance from Grand Avenue to the park is on Bayview Road, which is past the park when heading north. 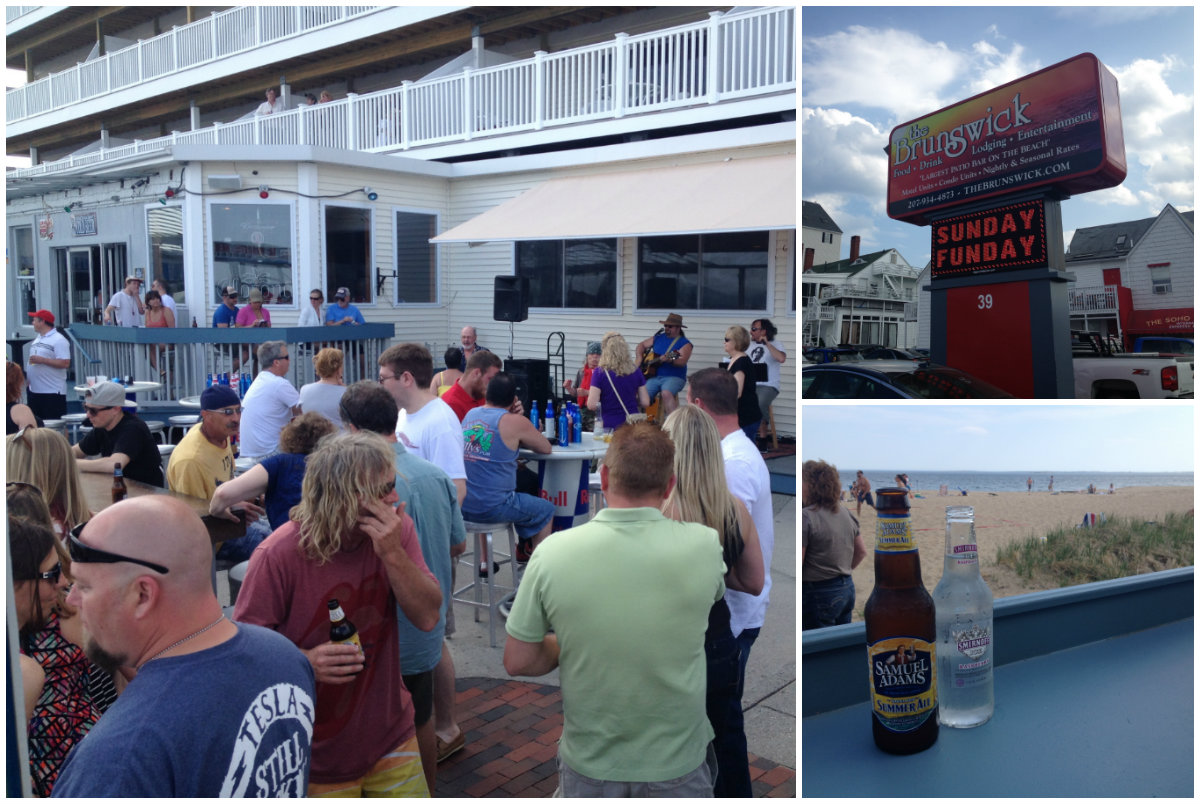 Back onto Grand Avenue and to our final stop in downtown: The Brunswick at 39 W Grand Ave. Liz LOVES The Brunswick. I can understand. There’s beer, a huge patio, and – ah yes, the beach. There’s usually a live band, too. When we were there Mother’s Day Sunday, the patio was packed, people were dancing and locals were enjoying one of the season’s first summer-like days. There’s something about this place that makes you feel like you’re on vacation, too.

Eventually we dragged ourselves away to head home. Riding back north to Old Orchard Street is a a shorter way to get back, but the hill feels way steeper than it really is after you’ve been sitting for a while. So we turn back toward Camp Ellis for a longer – but flatter – route. A right onto Temple Street in Ocean Park and we’re on a quiet road with public buildings, homes and lots of tree shade. Temple eventually meets up with Route 5 (Saco Avenue) where we hang left (tricky intersection with lots of cars coming from multiple directions, so be aware) and follow the signs to stay on Route 5 (and NOT get on 195).

And after our leisurely afternoon tooling around Saco and OOB – the trails! the ocean! – we’re returned back to Route 1. And we go home to nap.

Here’s my attempt at a map. I tried: