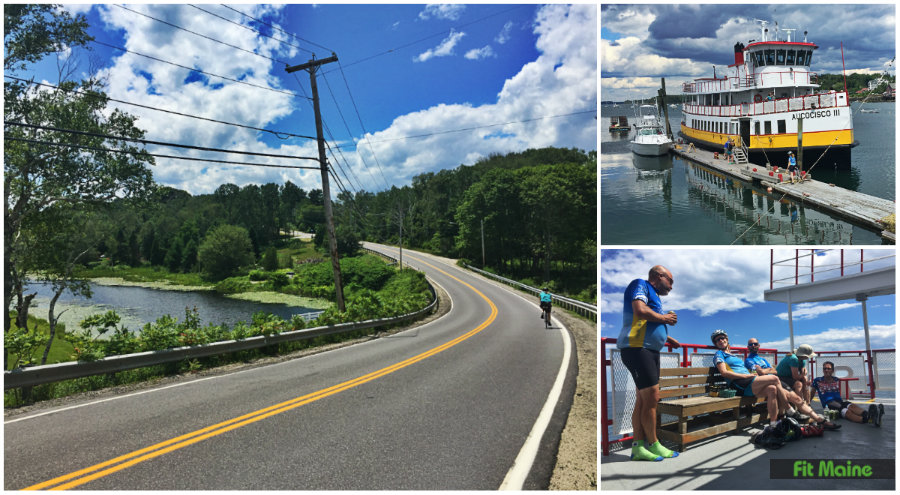 All the joy of a long, scenic bike ride combined with the joy of not having to ride back! This ~45-mile ride starts in Portland (we started from the parking lot at Payson Park, near Back Cove) and ends at Bailey Island, where you can catch the Casco Bay Lines ferry back to town. (And there just happens to be both a sandwich shop and general store near the ferry, so you can get sandwiches and beer for the ferry back. Win win win!)

While I write a lot about organized events, groups, and activities, this is one adventure you’ll do on your own. So go ahead, gather some friends and get out your bikes. (If you need to rent one, check out Allspeed, CycleMainia, Gorham Bike & Ski, all in Portland. Or down on Commercial Street, you can rent a hybrid from Portland EnCYCLEpedia.)

We choose a parking lot at Payson Park in Portland, next to Back Cove, as our meeting place and starting point, taking the Back Cove Trail for a hot minute before turning left onto Veranda Street. One in our party got a flat tire straight out of the gate, so we had the pleasure of pausing to really, really enjoy the views of Back Cove and the Portland skyline. (We can call it a skyline, right? A short skyline?)

Then on to Route 1, past Martin’s Point and Mackworth Island, before bearing right onto Route 88, where the traffic lightens up and the trees begin to crowd the road more.

We stayed on Route 88 for about 8 miles, veering left onto E. Main Street where 88 continues to the right. It’s faster to go right and pick up Route 1, but then you’re on Route 1, with all its speedy traffic. We agreed that a longer (but quieter and more scenic) route was way better.

This meant, once we did hit Route 1, we needed to backtrack a bit to get on S Freeport Road. (Again, you can stay on Route 1, but S Freeport Road is much prettier.) That said, I did neither, since I broke a spoke just outside of Freeport and ended up getting a ride to L.L.Bean while the rest of the group rode on, taking S Freeport Road to Bow Street to Flying Point Road.

Luckily the good people at L.L.Bean’s bike shop were able to squeeze me in and in 30 mins I had a fixed spoke and was ready to ride again! (Well, after another van ride to catch up with the group in Brunswick.)

Our group reunited on the corner of Route 123 and Middle Bay Road, ready to ride on as a generally cohesive unit!

I must warn you, though. The scenery gets increasingly lovely on the Harpswell peninsula, but the HILLS are just as noteworthy. My quads certainly noticed them. After a long ride (part of which I even missed on account of my broken spoke!), those last handful of miles are no breeze. On the upside, they’re the last handful of miles, and we have sandwiches and cold beer and a seat that’s not attached to a bicycle to look forward to!

Just before the cribstone bridge leading to Bailey Island, there’s a sandwich shop and cafe on the right, Prince and Son/Salt Cod Cafe. It’s a fine place to stop for a sandwich on the way to the Casco Bay Lines ferry, which is just up the road.

If you’re in the market for cold beer, you’re going to have to ride on a little farther. The Bailey Island General Store ALSO sells sandwiches and other food, but more importantly, it sells beer. Cold beer.

To get to the general store, you’ll pass the road out to the ferry (which is the same road to Cook’s Lobster House), but not by too far. It’s worth it, I assure you.

No need to seek out a ticket counter before boarding. Instead, you’ll buy tickets on board. A one-way ticket to Portland is $18, and it’s $6.50 for the bike. (We had coupons from the Sunrise Guide and got a few bucks off!) Again, it’s cash only, so heads up!

It’s about an hour and 45 minutes back to Portland, which is just the right amount of time to be able to really relax, give your legs a rest, and enjoy the views.

This cruise is also narrated, so you’ll glean some nice historical tidbits along the way, including details about this monument:

After the hour and 45 minute cruise, we arrived back in Portland around 3:45 p.m. It was just a short jaunt back to our cars at Payson Park (although my tired quads felt every inch of that short jaunt)! Even still, it was a splendid day full of scenic miles both on land and water. I’d do it again in a heartbeat.

Approx. 45 miles, depending on your route
We left Portland a little after 9 a.m. and made the ferry just on time, on account of our flat tires and broken spokes, which delayed our ride. My point: Leave plenty of time to make that 2 p.m. ferry! (And also carry spare tubes, proper tools, and a cell phone, just in case!)
Ferry leaves Bailey Island at 2 p.m. and cost $18 for a ticket, $6.50 for the bike. Buy tickets on board, cash-only.
FMI on the ferry: www.cascobaylines.com