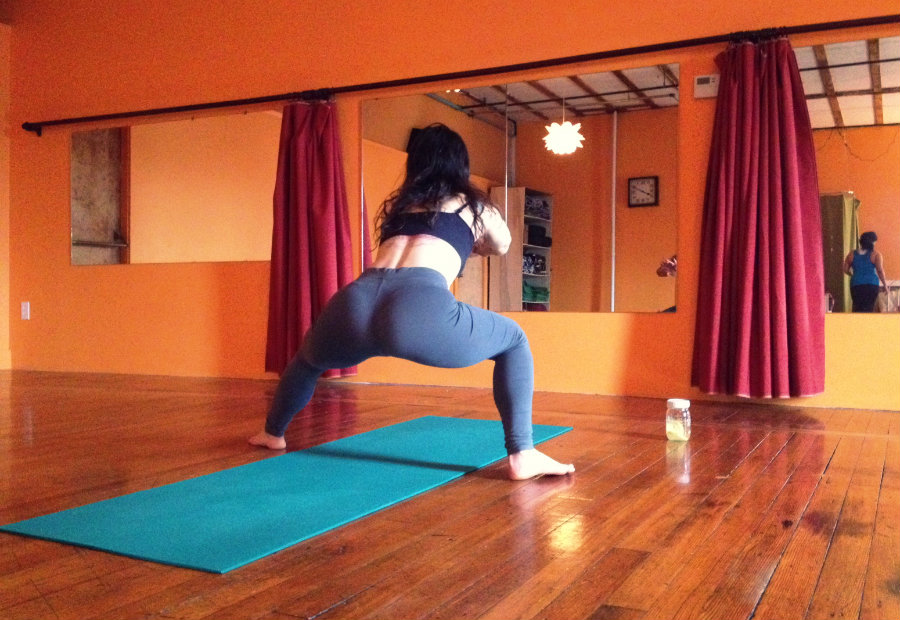 Truth: When I first heard about Buti Yoga, it scared me.

The fitness style – a blend of power yoga, tribal dance and plyometrics – was created in 2010 by a personal trainer named Bizzie Gold and it quickly caught on in bigger cities to our south and west. A couple years ago, it arrived in Maine.

So when I first heard about this thing called Buti (pronounced “booty,” for good reason) I did what any curious exerciser would do: I googled it.

And there, on the screen of my work computer, played a video of a Buti class. There was chest popping. Booty shaking. Circling hips. And I daresay I saw gyrating. It looked naughty.

I closed out the video, fearing my colleagues would see and notify HR. And I thought there was no way my body was going to do that.

Fast forward a couple of years to my recent Buti Yoga class at Hustle and Flow in Portland with owner/instructor Stephanie Harmon.

Stephanie happens to be wonderfully welcoming, which makes a difference when you’re mildly apprehensive about shaking your tush in front of strangers. She’s also really good at Buti – strong and fluid – in an way that’s wildly motivating (“If I keep doing Buti, I’ll eventually look like that, right?” My friend coined the phrase “buttspiration.”)

The music went on, rhythmic and loud, and we moved through a quickly paced set of exercises – spurts of jumps and low pushups and circling hips and planks. At first my eyes avoided the mirror at the front of the room, but I found it actually helped (I don’t know what your body awareness is like, but mine stinks. I’ll think I’m holding my arms out dead straight in warrior pose or keeping my butt down in a plank, but the mirror always proves me wrong. On the upside, the mirror allows me to adjust).

And as the class went on, I let myself stop feeling awkward or worrying about what jiggled or looked weird. Truth was (as it is in most exercise classes) no one else cared. We’re all too focused on what our own bodies are doing and feeling. So I planked and popped to the beat of the music, sweating plenty along the way, and it felt more like dancing than exercise. And it felt spectacular.

Buti Yoga is open to all levels, said Stephanie (for the record, I couldn’t keep up the whole time and had to take breaks to catch my breath or get a drink of water. I did not feel bad about it whatsoever. Buti’s a definite challenge). The point, she added, is for each person to listen to her own body and do what makes sense, whether that’s amping it up or doing modified versions of the exercises. It’s also okay to let your body move in ways your grandma might think impertinent.

There are three Buti Yoga teachers at Hustle and Flow, and while you’ll certainly get a workout at any class you choose, Stephanie noted that her classes are more strength focused, Carla’s classes include more bellydancing and Jamie’s include more cardio. So there you go.