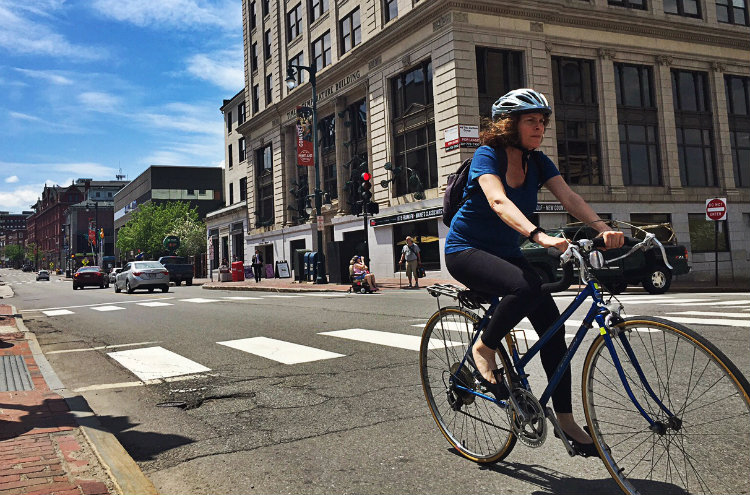 When I was a kid, my biggest bike-riding fear was getting my tire caught in the perilous gap between the sidewalk and the neighbor’s lawn. (Once a tire finds its way there, there’s 100% chance you’re going DOWN.)

Of course, I’m older and wiser now and I ride my bike in the road, like we’re supposed to. So now my biggest bike-riding fear is getting doored. (You know, that surprise collision that occurs when a car door opens in front of a cyclist.) This fear makes me nervous about riding in places with lots of cars parked on the side of the road (I’m looking at you, downtown Portland).

But my fear isn’t the only road-riding worry. I have friends who are skeeved out by the fast-moving traffic on the Casco Bay Bridge or who break into a nervous sweat at the thought of rural roads with no hint of a shoulder. And then there are the semis, the potholes, and those less-than-thoughtful drivers who’ll cut you off just to make it to the burger joint drive-thru 8 seconds fast.

We could let these fears keep us from riding. BUT WE WON’T. Instead, we can learn how to ride with confidence, and Cycling Savvy classes can teach us how. Cycling Savvy is a program of the American Bicycling Education Association. Long story short, they offer classes (in the classroom and on the road) aimed at making us more comfortable riding out in the world. Classes cover things like how to change lanes in traffic, where to position yourself to best be seen or when you’re preparing to turn, and what the law says about your rights to the road as a cyclist. And there are classes right here in southern Maine coming up in early June.

It’s interesting stuff, even if you’ve been riding for a while. I learned quite a bit during a Truth & Techniques of Traffic Cycling class a few weeks ago. Here are 5 of the smart tidbits I picked up:

You’re most likely to get hurt by yourself

Look, no one wants to focus on injuries (bike riding is meant to be fun! Focus on the fun!) but the reality is, injuries happen. There are collisions. Tires get caught in things. But what I found interesting – as someone who’s wildly afraid of getting doored – is that most injuries don’t involve doors or cars or other people. It’s things like slipping in gravel or getting a tire stuck in a drain grate. Still not an awesome way to get hurt, but it at least made me feel like I wasn’t riding around in a world filled with car doors that open like Jack-in-boxes and that, if I rode safely and paid attention, I could have more control over avoiding those injuries.

Don’t let the paint think for you

You know those handy bike lanes with the arrows and/or the pleasant-looking stick man there to guide the way to safe biking glory? Yea, sometimes those arrows and that stick man don’t know what the hell they’re talking about. The point: Pay attention to the lines on the road, of course, but also use your noggin. If it’s actually safer to ride with traffic/take a lane, do that. Don’t let the paint think for you.

Where your shadow’s pointing – they CAN’T SEE YOU!

There are certain times of the day – like when the sun is setting – that make it really, really hard to see, say, pedestrians who are crossing the street or cyclists who are riding in front of you. “Dangit!” I’ve thought in those times. “Don’t they know I can barely see them?!” Well no, they probably don’t realize it, just as I didn’t realize there’s a cool way to tell when you’re in a position that makes it hard for drivers to see you. Check your shadow. When you’re riding in the evening and your long shadow is stretched out along the pavement, look at where it’s pointing. Behind you? To your right side? IN front? The traffic coming from that direction is going to have the sun in their eyes and a harder time seeing you.

“The hand thing is magic”

Even if you’re a confident driver who can boldly change lanes without a second thought, changing lanes on a bicycle (or moving into a lane from the shoulder or bike lane) seems a whole lot more treacherous. If traffic doesn’t want to let you in, there’s not much you can do about it. You’re on a bicycle for cryin’ out loud. Those cars will crush you. Except you can stick your hand out. Drivers actually listen to the hand. It’s incredible. I learned the value of communicating with your hands to indicate to drivers that you want to change lanes or that you’re turning or that Nope, right now is not a good time to pass me. Most driver probably appreciate that they know what you’re doing (and sure, some will still be jerks). But your hands can be magic on the road.

When I ride on the road, my goal is to be as far out of the way as possible. I hug the curb, I dodge potholes in the shoulder, I ride in the “door zone” when passing rows of parked cars. I thought this would keep me safe and out of the way of all that scary moving traffic, except now I’ve put myself in a position to hit a curb, get doored, or let a pothole send me over my handlebars and into a fence post. Ouch. My efforts to be safe actually made riding more dangerous for me. And everyone else (I’m pretty sure most drivers don’t WANT to door a cyclist). Instead, we need to ride big. Make our presence clear!

The Cycling Savvy classes will teach you to ride big and a whole bunch of other stuff, too. Check the Cycling Savvy – Southern Maine page for upcoming classes and to register.

There’s a Truth & Techniques of Traffic Cycling on Thursday, June 2 in Portland from 6-9 p.m.(takes place in the classroom) and a Train Your Bike session on Sunday, June 5 from 9 a.m. to noon (takes place outside in a parking lot). Following the Train Your Bike session, there’s a Tour of Portland ride from noon to 3:30 p.m. The tour will include some of those features you’ll learn about in class (awkward intersections, slender lanes, road with cars parked on the side) so you can put your education into practice in the comfort of a group (and with the guidance of an instructor). The “Truth & Techniques” and “Train your Bike” sessions are required before taking the Tour of Portland.

You’ll be riding big in no time! (And in the meantime, check out 10 tips for successful cycling from Cycling Savvy).

Let's do fun stuff that also happens to be good for our bods.