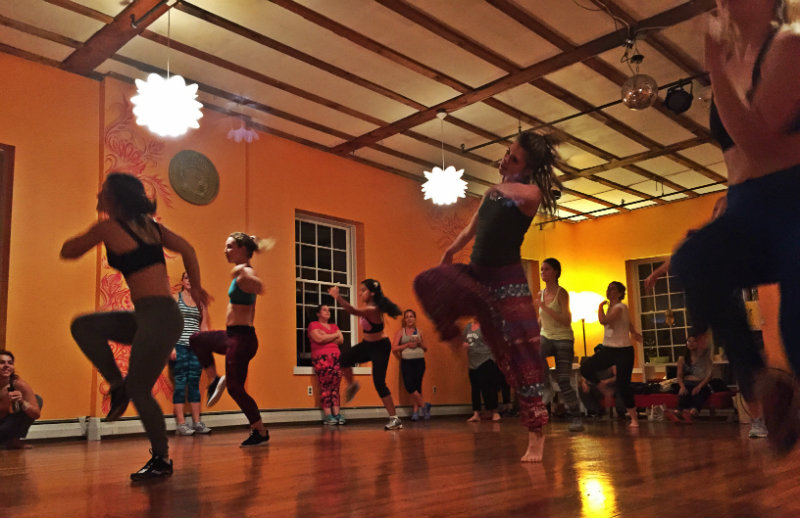 Ten minutes into my first dancehall hip hop class at Hustle and Flow and I was shimmying. I was step-hopping. And I was so lost.

The room was packed with dancers – women and men (okay, one man) four rows deep. I had stationed myself in the way, way back, as far from the mirrored wall as possible (this is the newbie’s “safe zone”). Sure, this position made it hard to see my myself in the mirror (and thus see what I was doing), but that was fine by me. I wanted to dance in ignorant bliss. I wanted to believe that my moves were smooth, my turns on point, my bootie shaking without equal.

Instructor Stephanie Harmon was up in front, walking us through the next bit of choreography. “We’re going to step to the left…two, three, four…the arms can come up here, then we’ll lead with the right foot and five, six, seven, eight…” We followed along, mimicking her movements. We practiced together a few times slowly, then again faster and again to the music.

I thought I had a handle on it (which way my feet were supposed to move, when I was supposed to turn around, or what my arms were supposed to be doing at any given time). But when that music came on – loud and rhythmic and FAST – and everyone in the room began to move in unison, coolly stepping this way, kicking with that foot, shaking their booties at just the right time, I was LOST.

I couldn’t keep up. I couldn’t remember the next steps. And those glimpses of myself I DID get in the mirror? NOT SMOOTH.

I’m used to planks and jumping jacks and simple repetitive movements I learned in elementary school gym class. Choreography is a whole different animal. It’s not like being in a yoga class and copycatting the woman next to you when you can’t understand the teacher’s instructions (press my right palm into my left calf and my reach my left foot to the whaaa?). By the time you copy what the woman next to you is doing, the whole class has already moved ahead five beats. You’re going to have to remember the steps yourself. And that takes practice.

So there I was, stepping and chest popping and swinging my hips, completely out of sync with everyone else in the room. My feet barely kept to the beat and my arms flailed along, doing their best to not get left behind. I did not look very cool or graceful.

But here’s the thing: I had a big happy grin on my face. One of those all-my-teeth-are-showing grins.

I had barely a clue what I was doing, and I was having a grand time.

(It was right about then that someone filled me in on the fact that the class works on the same routine for 3-4 weeks before switching to new choreography, and I just happened to show up on week 4. Guess that explains why everyone else seemed to pick things up so easily. Ego spared! At least a little.)

The energy in this class is so good, too. The music is loud, everyone’s moving and sweating, and all that focus on remembering the choreography means your noggin gets a bit of a workout along with the rest of you.

And for what it’s worth, I did go back the following week when the class was starting new choreography. I still struggled to remember the steps, but so did most of the class. It was nice to know that I was, in fact, completely normal. And each week, you nail down the moves more and more, until voila! You’re DANCING. Maybe even making it look good!

Here’s a video from Hustle and Flow promoting the class (don’t let it intimidate you like I did). Pretty awesome stuff, right?