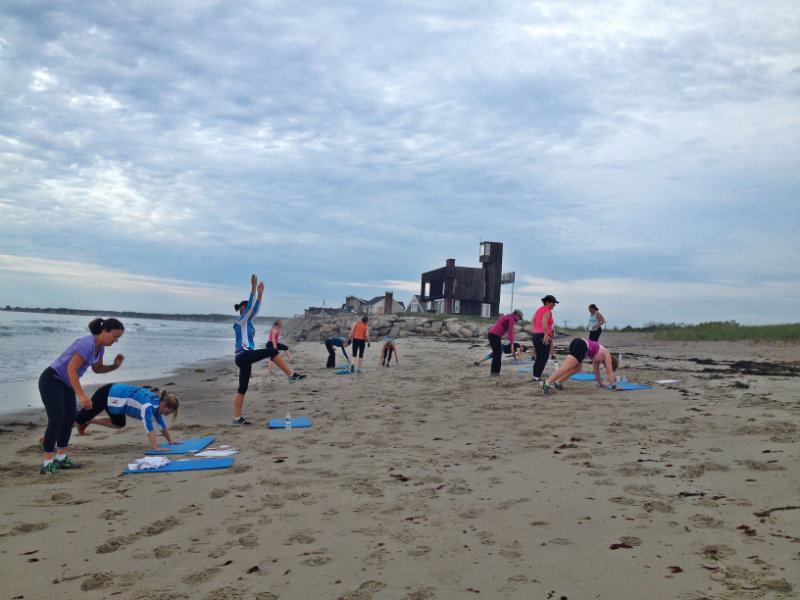 Teams going through the deck with lunges and planks. Shannon Bryan photo

You’ve already mastered supine on the beach (perhaps reclined on the sand with a book on your face), now it’s time to master the beach plank. And the beach lunge and the beach pushup.

These sound like boot camp drills. And they are. But those exercises that seem so arduous at the gym don’t seem so bad when your gym looks like this:

Maybe it’s the expansive Atlantic. Maybe it’s the sand or the salt-smelling air or the drying seaweed that squishes underfoot, but working out on the beach just feels glorious – in a way those gyms could never understand. And Dana Johnson gets it.

Dana is a health coach in Biddeford and the instructor/founder of Biddeford Saco Boot Camp, which takes place on the beach in Biddeford Pool. The boot camps run in the mornings year-round (yep, outside on the beach even when it’s -10 degrees and dark and snowing), but now’s a fine time for us fair-weather boot campers to get in on it.

Classes are held at Fortunes Rocks Beach, Middles Beach and Bath House Beach in Biddeford Pool on Mondays, Wednesdays and Fridays from 6-6:45 a.m. and 8-8:45 a.m. And wow, what a time to be at the beach. The sun is rising. The beach is near empty. And we’re sweating our brains out.

During a recent boot camp, we broke into groups of 3-4 for some friendly competition using a deck of cards. Here’s how it worked: Each suit represented a specific exercise (lunge kicks, squat jumps, side-to-side planks, etc. I’m wishing now that I took a photo of one of the whiteboards, but I didn’t), the number on the card representing the number of reps. Each member of the group grabbed a card, did the associated exercise, then picked another card, did that exercise, and on and on until we got through the deck. First team through the deck got…well, bragging rights.

And every Jack meant the whole group goes for a beach run. Fun!

The deck of cards doesn’t show up every time (although I have to say it was a novel way to work out and I loved it. And while I don’t play poker much, I imagine the next time I do I’ll hit the floor for a half-dozen side-to-side planks the first time I see a six of clubs). Dana mixes it up, so I can only imagine what other mornings look like.

I’m including this photo of an exercise (I think it was called “upside down bugs” or something like that) simply because it’s great and all the awesome women and men in the class will be glad I shared it. Right?!

I generally fatigue halfway through a traditional gym boot camp (because I’m a human, and humans get tired after 30 minutes of squat jumps. Make that 45 seconds of squat jumps). But I felt wonderfully invigorated after this beach boot camp. Was it the ocean? The sand? The sunrise? The fact that I was surrounded by a really fantastic (and welcoming) group of men and women who come out to the beach to kick butt three times a week? It was probably all of those things.

For more information on the classes and sessions: