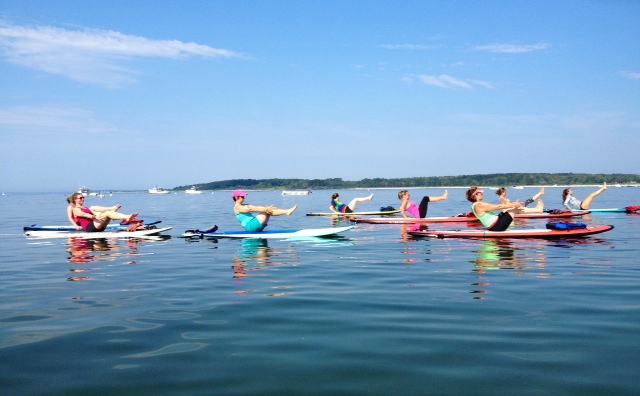 We are lucky humans, you and I. We’re alive at at an incredible time. And thousands of years from know, when archeologists are digging up our homes and bones trying to figure us out, I imagine they’re going to call this period in Earth’s history as the “Yoga on Everything” era – aka the yogazoic period.

By now, you’re likely familiar with the idea. It’s yoga – the downward dogs and planks and twists and triangles you’re perhaps already familiar with – except instead of a mat, there’s a paddleboard under you.

And there’s a class happening Wednesday mornings at Kettle Cove in Cape Elizabeth from 9 to 10:15 a.m. There are also two evening classes from 6 to 7:15 p.m. Tuesday, August 11 and Tuesday, August 25. Class is taught by Brenda Cyr from Willard Beach Studio (she’s a fantastic and welcoming instructor). Class is $15 and you can rent a board (call them at 207-671-2782 by 5 p.m. the evening before!) from SOPOSUP for $15. They’ll even bring it right to Kettle Cove for you that morning, because SOPOSUP is awesome like that.

You’ll start the morning off bringing your board down to the beach and picking up a few rocks to put into your anchor bag (once the group paddles out into the cove a bit – don’t worry, not too far! – you’ll drop the rock-filled bag into the water as an anchor, because no one wants to look up from a plank and find themselves swept out to sea.)

Once everyone’s anchored – leaving room for some natural floating about without bumping into each other – the class begins.

Brenda leads the class through multiple poses, all of which are low-center-of-gravity poses, meaning no one’s going to expect you to bust out tree pose on your first, third or 100th time out (unless you want to try, of course). They’re accessible postures for novices, and if you want to take the pose to the next level, Brenda will guide you.

And in between a three-legged dog and runners lunge, you’ll let yourself take in the fact that you’re out there, on the ocean, surrounded by craggy rocks and morning sun and fishing boats and there’s water lapping at your yoga mat and shore birds chatting each other up nearby and wind and salty air. I don’t care how zen your regular yoga studio is – nothing beats the feeling of yoga on a paddleboard. Trust me.

Now, if you’re really into the idea, but not into, say, plunging headlong into the Atlantic in front of a bunch of strangers and/or not even experienced with yoga, let alone yoga on some totally unstable board thing that you’re pretty sure wants to chuck you, because it’d be funny, then let me say this:

You’re not going to fall off. Probably. I mean, it’s possible, but here’s the thing, you can stay on your knees when paddling to your spot in the cove and you can keep low to the board any time you’re feeling unstable (or the entire class if you need to). So falling isn’t likely, even if you’re new. That said, falling isn’t awful – it’s actually pretty refreshing on these hot summer days. Remember, this is water we swim in – there’s nothing crazy in it, no whirlpools, no beasts. It’s just wonderfully salty (and dare I say warm-ish the last time I went in…I never say “warm-ish” when it comes to Maine water).
Besides, we’re not the kind of people who let the fear of falling (or of not being the perfect yogi) stop us from doing things we’re excited about.

We just do them (and we’re always so glad we did).

Brenda’s paddlboard yoga class is 9 to 10:15 a.m. Wednesday mornings at Kettle Cove in Cape Elizabeth. There are also two evening classes from 6 to 7:15 p.m. Tuesday, August 11 and Tuesday, August 25. Cost is $15. Bring your own board if you have one or you can rent one from SOPOSUP in South Portland for $15. They’ll bring the board to Kettle Cove for you, so you don’t even have to transport it, but you do need to call and reserve a board in advance: 207-671-2782.