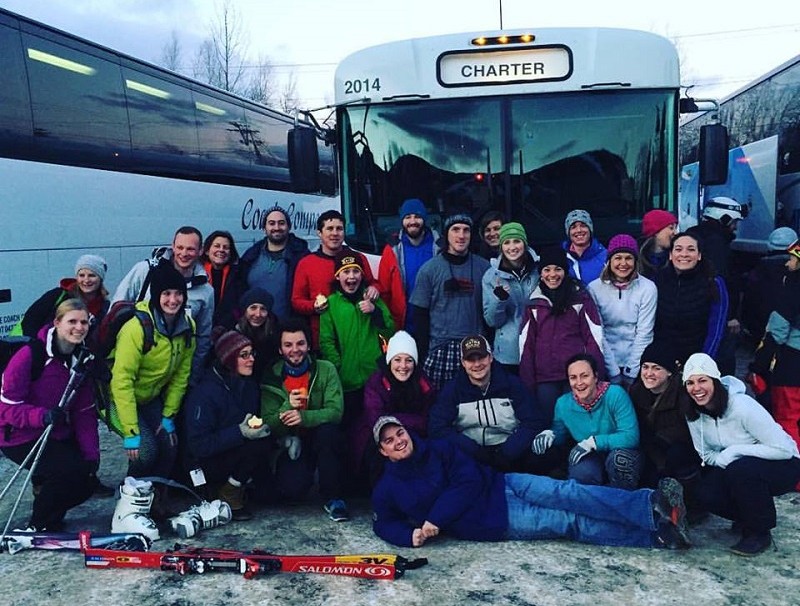 Getting up before dawn on a Saturday – particularly in the dead of winter – isn’t generally something people are eager to do. Because Saturday (and blankets and warm and sleep).

But for the right reasons (say, a carefree bus ride up to Sunday River or Sugarloaf, bagels and coffee, a whole day of skiing and a ride back with snacks, a movie and/or a well-deserved nap), it’s totally worth it.

The ski-and-ride combo is put together by Mainely Ski & Ride, a company started by Portlander Mary-Theresa Tringale (aka, M-T) six years ago. M-T has one goal: To get you to the ski mountain. Even if you don’t have a car. Or you hate driving that far and would rather nap for two hours and simply wake up in front of the base lodge.

I can appreciate that. Sunday River and Sugarloaf (the two mountains Mainely Ski & Rides currently goes to) are a bit of a cruise. And after a long day on the slopes, the two-hour ride home can seem…really long. I’ve certainly done the drive enough times to know. Perhaps you have, too.

A couple of winters ago, I let Mainely Ski & Ride do the driving (er, the VIP bus driver technically did the driving) during a MSR trip to Sunday River. There are perks to getting on the bus, too. Carpooling is good, for starters, plus you’ll be greeted with complimentary coffee, bagels and bananas. You can nap the entire way (as most of the bus did) and you can apres ski to your heart’s content, because you’re not driving. (Even still, exercise responsibility, folks!)

Another notable bonus: That convenience barely costs a thing. An all-day lift ticket to Sunday River on the weekend costs $105. A ride to the mountain, lift ticket, snacks and ride back with Mainely Ski & Ride is $110. That’s the glorious benefit of “group rate” lift tickets. You win. (The Sugarloaf trip, which costs $120, includes a $75 lift ticket, plus the ride up, snacks and ride back.) There are also lift-ticket-only and transportation-only options. And if you’re new to skiing, there’s even a “learn to ski or ride” package that includes a lesson.

The Fit Maine Social Club is joining Mainely Ski and Ride for the Feb 23 trip to Sunday River and club members get a discount!

The bus leaves from and drops off at the Park and Ride on Marginal Way in Portland. It still looked like nighttime when I parked and lugged my skis over to the bus. But there were bagels and coffee waiting. Hurrah.

Most folks slept on the way up, but a few of us in the front chatted the time away (and I found a few fellow “beginner/intermediate” skiers/boarders to hang out with on the slopes).

Once we arrived, folks split up (M-T said riders often go their own way for the day) but I’d made friends on the bus, so lucky me.

After a whole day of skiing, we all met back up at the Foggy Goggle for post-skiing drinks and socializing.

After making sure everyone made it back on the bus to head home, M-T passed out some chips and cheese and crackers. She also popped “The Office” into the DVD player so we could catch a few episode on the ride back to Portland. I think I saw half of one episode before I dozed off.

And then, before I knew it, we were back in Portland. Tired and content (and with really stiff quads).

Was I glad I woke up before dawn that morning? Hell yes.

*The Fit Maine Social Club is joining Mainely Ski and Ride for the Feb 23 trip to Sunday River and club members get a discount!