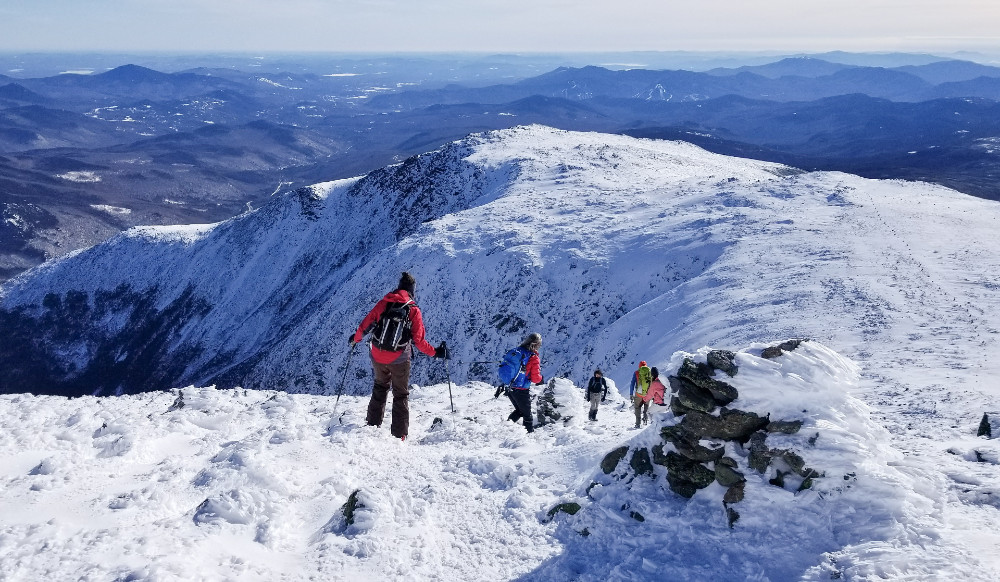 We hiked Mount Washington on the rarest of days.

Blue skies. Sunshine. A forever visibility hindered only by the curve of the Earth. Temperatures hovered in the teens and winds held at 20 MPH, give or take. For Mount Washington in late January, that’s downright balmy.

Most recreational winter hikers would feel quite comfortable in such conditions. And were Mount Washington always so hospitable, we’d all hike it on the regular and meet for picnics in front of the weather station, trading snacks in full glorious view of the Presidential Range.

But that’s not how Mount Washington likes to roll in the winter. Instead, conditions veer into extremes. We’re talking blow-down winds, obliterated visibility, and potentially deadly wind chill.

Mount Washington can be dangerous for hikers, especially in the winter when the consequences of losing the trail, twisting an ankle, or arriving under prepared are so greatly heightened.

But hikers are lured in by high peaks, mesmerizing views, and the promise of physical challenge. And while Mount Washington’s 6,288-foot summit is dwarfed by mountains farther west, it’s still the northeast’s tallest peak AND home to some of the worst weather in the world. Two reasons that make people really really want to hike it. Even in the winter.

I’ve hiked Mount Washington before. In the summer. Even then, we started in tank tops and were bundled in knit hats, wind pants, and fleece by the time we reached the windy, cloud-crowded summit.

But for a winter hike on Washington, I looked to the expertise of an experienced guide.

Also on this guided trek were fellow hikers (and members of the Fit Maine Social Club): Juliette Sutherland, Kelly Millett, and Audra Knippa.

Our morning started before sunrise at Joe Dodge Lodge, where we gathered to gear up and go over the day’s approach. We arrived with full packs, plenty of warm layers, and all the pre-dawn enthusiasm we could muster. Rick supplied us each with mountaineering boots, crampons, and an axe.

Rick got a recent trail report, which noted a bit of ice in some steep sections (hence the moutaineering boots and crampons). Otherwise, the weather was on our side – relatively low winds, clear skies, and sunshine. We set off on the Tuckerman Ravine trail, pleased as punch with our good luck.

The trail begins wide, with plenty of room to hike side by side. The incline is moderate to start, and after a short while begins to climb with more zeal. And by “zeal” I mean some members of our hiking party were panting pretty good. I won’t say who. (It was me.)

Rick joked that he called one particular incline “heart break hill,” because it’s the first elevation gain of any significance and a reminder that this hike ain’t going to be flat or easy.

We were occasionally gifted a few glimpses of Mount Washington in the distance, which we appropriately oohed over – but we didn’t loiter. We had hiking to attend to.

Right here, Rick said, is a good place to put on crampons and add those wind-breaking layers. We also seized the opportunity to get a drink and eat some snacks. 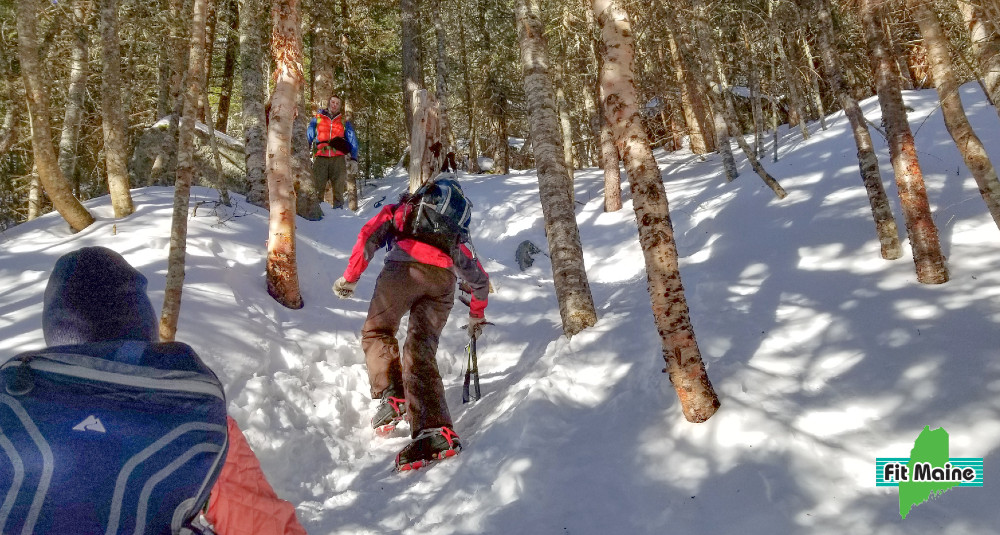 The trail from here gets decidedly more slender and steep. And our calves quickly felt the burn. To help take the pressure off, Rick demonstrated the French Technique: maneuvering close to sideways

It was time to employ the French technique, often used by ice climbers. Toeing into the snow with our mountaineering boots wasn’t going to be sustainable for any great length of time – it’s exhausting on the legs. Rick had demonstrated the French technique for us earlier: side-stepping up the trails, crossing one boot over the other, being mindful to not catch our crampons on our pants or opposite boot. So a-side-stepping we went.

Like much of this hike, we needed to take our time while also not dilly-dallying, and Rick did a great job of reminding us to take breaks and also to move along. We adopted a consistent pace but not so fast that we were drenched in sweat (sweating is inevitable, but sweat-saturated layers will ultimately cool your body down, which isn’t a great idea, even on a relatively comfortable day on the mountain). We took breaks to get water and eat some food, but didn’t rest for too long. Winter days are short and we had a timeline. Plus, we didn’t want our bodies cooling down.

While those crampons were as uncomfortable as all get out, they did come in handy during a short stretch of steep and icy trail. Rick helped each of us climb up one at a time, with him giving us pointers on where to plant our boots or plant our axes.

I’ll be frank: This bit of terrain made me a little nervous. But this is yet another reason why a winter summit with an experienced guide is so wise. Rick offered all the needed encouragement and made sure we all climbed up safely.

And then voila! Above treeline!

We took a short break to get some water and snacks. The winds are typically kicking above treeline. Not so during our hike, but even still, Rick reminded us to put on our warmer layers while we were stopped.

The clear skies gave us views into forever, and we paused to look down into Tuckerman Ravine.

We took a short break at aptly named Split Rock. It’s a sweet photo opp if you can manage it. Since we were ahead of schedule and feeling swell with the conditions, we took our time in this spot.

I’d like to say we took our time to the summit so we could enjoy the views. And that wouldn’t be wrong. The landscape was incredible, a white crust on the wonderful mountain crumples. But I was also moving pretty slowly. My legs and lungs felt strong, but those mountaineering boots definitely took some of the pep from my step. At least I’m going to blame the boots.

One of the many perks to a winter summit: Easy access to the summit sign. We did see a handful of other hikers – no surprise on such a stunner of a day – but it also felt pretty great to be some of the only souls up there. Aside from the good researchers in the observatory, who I am sure were very impressed with us.

Following the obligatory summit photos, we took our time enjoying the top of the mountain. The wind was making itself felt a bit, so we found a building-adjacent spot out of the wind.

Finally, inevitably, it was time to head back down the way we came. 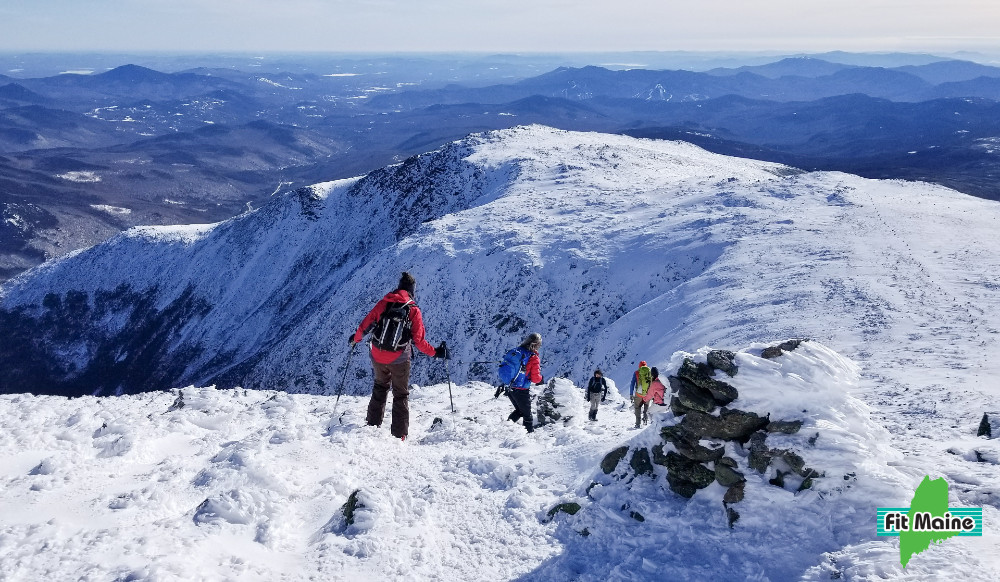 All in the 8.5-mile out-and-back hike took our group a little over 9 hours. By the time we returned to Joe Dodge Lodge, I was spent and ready for hot food and all of the beers. We’d earned all the eating.

But I also couldn’t help but swell with glee just a little – okay, a lot – for a summit reached, a long-standing winter goal attained. Even though those rare mountain conditions made for a fairly routine hike, I’m still really glad we were led by Rick Charity of Maine Alpine Guiding. He knew every step of the trail, made sure we were prepared and moving along in a timely fashion, and also learned us a bunch along the way.

And if conditions had been typical Mount Washington conditions (blaring wind, aggressive cold, and the visibility of the deep sea, well then I would have been even more glad to have an experienced guide leading the way.

If a winter summit of Mount Washington is on your list, reach out to Rick Charity of Maine Alpine Guiding.
www.mainealpineguiding.com and on Facebook

Tips from ems.com: 6 Skills to Know Before Climbing Mount Washington This Winter