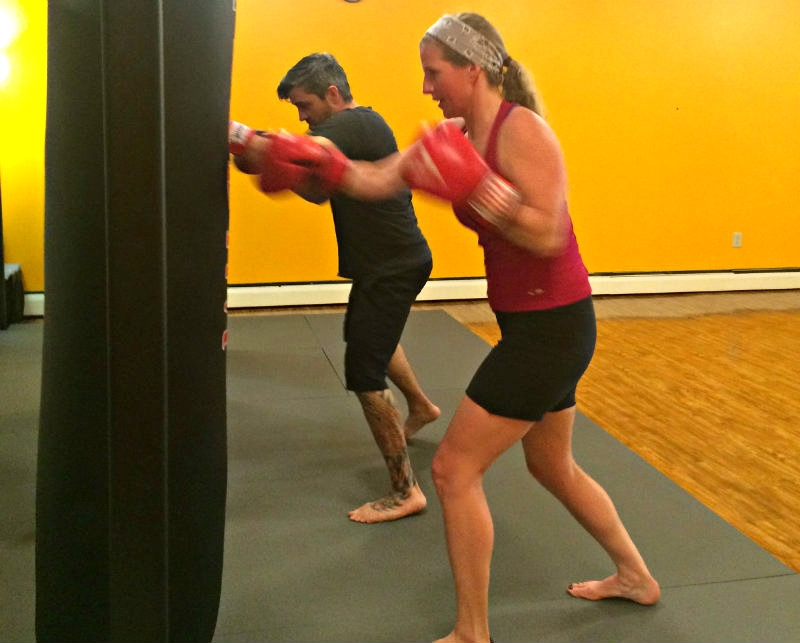 Kickboxing and yoga. Together! Together?

It’s true, these two disciplines don’t seem altogether compatible at first glance. When I first heard that a kickboxing yoga class existed, I imagined leaning into warrior pose before letting a stream of punches fly into a heavy bag, or kicking at aforementioned bag while holding my hands at heart center.

It sounded odd. And sort of awesome.

As it turns out, the kickboxing yoga class is divided into two parts: The first 30 minutes focuses on kickboxing (the proper technique and form) and the remainder of the hour is focused on yoga.

So my vision wasn’t quite right. That’s okay. The pairing is still a fantastic one.

Paul has been a yoga practitioner for a decade and half – he also trains in Muay Thai. As a teacher of both, it was just a matter of time before he combined the two.

And between you and me, the intense cardio of kickboxing and the flexibility and strengthening of yoga make for one serious, sweat-inducing, panting, flushed face kind of workout. (I considered giving future workouts an intensity rating based on how red my face got. KICKASANA would rate as fire engine.)

But as challenging as KICKASANA is – and as exhausted as I was by the end of the hour – I still felt wonderfully strong. Maybe wearing boxing gloves has that effect. Maybe it’s the glorious opportunity to punch and kick the dickens out of something in a socially appropriate environment (take that, frustrating day at work!). Maybe it’s the reality that doing something that’s tough as hell – that really challenges us – is wildly empowering.

The kickboxing-yoga class is open to all levels (I had taken a grand total of two boxing classes over the last three years prior to showing up here, but Paul walked me through the basic techniques before each set and tweaked my form as we went. He’s a welcoming teacher, so don’t let inexperience prevent you from giving KICKASANA a try).

Cost is $15 for a drop-in class or $30 for a week of unlimited classes (for new students only). If you drop-in or are new, you can borrow wraps and gloves. Eventually you’ll want to buy a pair of your own. For more about class descriptions and pricing: www.fearlessphoenixfitness.com/info/

KICKASANA classes are held on Tuesdays, Thursdays and Fridays at 6:30 p.m. (but do check the Fearless Phoenix schedule in case there are changes).