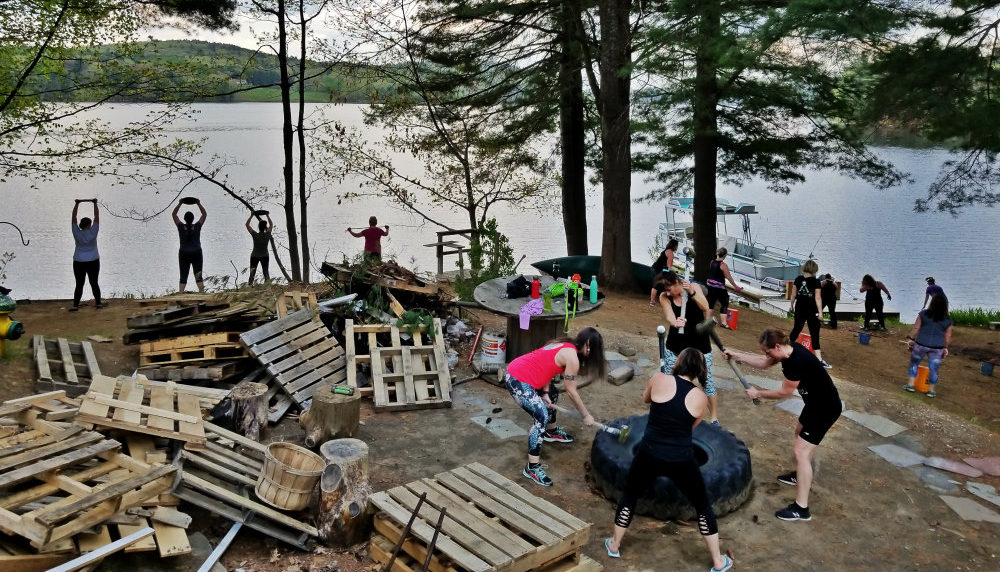 On some level, a gym is a gym.

There’s a row of dumbbells over here, people sweating out some cardio over there. There’s the clank of heavy weights, the squeak of sneakers on linoleum, the upbeat overhead music – the mirrored wall, brightly colored mats, earbuds.

A gym is a gym is a gym. Except at Wolfpack Fitness in Auburn, where half the dumbbells are actually bricks. And instead of mirror-covered walls and rows of treadmills: Trees, tractor tires, and a pond.

Wolfpack is basically the coolest outdoor gym ever.

Located at the end of Waterman Road in Auburn, Wolfpack Fitness is nestled amid tall trees and the sandy shoreline of Gulf Island Pond. And while there does happen to be a pontoon boat tied to the dock, people don’t come here for a leisurely spin on the water. They come to sweat and hit tires with a sledgehammer and carry buckets of rocks and do bear crawls with their hands in the grass and dirt. And they love every minute of it.

Owner Luke Robinson has been leading classes here for several years – all outdoors, year-round, even when it’s snowing and 11 degrees out. And along the way, he’s created a pretty sweet community of people who turn out every week to lift heavy and get stronger and cheer each other on.

And from what I can tell, Ladies’ Lifting Night is flush with dedicated and welcoming women, many of whom have been working out with Luke (and each other) for years. They’re sporting their Wolfpack pride with tanks, t-shirts, and jackets, but they’re still ready to welcome a newbie.

The hour-long workout on Thursday nights is run as a circuit. It varies from week to week, but Luke says he makes a point to include movements that incorporate upper body, lower body and core, as well as some stations that’ll get the heart rate up. When I was there, we did squats with cinder blocks, worked our backs and shoulders with buckets filled with rocks, slammed chains into the dirt, did planks and lunges and, of course, sledgehammered a tire.

Everyone broke into groups of four and rotated through the circuit four times. And because Wolfpack Fitness is aimed at being accessible to everyone (all ages, all levels) every movement has modifications to suit everyone’s level. Luke moves around the entire time, offering tips on form or accommodations where needed (I mentioned my lower back was hurting at one station, so he moved me over to tension bands hooked to tree so I could work the same muscle group without learning over and putting stress on my back).

And all the while, there’s the water and the evergreens and the breeze. And a pretty fantastic soundtrack, too. I can’t speak to what it’s like to work out here in mid-February, but on a warm day when everything’s green and you’re sweating up a storm in a tank top and you can look out at Gulf Island Pond and think, “I’d like to jump into that,” working out here is downright awesome.

At the end of the hour, everyone gathered by the water to cool down. Luke offered up some kudos to women who really killed it that night (including a woman in my group who gave me some solid pointers throughout the workout). And then it was the passing of the Rock Star Parking Pass – a laminated pass that hangs on a rear-view mirror and allows the holder to skips past the parking lot and park right by the house. Each week, the pass is handed off to another person (which is neat in its own right, but also a chance for people to give shoutouts to each other every week, which is even neater).

And then, the obligatory group photo.

I know I already said it, but all ages and fitness levels are welcome here. This is a really non-judgy crew (like someone said to me when I was there, you don’t feel like people are staring at you and judging you like it sometimes feels at other gym). Luke is also accommodating to women who are pregnant or recently gave birth, and he’ll make sure you have all the modifications you need and/or avoid some of the exercises. On the Wolfpack Fitness Facebook page, you’ll also see plenty of video clips and photos of women who work out with infants strapped to their chests or back, too. So this is a 100% mom-friendly environment.

Here’s a video Luke put together that shows what I mean. It’s from the Saturday Primal Fitness class, not Ladies’ Lifting Night, but it still gives you a solid idea of how things roll at Wolfpack:

If you’re interested, check it out on an upcoming Thursday night. Class is only $5, and I promise, you will not miss the mirror-covered walls or the rows of treadmills.