Since Star Wars first came into our lives – when we were 4 or 12 or 35 – we’ve been striking down evildoers with lightsabers of our own design (often in the form of wooden spoons, long sticks, or the cardboard tube from inside a roll of wrapping paper).

We swung our weapons and charged our enemies, displaying the same courage and dexterity as the on-screen Jedi Knight we were pretending to be.

For many of us*, those make-believe battles came to an end decades ago, along with our fort building and backyard treasure hunting. Because lightsabers aren’t real and we’re adults and it’s time to work and be serious and dedicate ourselves to battling the dark forces of office work and unpredictable kitchen appliances.

Except screw that. Lightsabers are being welcomed back into our lives thanks to the growing sport of lightsaber combat.

Lightsaber combat is what it sounds like: duels using a well-known (albeit not real) weapon, the lightsaber. But we’re not talking about those random swings and wacks to the noggin we perpetrated on our school friends and siblings. LudoSport lightsaber combat is a sport, complete with rules, duels, and international ratings.

There’s no choreography here. Students learn seven different combat styles, which draw on multiple forms of martial arts and are built around the capabilities of the lightsaber – if it were real.

Here in Maine, you can master the art at LudoSport Portland, a Lightsaber Combat Academy based out of Maine Warrior Gym in Westbrook. It’s Maine’s only LudoSport Academy, and one of only four in the country. (LudoSport was founded in 2006 in Italy, and there are now academies all over the world.)

The LudoSport academy in Westbrook was opened last year by local Jeff Perry, who has studied the art of Ninjutsu – Budo Taijutsu for over 20 years. (Jeff also teaches Ninjitsu at Maine Warrior Gym.)

Already a student of martial arts, Jeff was drawn to the tenants of LudoSport: service, care and respect. It’s a combat sport, yes, but one built around an altruistic philosophy rather than an adversarial one.

(For example: If a beginner is matched with a more-experienced student, the more-experience student will meet the beginner at his level rather that exploit the advantage. The goal being to raise everyone up, rather than destroying them. “We fight WITH someone, not AGAINST someone.”)

There is no armor in LudoSport, no hitting to the face, no lunging. The rules were crafted with a mind toward safety. The LudoSport lightsaber, while treated as a lethal weapon that can cut through anything during a duel, is fairly harmless otherwise. (The blade is a lightweight flexible polycarbonate, meant to emulate the weightlessness of the on-screen version, which is made of kyber crystal-powered plasma. The hilt is weighted and includes a soundboard for authentic lightsaber sounds.) It was designed for dueling, not just to look cool. (But it also looks cool.)

All students start with a blue-bladed lightsaber. “Later on, they will choose their path and, consequently, the colour of their blade,” according to LudoSport International.

And whether you’re a Star Wars fan or not, holding one of these lightsabers will make you feel mighty.

(Admission: I don’t know Star Wars well. That might explain any fumbles in my descriptions. But when I took hold of a lightsaber – with its purple glow and energized hum – I got giddy. It felt real, like I need to be careful where I pointed it, and I felt suddenly powerful, although my first instinct was to raise it over my head and yell, “I have the power!” Wrong storyline, sorry.)

It’s an effect that seems to happen to most people. “As soon as you put (a lightsaber) in their hand and turn it on, they transform,” said Jeff. And while combat is serious business, LudoSport is ultimately about having fun.

It’s about meeting new people, moving your body, and learning something new. The sport is open to all ages and abilities, and the ultimate goal is to create something positive and engaging out of a mythology that inspires so many people. Besides, said Jeff, “You can’t be too serious holding a lightsaber. It’s not a real weapon.” (Although people are certainly trying.)

You just might find you’re no longer pretending to be the hero. You’ve become the hero.

7-8:30 p.m. Tuesday nights
The Tuesday-night class is for ages 16 and up. Jeff is working on getting a kids class started as well, so check the LudoSport Portland Facebook page for updates.
Maine Warrior Gym, 865 Spring St., Westbrook (class is in the upstairs studio if you enter through MWG’s main doors)
First class is free. $65 month for one class a week
FMI: www.mainewarriorgym.com/classes/jedi-training/
www.facebook.com/ludosportportland.me 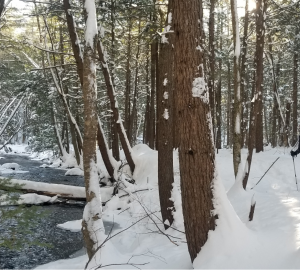