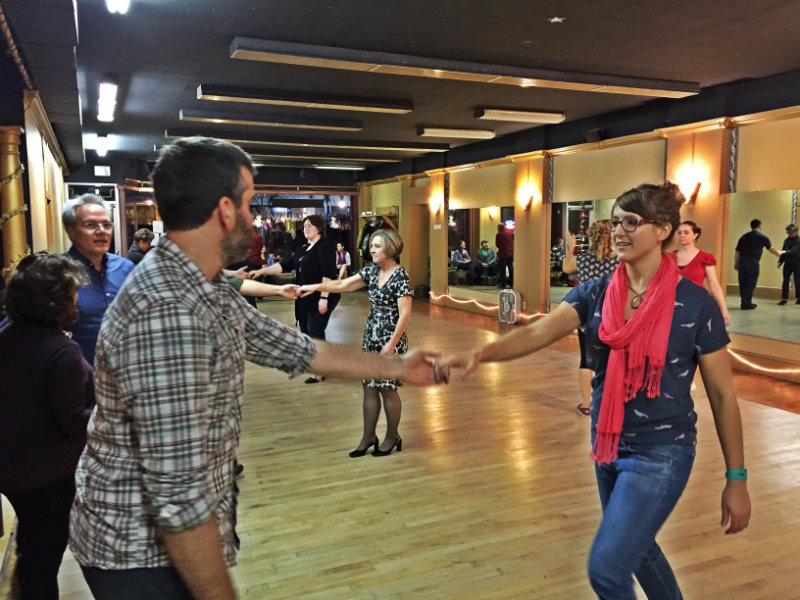 Dancing is a happy affair. No matter the style – modern, swing, ballroom or some peculiar, on-the-fly, enthusiastic invention of our own – dancing is an expression of a good mood. It makes us laugh, even if we’re partly laughing at ourselves and our own dancing ineptitude. Even that is fun.

I can speak with some authority on this because I am a self-described bad dancer. And by “bad” I mean that I’m not great at following steps or following the lead of my partner or looking all that smooth when trying to learn those things. But I still really like dancing, even if it sometimes takes a bit of cajoling (wine?) to get out onto the dance floor and even if more than one person has asked me, mid-song, “What the hell are you doing?”

Of course, folks like me who like to bust a move on the dance floor…or on the sidewalk or in the lunchroom at the office…can always hone our skills (and energy and arms-with-minds-of-their-own) with dance lessons.

Note: When I first wrote this piece, the weekly dances were on Wednesdays and Fridays. They’re now on Thursdays, so I’ve updated the story to reflect that!

A few weeks back, I took a swing dancing lesson with Portland Swing Project. The lesson was part of an ongoing series called Wednesday and Friday Night Stomp (now Thursday Night Stomp). The weekly dances include a half-hour beginner lesson at the beginning, followed by a couple of hours of open dance, where beginners can try out their newly learned moves and more experienced dancers can do what they like to do: swing! Even cooler, the crowd is really welcoming and those more-experienced dancers (some who’ve been dancing for months, some for years) are happy to show us newbies a thing or two.

The lesson was led by Gillian Davis. She founded Portland Swing Project a few years ago after moving back to Maine and realizing the area was lacking one important thing: a vibrate swing dance and music scene. So she decided to create one.

(Gillian was quick to point out that the Maineiac Swing Dancing Society had been teaching and hosting dances in Portland for a few decades before she arrived, but the group had slowed down a bit in recent years, which meant Gillian arrived just in time to pick up the swing-dancing torch.)

Two things are essential, she said, when it comes to creating a good swing dancing scene: “You need good live music and you need teaching.”

And then she started teaching. The Portland Swing Project classes range from single 30-minute sessions (no commitment!) before dances (perfect if you’re curious and just want a quick, low-barrier introduction), 4- to 8-week sessions (great for beginners, these sessions will teach you a lot more) and private lessons.

“There’s an endless amount to learn,” said Gillian. “Even people who have been doing this for 30 years are still learning. If you start taking classes it becomes more fun, the more you learn.”

I arrived partner-less to the beginner lesson before one recent Friday Night Stomp (which is now held on Thursdays). That alone is enough to deter many would-be dancers. But one of the cool things about these lessons is how partners are regularly switched up, so everyone gets to dance with everyone. (Read: No partner? No problem!) Also cool: Everyone is really inviting. Before class even started, I had already met a handful of fellow dancers, some who were also brand-new and other who’d already taken a few lessons.

At first, we split up – leaders on one side of the room, partners on the other (men often lead, but not always) – to reduce confusion over who should be moving which foot where. Gillian stood up front and began with our very first swing step, the rock step.

Then on to the triple step (side together side). And we practiced that several times.

Then in was time to pair up (with more partners than leads, we all spent a few minutes practicing on our own). Gillian was joined by Jen Kain of Lindy Maine to show us how pairs move together. It felt good to practice with a partner and see how the opposing parts fit (and, as Gillian noted, this is a socially acceptable situation to touch other people, which is kinda nice).

High fives were shared as each lead moved on and there was lots of smiling and laughing – and concentrating and (speaking for myself) proclamations of “Oh, I think I got it!”

And then it was time to DANCE. The waiting area had filled with more experienced dancers who now spilled out onto the floor as the DJ turned up the swing music and the lights went down.

“It’s one thing to take a lesson,” said Gillian. “But you need to put what you learned to use on the dance floor.” And so we did.

“What’s so fun to me about this community, it’s tons of different types of people and age ranges, all having such a good time together.”

And it does look like fun. (Seriously, look.) Swing has a special kind of energy that, yes, looks hard, but is also so compelling. I want my hands and feet and body to be able to do that.

“What’s neat about it, you can show up and take a couple lessons and go out and to that the rest of your life,” she said. “This is something you can do forever.”

But you can’t learn it all in one 30-minute lesson, either. So you’ll need to come back and keep at it. “This is no instant gratification,” said Davis. “It takes a little effort to get there.”

So just hang on! And the more you learn, the more fun you’ll have. And isn’t that what dancing’s all about? (Hint: It is!)

Check out the low-barrier 30-minute lesson before the Thursday Night Stomp, which is held on Thursdays at Maine Ballroom, 614 Congress St. in Portland.
Beginning Lesson 7-7:30, Music and Dancing 7:30-9:30
$8 DJ Nights/$10 Band Nights

If you’re ready to take your swing to the next level, sign up for the 4- to 8-week sessions. Or look into private lessons.

For a complete calendar of Swing Dance and Lindy Hop events in southern Maine, check out lindymaine.weebly.com