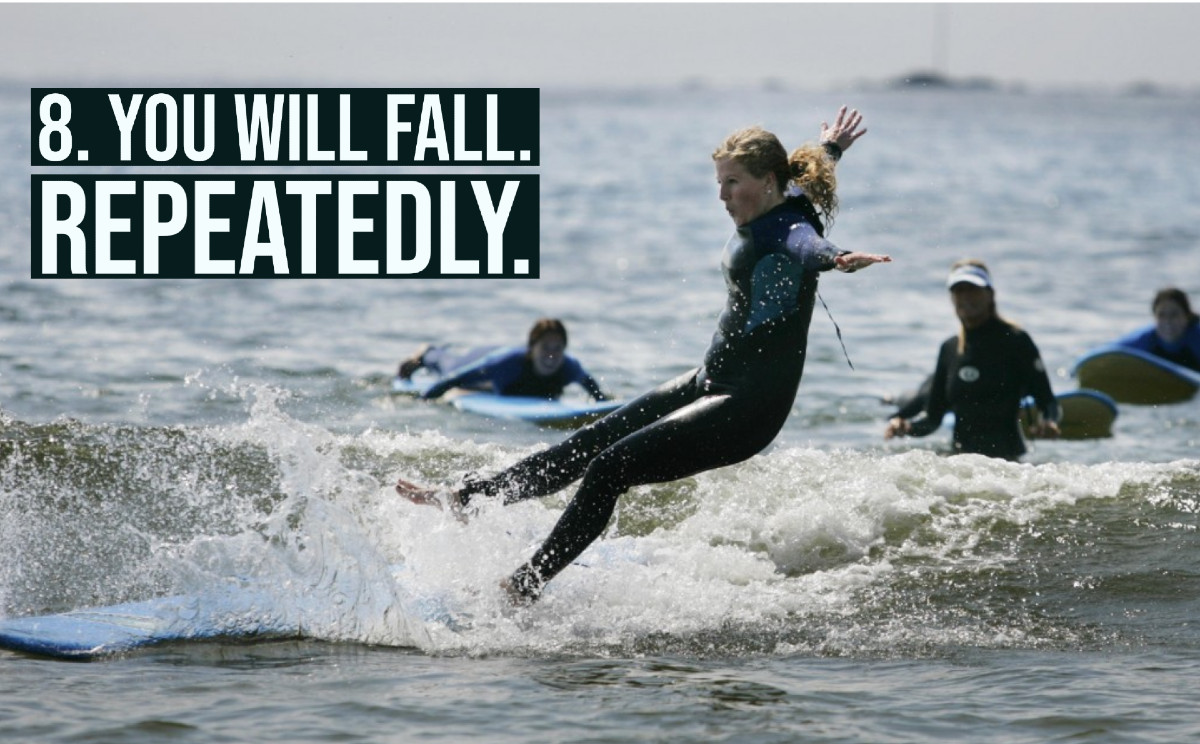 There’s no shortage of adventure in Maine – afternoon jaunts into the woods or on the water, via bicycle or sailboat, in helmet or in harness. It’s been my mission to try them all…eventually. Such exploits are simply fun, for one. They explode our comfort zones and broaden our horizons. And whether the adventure lasts a weekend or an hour, you’ll always have the memories, the helmet cam video, and the minor flesh wound that turns into a minor permanent scar. And you’ll learn some pretty cool things, like how to skeet shoot, work a trapeze, or win a toboggan-themed costume contest.

Over the years, I’ve also learned that I’m an okay skier, an excellent paddleboard jouster, and not trustworthy with a fly fishing rod. But I’ve gained some unexpected life lessons, too – sage words of adventurer’s advice that come in handy long after the crampons come off.

1. Look where you want to go

Everything in sight becomes a hazard when you’re learning how to mountain bike (a rock on the trail, a low-hanging branch, a hill). Never mind the trees that crowd the trail like over-eager bystanders at an illegal street race. During my beginner’s lesson a handful of years ago, I hit a couple of those trees (further deepening my appreciation for helmets and trails with wide berths).

Cliff Krolick, owner of Back Country Excursions and the expert in our pack, offered me some advice: “Wherever your eyes go, your bike will go. So don’t look at the trees, look between the trees. Look where you want to go.” It’s a lesson that serves riders well on heavily wooded mountain trails. But it translates to life at large, too. As in, don’t let your brain dwell on the worst case scenario or those passing peripheral distractions (trees, a rough patch at the office, a kerfuffle with a stranger in a grocery store parking lot). Look where you want to go and the rest of you will follow.

Learned: During the Trek Across Maine

180 miles in three days. It sounds wildly daunting, especially to a rider whose longest treks on two wheels generally hovered in the low double digits. But I had a friend who really wanted to do the Trek Across Maine – and she was hoping to have a cohort out there on the scenic (and sometimes hilly!) roads between Sunday River and the sea. So we both signed up. And we trained, of course, doing our best to log a couple 50-milers in the weeks leading up to the Trek.

But what really made all the difference was some advice I got from an experienced Trekker: Don’t keep thinking about 180 miles. There’s a rest area every 15 miles or so where you can rest, eat, recoup. So just think about doing 15 miles. 15 miles is so doable. Still, I wondered if I’d fatigue halfway through. I wondered if my legs (and butt) would be so sore from day one that I wouldn’t be able to ride on day two. I wondered if I’d end up hitching a ride to Belfast in a service vehicle (ducking low in the seat so as to not be spotted by my fellow riders).

None of those things happened. Sure, the first day was tough. It was cold and rainy, and some of those hills were – ahem – less than friendly to my quads. But mostly, it was stunning Maine and camaraderie and fluffernutters the whole way. My friend and I completed the ride with massive smiles and plenty of shouts and “Hell yes!” and high fives. Turns out those 15 miles really add up.

3. It’s totally impossible. Except it isn’t

Learned: In the Atlantic

I remember hearing about the annual Peaks to Portland swim for the first time and thinking, “Dang. That’s quite a feat for those insanely athletic, experienced, and buoyant people.” It wasn’t an adventure I’d ever be able to tackle. I couldn’t swim, first off, and it’s Casco Bay for wetsuit’s sake! You can’t even see the bottom! But then I found myself in a pool alongside other novice swimmers in a sheJAMs swim class, each of us learning how to put our faces in the water, breathe to the side, and not drown. And then I was in a wetsuit in a lake improving my stroke, spotting my course, and staying calm even when my hand touched a piece of underwater foliage that momentarily felt like it was going to bite. And then I was standing at the Peaks to Portland finish line – big grinned and dripping with saltwater – disbelieving what I’d just done, not because it was some impossible feat, but because it was so, so possible all along.

I’m not afraid of heights. At least I’m not afraid of heights any more than the next person. But ledges? Exposed mountainside ledges that overlook a steep, painful plummet? Yea, I’m afraid of those. The first time I tried hiking the Beehive Trail at Acadia National Park, I made the mistake of turning around to look. Then I had a panic attack, dove for a nearby tree, engaged a death grip on the trunk, and insisted I wasn’t budging until the chopper arrived to fly me to safety. (Ultimately my cohort talked me into going down the way we came up.)

After three years of private shame, I went back. This trail – with its precarious perches and railless ridges – would not defeat me twice. So I hiked up, and I looked forward. And I kept moving and looking forward and stepping and reaching until the top. Don’t get me wrong, I’m a huge advocate of stopping to take in the scenery. But sometimes looking back prevents you from going forward (and missing the scenery at the summit).

Ice isn’t doughy or pillow-like or easy to hold onto. That’s why people who climb ice have axes. But here’s the thing about an axe: It’s only as good as your swing. You can’t gently place an axe into ice. You can’t be delicate or passive or meek with your swing, apologizing along the way for being a burden and promising to be out of the way as soon as you can. The ice won’t accommodate you. It won’t soften its surface to welcome your tools and it certainly won’t give you a boost, even if you’re super polite about it. Rather, you’ve got to swing like you mean it. Make your axe heard! (And zero apologies, please.)

6. You can succeed and still end up floating in a river next to a pile of wet cardboard

Several years ago, the Dyer Library/Saco Museum planned a Cardboard Boat Race in conjunction with a summers worth of Tom Sawyer-themed activities. I decided to write a story about it, and I decided that, if I were going to write a story about building a cardboard boat, I needed to try building a cardboard boat myself. So I did.

With no previous watercraft-building experience whatsoever, I constructed a boat made entirely of cardboard and duct tape. I took it to the Saco River. I got in it. And I paddled. Fast forward several minutes and the pile of wet cardboard formerly known as “Boxed Swine” was floating in the river next to me, and I was without a boat. “So it sank?” people ask. Well, yes, it sank. Eventually. But I also managed to paddle it successfully down the river for several minutes, much to the confusion of the other paddlers on the water. And my boat was made of cardboard! I had no idea what I was doing, but I gave it a go anyway. And IT WORKED! For several glorious minutes! Did I break any cardboard boat records? Nope. But I wasn’t trying to. All I wanted was to build a boat and see if it would float. And it did. Win!

7. If you’re pushing on the door, and it doesn’t open: That’s not the door

Going to someone’s house to climb into a tank of water, close the door, and float in darkness for 90 minutes might not sound like everyone’s cup of tea. But in 2015, after a colleague told me about Float Maine, I was supremely interested in floating for the first time. While Portland does have an excellent commercial float center today, in early 2015 the only float tank I knew of was owned by Neil Sattin. He’d bought the tank because he loved to float and decided to open it up to anyone else who wanted to try. Before I went, I was asking him questions about it. Do people freak out? Is it scary? (Spoiler: Nope and nope.) Neil noted that sometimes, people would forget whether they got into the tank feet first or head first, and when their 90 minutes was up, they’d go to push the door open only to discover it wasn’t opening. But this door was more like a flap – it didn’t even latch – and was made to open by gently pushing on it. So he told people: “If you’re pushing on the door, and it doesn’t open: that’s not the door.” It immediately struck me as excellent life advice. This isn’t to say that there aren’t times when we need to push forward, but often we’re pushing against a wall and wondering why it isn’t opening.

8. You will fall. Repeatedly

I took a surfing lesson a few years back. Not surprisingly, I fell. Repeatedly (and not gracefully). Luckily I was in good company. There were two dozen other novice wave-catchers in the water during that Mom’s Morning surf lesson at Gooch’s Beach. Sure, most of us eventually managed to stay upright on the longboard for a few seconds of triumph, the small waves breaking behind us like churned-up dust behind Greek charioteers. But on the whole, we were backflopping and nose diving in quick succession. We could have felt ridiculous if we compared ourselves to the experienced surfers catching waves with ease nearby, or if we expected perfection the first, second, or tenth time out. But we felt empowered – even as we tumbled. And our efforts might have looked like an exercise in futility to the gulls and passing beach walkers, except we were all having a blast. Why? Falling is part of the learning – meaning, if you’re falling, you’re probably smack dab in the middle of learning something wonderfully new and weird and not easy to master. And that’s downright admirable.

This is Maine. Do stuff. Look ridiculous. Let curiosity get the best of you. Maybe you’ll become a master of mattress racing, storytelling, or sailing. Or maybe you’ll just have a good time trying.