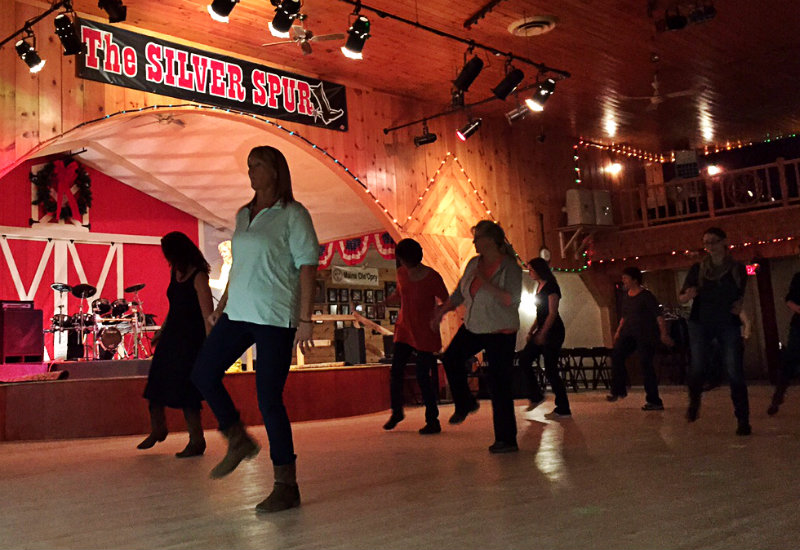 Live country music and dancing fills the dance hall at The Silver Spur in Mechanic Falls on most Friday and Saturday nights. You’re welcome to kick up your heels on the dance floor any way you’d like those nights, whether that’s line dancing or engaging in your own signature moves (which are awesome).

But if you’d like to learn a few line dances to take to back to The Silver Spur – or to bust out later when a line dancing opportunity presents itself or simply because you want to try something new – then mark your calendar for Monday night.

DeeDee Allen, who also owns The Silver Spur, teaches line dancing classes in the dance hall on Monday nights from 6 to 7:30 p.m. The cost is $5 and new dances are taught every week (so you can keep coming back to build up your repertoire). The lessons are open to all levels – this past Monday, there were a handful of beginners, myself included, but definitely a few men and women who moved with such coolness and ease, I’m certain they’ve been line dancing for ages.

DeeDee is good-humored teacher, too – able to explain the steps in an easy way, but also able to make some jokes along the way. It is dancing, after all. It’s supposed to be fun (even when some of us keep turning the wrong way or forgetting the step). (DeeDee also teaches Piloxing, a combination of Pilates, boxing and aerobics, on Tuesdays and Thursdays. More on that.)

Also worth noting: The Silver Spur is BYOB. I didn’t see much drinkin’ during my visit, but that doesn’t mean you shouldn’t gather up a few friends and a bottle of wine and have a grand time line dancing on a Monday night.

After class, you can take home dance sheets with all the steps written out so you can keep practicing.

(TIP: If you’ve never been to The Silver Spur, know there’s a banquet hall AND a dance hall. I inadvertently walked into the banquet hall and stumbled in on a Zumba class…where I stood confused for a few moments thinking, “This doesn’t look like line dancing.” The dance hall door is on the right (when you’re looking at The Spur head on).