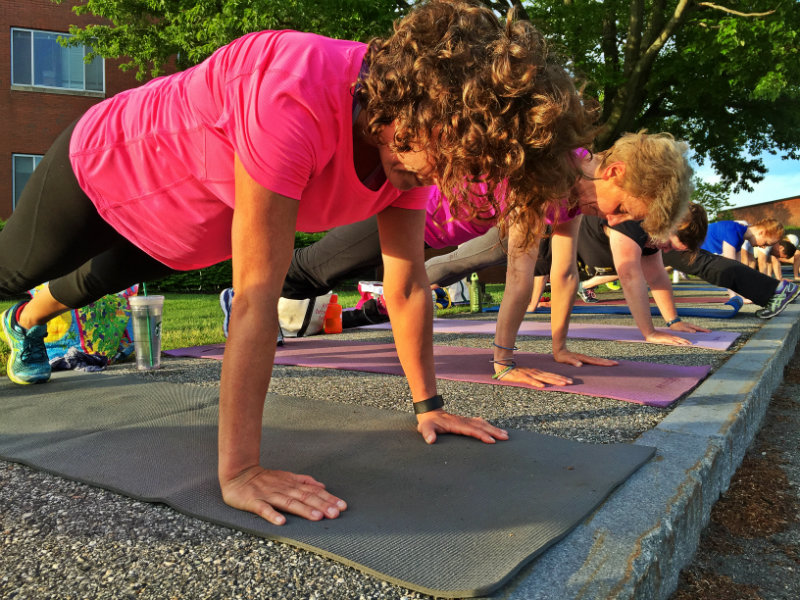 Even for self-described morning people, 5:30 a.m. feels premature for anything other than a leisurely cup of coffee and a mindless scroll through Facebook.

But while so many of us are shaking off sleep as we shuffle into the kitchen – or still contentedly snoozing away – there are a host of early risers starting their days with planks, lunges, high knees, and sweat during Maine Boot Camp.

Maine Boot Camp takes place on the grounds at Cheverus High School in Portland, long before the teachers and students start arriving to begin first period. Founder Casey Ericson has been running the boot camp for 9 years. It’s moved around a bit in that time, but has had a year-round home at Cheverus for a while. Some campers (as Casey calls them) have been working out with Maine Boot Camp for years.

The boot camp runs in 4-week sessions, Monday through Friday, from 5:30 a.m. to 6:30 a.m. Workouts take place outside, even in the winter, unless the weather is really awful, in which case it moves into the gym. But outside is always the preference, said Casey.

“For some people, this is the only time they’re going to be outside all day,” she said. Maine Boot Camp lets campers put their best foot forward first thing in the morning – and they’ll carry that with them all day.

The specific workouts change from one day to the next, but there’s a consistent theme to Casey’s instruction: She will get you to push yourself, and you will sweat. And pant. And maybe yell out a “holy quadriceps!” halfway through a set of reverse lunges. (Or perhaps that’s just me.)

My recent visit to this boot camp started with a few laps around the high school (and wow, the view of Back Cove and downtown Portland from this campus is beautiful!) and a warmup on our mats, which we laid out in a row on the sidewalk in front of the school.

My heart-rate was elevated before the high knees across the parking lot even began. We did a series of planks, reverse lunges off the sidewalk curb (“Try to touch your knee to the ground!” Casey said), and crunches. And we ran down to the Cheverus track (I say “down” because there’s a nice little hill there that’s a *joy* to run back up) and along the perimeter of the parking lot. Many times.

We were all working very hard, with Casey helping to correct our form and calling out, “Looking good, guys, keep it up!” Someone noted the time at one point: “We’re over half-way!” Hallelujah!

Even though most of the campers were regulars (some for years, as I mentioned), this is an incredibly welcoming group. Folks were chatty and in good spirits, even as we panted up that little hill or jokingly pleaded for a break during a plank.

And when 6:30 a.m. finally came, and I was drenched with perspiration, red faced, and thoroughly spent, I understood what’s kept campers coming back week after week, even in the cold months. It felt stupendous to have worked hard, challenged myself, and done my body good so early in the morning. And I did carry that feeling with me the rest of the day. (The soreness in my quads stuck around even longer!)

If your routine has gone to the wayside this summer, and you’re looking to get back into a workout habit, Maine Boot Camp could be just the thing. The next session starts Monday, Sept. 11 (see the full camp calendar).

There’s a 3-days-a-week commitment for new campers, but that can be spread out in various ways. (For example: 3 days a week times four weeks equals 12 days for the session, so you can move those days around, or use them all later in the session if you sign up after the session begins.) Returning campers can choose from 2, 3, 4 or 5 days a week.

In between sessions, there’s generally intersession, which is drop-in classes held on Tuesdays and Thursdays, 5:30-6:300 a.m.