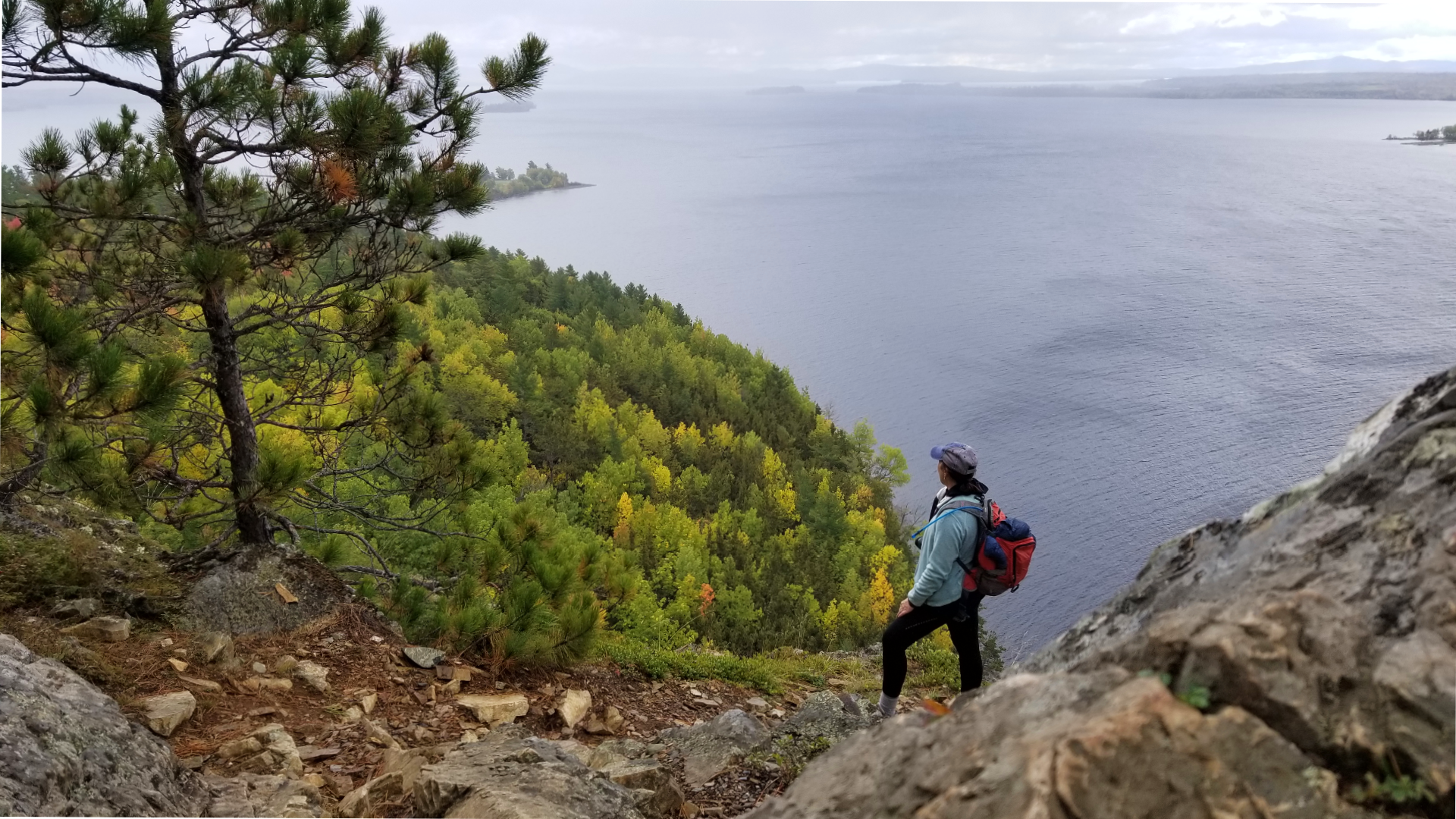 It’s definitely the boat ride over on Moosehead Lake that makes a visit to Mount Kineo State Park so alluring – bouncing through the chop toward a handsome wall of rock that grows bigger by the minute.

Of course it could also be Kineo’s striking cliffs, which rise up 700 dramatic feet and form a rhyolite wedge on the lake’s surface, like a water skiing ramp for giants.

And then there’s that fire tower at the top, offering 360-degree views of Moosehead Lake as well as other neighborhood summits like Little Kineo, Big and Little Spencer Mountains, and Big Moose, among others.

Frankly, it’s all of these things.

Stationed on the edge of Moosehead Lake across from Rockwood, Mount Kineo’s charm comes from it’s not-so-easy accessibility and it’s unique shape and composition.

You need a boat to get there in the warmer months. If you don’t have a boat, Mount Kineo Golf Club ferries golfers and hikers between the Rockwood town landing and Kineo every hour or so during peak season and a few times a day in the shoulder months. The trip take about 10 minutes and cost is $12 per person, cash only. Kids under 5 and dogs are free.

In the winter, when Moosehead is covered in ice, Kineo-goers can simply snowshoe on over.

When my friend Melanie and I visited in early October, the boat was still running a few times a day (if my memory serves, it was the last weekend of service for the year).

It happened to be a drizzly, windy, and brisk fall day. But like I said, it was the last weekend for the boat and we’d planned this trek weeks earlier and so we were going, dangit. Besides, a little wind and rain ain’t no thing to most hikers, although Melanie and I were the only passengers on the boat.

Obviously we took seats near the front – but not the very front. Cold lake water was splashing in as we plowed toward Kineo.

After 10 splashing minutes, we arrived.

The Mount Kineo Golf Course has a clubhouse with a small menu of foodstuffs and bathrooms, which the staff were kind enough to let us use. But do note that the golf course is on private property and isn’t part of Mount Kineo State Park – so don’t be wandering around over there.

There’s a smidge more than six miles of trail here and a few options for reaching the summit and the fire tower (which aren’t in the same spot). The Indian Trail (0.9 miles) is the steeper and more challenging route up. It also offers the best views. The Bridle Trails (1.1 miles) is easier and follows the original fire warden trail before eventually meeting up with the Indian Trail. The Carriage Trail (2.2 miles) is easy-going and follows the shoreline along the west side of the peninsula all the way to Hardscrabble Point. From there you can continue on to the North Trail (1.9 miles), which follow the shoreline on the eastern side of the peninsula before climbing up more steeply to the fire tower.

The Carriage Trail is a scenic delight. It’s wide and well-packed path follows the shoreline, so hikers are treated to lake views to the left and steep rock face to the right.

After 0.6 miles, the Indian Trail branches off and immediately up. (Stay on the Carriage Trail a little while longer to reach the easier Bridle Trail.)

It’s steep and rocky and rootsy – my favorite kind of trail but one that requires attention to foot placement and sometimes grabbing things with your hands. I happen to dig a good scramble, so I loved it.

The views on the Indian Trail are glorious – and a great excuse to take a break from the steep scramblin’.

Our cold, rainy day ended up being pretty swell – the overcast skies making the fall colors seem bolder and the wind a non-event once we were in the trees.

The summit and the fire tower aren’t in the same spot. I’ll be honest, I was so focused on the fire that I can’t recall if we actually stopped to appreciate the actual summit. The trails here are well marked, so I’m almost certain the summit is marked. But we were on mission.

There’s been a fire lookout on Mount Kineo since 1910 (first a wood house, then a steel tower). The tower was regularly staffed until 1962. Then in 1993, the tower was restored and converted to an observation tower by the Maine Conservation Corps. From the top: incredible 360-degree views.

With an elevation gain around 900 feet, this hike will certainly get your heart rate up. But the adventure of shuttling over by boat and hiking up for cliff views makes this trek a cool day trip that feels like a bigger adventure.

Also: Mount Kineo is part of the Moosehead Pinnacle Pursuit, a six-mountain hiking challenge in the Moosehead Lake region, so consider tackling some other hikes in the area, too.

Also: Kineo is said to contain one of the largest formations of rhyolite in the world – the rock formed as a volcanic plug when magma hardened in an active volcano. That rock was once used by Indians to craft arrowheads, hatchets, chisels, etc. and has been found all over New England and farther south. Neat!

Get there: From the blinking light in the center of Greenville travel north 19.5 miles on Route 6/15. Turn right on a road marked with signs for the Rockwood Town Landing and docks. From the Rockwood docks it is about a 10 minute ferry ride to Kineo. The ride costs $12 per person and is cash only.