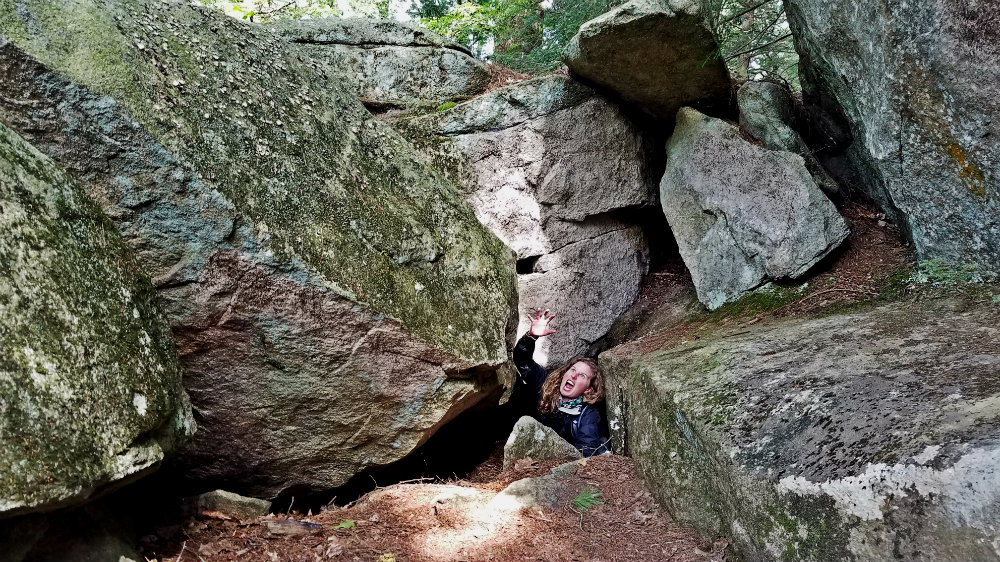 Inspired by Halloween, Wendy and I re-enacted our own version of Murderer's Cave, which turned out to be nothing close to the truth. Wendy Almeida photo

We were supposed to be on an island gawking at a lighthouse. But when our trip to Seguin, located off the coast of Phippsburg, was thwarted by rough waters, my friend Wendy and I sought out a new plan.

We didn’t intend to go poking around inside the hideout of a murderer. That just sort of happened.

But now, I’m getting ahead of myself. When we first pulled into the parking lot at Thorne Head Preserve in Bath, we had nothing on our minds but the pure thoughts of easy-going coastal trails. And sandwiches. (We’d packed lunches for Seguin Island and lunchtime was nearing – but one must first find an appropriately scenic spot to eat such a meal.) My point: We were thinking about entirely non-murderous things.

This 96-acre plot of land between Whiskeag Creek and the Kennebec River was purchased by the Kennebec Estuary Land Trust almost two decades ago. It currently boasts a few miles of easy-to-moderate terrain, including the .75-mile Narrows Trail along the water, and the Whiskeag Trail, which follows the creek and connects Thorne Head Preserve with the Bath Area Family YMCA (a total one-way trip of 5.1 miles).

The trails are free to use and dogs on leash are welcome. In addition being a nice place for hiking and trail running, Thorne Head is open to mountain bikers, too.

It was on the Mushroom Cap Trail, as we loitered by the “mushroom cap,” a stone sculpture that does, indeed, look like a mushroom, and enjoyed views of the Kennebec through the trees, that Wendy noted something interesting on the trail map: Murderer’s Cave.

A little black dot noted the location of Murderer’s Cave, off the Ridge Runner Trail. Murder?! We went straight for it.

But the opening belies the space behind it – to some extent, at least. It’s still small in cave terms, but there’s plenty of wiggle room inside. Or should I say murder room?

***
Okay, here’s where the upbeat hiking story turns a little dark. I’m going to talk about murder and executions gone wrong, so if those things make you shudder, skip ahead.
***

At the time, we had not a clue how Murderer’s Cave got its name. But being well-versed in the story lines on Dateline and Cold Case Files, combined with an active imagination that bends toward the macabre, I figured this must be the location of some serial killer’s horrific work. Was it a body dump? The scene of a still-unsolved crime? I strained my eyes to look for bone fragments or finger-nail marks or dark stains on the rock (horror movies always have those things). But alas, nothing but dried pine needles, lichen, and some flustered spiders who weren’t expecting my company.

It wasn’t until I got home and googled that I learned the true story behind the Murderer’s Cave moniker.

Back in 1883, this cave was the hideout of two “ne’er do well sailors” named Daniel Wilkinson and John Ewitt. On the night of September 4, 1883, the duo attempted to rob the D.C. Gould Ship Chandlery and Provision Store in Bath. Constable William Lawrence (known to the townspeople as “Uncle Billy”) happened to be patrolling the area and came upon the two thieves as they ran from the building. Wilkinson pulled out a .32 caliber revolver and shot Constable Lawrence in the head, killing him. Both Wilkinson and Ewitt fled the scene – Ewitt all the way to England. Wilkison was captured less than a week later (accounts differ as to where he was captured – some say he hid out back in Murderer’s Cave, others report he was arrested in Bangor). Wilkinson was tried, convicted, and sentenced to death by hanging (all of the 21 people executed in Maine were hanged).

“The death sentence was carried out at the Maine State Prison in Thomaston on November 21, 1885. Wilkinson did not die instantly from the hanging but slowly died of strangulation. The nature of Wilkinson’s death, which was similar to the executions of two other inmates the previous April, was used by anti-death penalty activists to argue that Maine should abolish the death penalty, which it did in 1887.” – via murderpedia.org

Daniel Wilkinson was the last person executed by the state of Maine. (The first person executed in Maine was “Goodwife” Cornish of York, who was convicted of bludgeoning her husband Richard to death in 1644. “Officials found him impaled on a stake and floating in the York River.” Mrs. Cornish was described as a “lewd woman” who had affairs with men in town. One of her lovers was also suspected of the crime, and both were forced to undergo a “trial by touch” – the belief being that a dead person’s body would bleed when touched by the murderer. When Mrs. Cornish touched her husband’s corpse, it supposedly bled, and that was enough evidence to convict her. It also bled when her lover touched the body, but he was not convicted of the crime.)

***
And now, back to our regularly scheduled discussion of Thorne Head Preserve
***

Both the Stone Steps Trail and Mushroom Cap Trail lead down toward the water’s edge, where there are open spots to sit, take in the view, and eat a sandwich if you’ve got one.

Thorne Head Preserve is a splendid place for a quick run or an afternoon of wandering and staring at the water. It’s also a reminder than we don’t have to go far to find cool pockets of Maine that feel removed from the bustle, even if we’re just a short drive from the grocery store.

At the end of High Street in Bath. (From downtown, take High Street north – High Street dead ends into the parking lot of the preserve). [Get directions]
Dogs are welcome if leashed.
Download the trail guide [PDF]
FMI: www.kennebecestuary.org/thorne-head-bath/