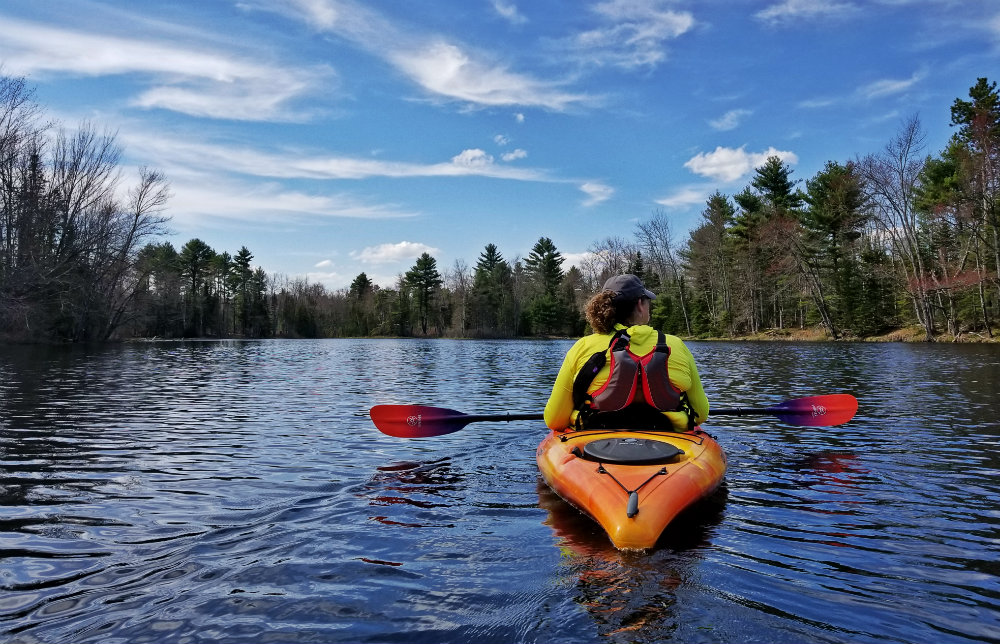 Maine is a paddler’s dream! Between the coastal routes, winding rivers, scenic marshes and big lakes, there’s no shortage of new adventures for kayakers and paddleboarders. Still, it’s easy to fall into paddle ruts, ending up at the same few ponds or rivers over and over. (Ferry Beach in Scarborough as the sun’s going down is a personal favorite).

There ain’t no shame in returning to an old standby – if you love it, keep paddling it! But if you’re looking to explore new-to-you waters (or if you’re new to paddling and aren’t sure where to begin), there’s a recently published guide that can help: “Paddling Southern Maine: Day Trips for Recreational Kayakers, Canoers, and SUPers”.

Authored by Sandy Moore, an ACA (American Canoe-Kayak-SUP-Raft-Rescue Association) kayak instructor from Brunswick and Kimberlee Bennett, an avid kayaker from Portland (who also writes the blog kayakinginmaine.blogspot.com), it’s flush with paddles from Wells to Winthrop, Denmark to Bristol. Some are coastal, most are inland, and all are meant for recreational paddlers – many are superb for beginners, too. “The whole goal is trying to make (paddling) not intimidate people, so you can find that one trip that’s going to get you out there,” says Sandy.

The paddles listed in “Paddling Southern Maine” were chosen because they’re accessible, they have parking, and they begin and end in the same spot. The book also includes great details, like landmarks to look for, tips for launching, route suggestions, and the sort of insider info you’d get from a friend. And that’s by design. Kimberlee and Sandy want you to get on the water and have a fabulous experience.

“I wanted to take something I love and share it with other people,” says Kimberlee. “(Paddling) is a lifelong thing people can do. It’s not specific to any age or level…the only requirement is you want to be on the water.”

If you’re already a paddle-lover, then you understand. If you’re just starting out, get ready to fall in love!

In honor of the book and the start of paddling season, Sandy and Kimberlee were kind enough to share some of their favorite paddles. (Okay, “favorite” isn’t quite right. As Sandy said, she’ll get excited about every one listed in the book, but I pressed them both for a few notable ones to share. Of course, buy the book to get them all!) So, some of Sandy and Kimberlee’s “favorites:”

EASY-GOING PADDLES (GREAT FOR BEGINNERS, TOO!)

It’s ideal for families and beginner paddlers, says Kimberlee. Plus you’re always going to see frogs and turtles. Shaw Park is one of the places she likes to rally friends and colleagues for after-work paddles in the summer. She calls them “‘yak attacks.” Gorham Recreation rents kayaks here, so you don’t even need to bring your own boat (and you don’t have to be a resident to rent, either).
Launch: Shaw Park in Gorham. Route 237 to Partridge Lane and follow it to the end into Shaw Park. Go through gated area to reach parking area.
Route: Head north toward the train trestle and, farther up, Babb’s bridge.

Kennebunk Pond is perfect for paddlers trying out new equipment (or skills) or anyone looking for a chill option because it’s small and accessible, there’s easy parking, and it’s fairly shallow (until it isn’t). “You’re going out and out for and you’re just waist high for longest time,” says Sandy. “It has a drop, though.” That shallow area, which stretches about 175 yards from the beach, means the water warms up earlier in the season than most other ponds. After that is a ridge that surrounds a much chillier 43-foot basin.
Launch: On Kennebunk Pond Road in Lymam. Take Route 111 (Alfred Road) to Kennebunk Pond Road and follow it 1.7 miles. Parking on right, beach on left.
Route: Wherever you’d like to go!

The Songo River sees boat traffic coming and going through the Locks (there’s a cash fee to go through), but on the river they move slowly and in spurts, so there’s plenty of quiet time to paddle and explore river’s nooks and crannies. If you launch from Sebago Lake State Park (there’s a fee to enter the park, you can go left into Sebago Lake (there’s a sandbar close by to loiter on and swim) or go right toward the Locks.
Launch: From Sebago Lake State Park, Park Access Road or from the Songo Locks picnic area off State Park Road (parking area is on the left). If you cross the swing bridge, you’ve gone too far.

This one is “a blast,” says Sandy. “You feel like you’re on the ocean, but it’s a river.” True, there’s limited parking here, you might end up walking in mud flats when the tide is low, and you’ll likely get stuck in traffic on the way there during peak paddling months, but yes, Sandy says, take this trip. It’s really cool and totally worth it. The route goes by the botanical gardens and there are kelp gardens to admire and “seals galore.”
Launch: Barters Island Road, Boothbay. Pass Coastal Maine Botanical Gardens on left and Knickerbocker Lake recreational area on right. Carry-in boat launch is on left at the bottom of the hill.
Route: Mind the tides! Low tide will make putting in and taking out less fun, and some areas will be tougher to navigate. Go left (under the bridge) and around the top of Hodgdon Island. You can keep going and paddle around the Ram Island Ledges or into the cove at Porter Preserve. Return the same way, or go around the bottom of Hodgdon Island.

“It’s beautiful and so picturesque,” says Sandy. “I wouldn’t hesitate to say I’d do that on any given day.” It’s a great intro to saltwater paddling, Kimberlee and Sandy say, where you can explore protected coves and inlets and spy for seals, kingfishers, terns, and ducks.
Launch: Mere Point Road, Brunswick, past Paul’s Marina. Launch is on left. Large paved parking lot with ample parking.
Route: Head north (left off the ramp) and follow the coastline past White Island and Crow Island HHLT Preserve. Return the same way.

FAVORITE “DISCOVERIES” WHILE RESEARCHING THE BOOK

Sandy thought she might be in the wrong place when she first ventured to Stovers Point. It looked like private property. But this area is owned and maintained by the Harpswell Heritage Land Trust owns and maintains it. And thank goodness, she says, because Stovers Point is gorgeous. “You might hesitate (when you first arrive), there’s this huge ledge and you feel like you need a Jeep with really big wheels, and then you get out onto this little peninsula and the views are just amazing. You can swim, there’s a little tidal area, and it’s right in view of the cribstone bridge. It’s such a cool place. It took my breathe away…. As you paddle into the cove, it’s a postcard.” So if you’re headed there and start to think you’re in the wrong place, Sandy says, keep going!
Launch: At the end of Windsor Lane, Harpswell (it’s a narrow dirt road off Stovers Point Road). Take Route 123 (Harpswell Neck Road) in Harpswell to Stovers Cove Road, turn left, then right onto Stovers Point Road, then left onto Windsor Lane. Gravel parking areas.
Route: Consider heading north into Harpswell Sound (it’s more protected with less crosscurrent and boat traffic, say Sandy and Kim).

It’s all about the shipwreck, says Kimberlee. When she first discovered this paddle, which begins in the marsh and winds up on the coast a Higgins Beach, she was excited to find that it combined wildlife spotting (she’s known for snapping photos of all the birds, frogs, turtles, and seals she sees) with a beach walk AND a shipwreck, because how often do you stumble on one of those? “I hadn’t dared go to tidal places before,” she says. But she was lured by the bird life along the river and the ability to walk Higgins Beach, where the shipwreck lies.
Launch: On Route 77 in Scarborough, just east of Sawyer Street (look for signs for Rachel Carson Wildlife Refuge). There’s a small parking lot and pier – launch from shore on north side of pier.
Route: Head south toward Higgins Beach and keep your eyes peeled for snowy egrets. The channel widens as you get closer to the ocean (Kimberleeand Sandy recommend pulling your boat out before hitting open ocean), and you can pull your boat onto the beach and explore the shipwreck (mind the tides, of course!).

“People don’t think of it often,” says Kimberlee. “It looks like such a small place…but you can paddle around all these offshoots and other places to explore. I think it’s unexpected.” It’s tranquil and you can sometimes hear the foghorn from Portland Head Light. You’ll need to carry your boat/board about 0.2 miles to the edge of the pond (so bring a cart if you have one).
Launch: Fenway Road, Cape Elizabeth. Park in the cul-de-sac and respect nearby homes and residents.
Route: Explore all the offshoots!

Strong winds can make paddling tougher (or simply less fun), especially for novice paddlers. Always always check conditions before you head out, but if it’s kinda windy and you’d like a good place to paddle, try Tenny River. The river connects Crescent Lake and Panther Pond, so you really get options here (the river is more protected from the wind – Crescent Lake and Panther Pond will still feel it!). The river is super shallow in spots and winds gently between the lakes.
Launch: Off Webbs Mills Road, near the intersection with Plains Road, in Raymond. Park on the road and carry boat/board to cement ramp.
Route: The launch puts you into Crescent Lake. Go right to connect with the Tenny River and head toward Panther Pond.

To find out more about these paddles and so many more, buy the book! And let Kimberlee and Sandy guide you to a host of new paddling adventures. Like Kim says, “Have kayak, will travel.”

FitMaine.com is a participant in the Amazon Services LLC Associates Program, an affiliate advertising program designed to provide a means for sites to earn advertising fees by advertising and linking to Amazon.com.