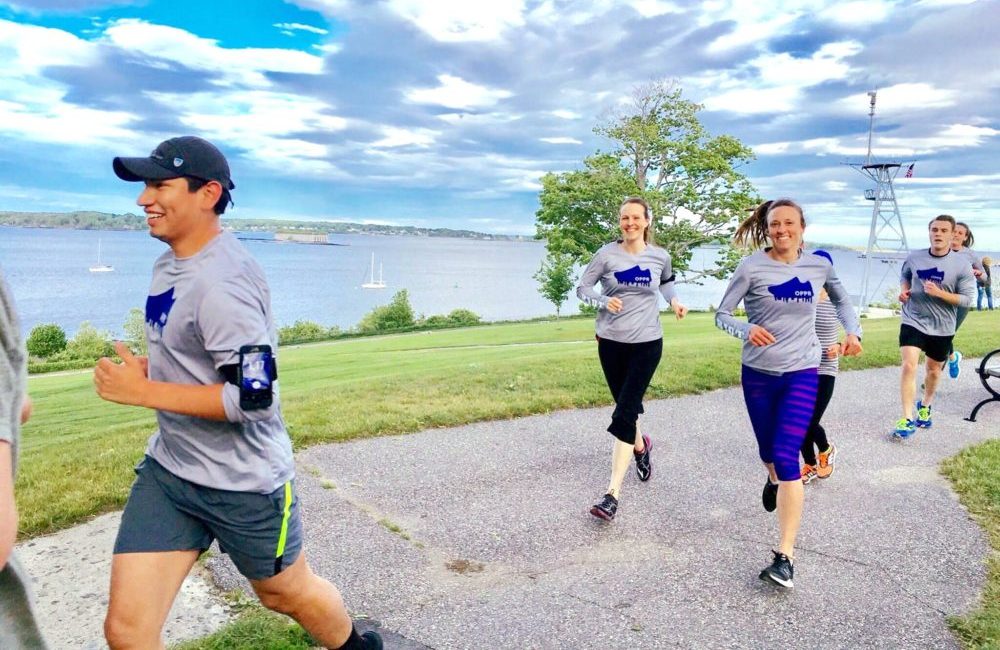 Whether you run just for fun or you’re training for a particular race, running with other people can make those miles even better. There are a number of running groups around the state – most are year-round, some end at a local pub for beers and socializing, and others include training programs to help you improve your speed and distance. All come with awesome running camaraderie.

The Sub5 Track Club is a membership running club open to runners of all levels – including folks who are just getting into running. Membership is $20 for an individual or family, and $10 for students. There are Monday evening group runs, often leaving from Sea Dog in Bangor, which are open to anyone. In the summer, there are members-only Wednesday evening track workouts in Brewer, geared to help with performance for upcoming races. Membership also includes discounts at some sporting shops and race entry.
Find them:
Facebook group | www.sub5.com

A free running club in Bridgton. All people and running levels welcome for a group run Wednesdays at 5:30 p.m. Afterward, feel free to socialize or have a drink or two at The Tap House (make sure to bring some money and your ID)!
Find them:
Facebook page

Free group runs on trails around the Midcoast all year long. Runs take place multiple times a week, including the Sunday Trail Runday on Sunday mornings and Monday Night Dirt on Monday evenings, Wednesday Morning Romp, and TGIF Morning Madness on Fridays. Locations include Erickson Field in Rockport and Camden Hills State Park and Camden Snow Bowl. Often, runners convene at a local watering hole after the run! I checked them out a couple years ago: Monday Night Dirt: Into the woods with Trail Runners of Midcoast Maine
Find them:
Facebook group | Facebook page | www.trailrunnersofmidcoastmaine.com

Join the Hampden area run club every Tuesday night at 5:30 p.m. for a group run on area roads. The group meets in the parking lot by EMMC Family Medicine (Erickson’s Hardware). Don’t worry about being fast – they keep it at an easy pace so we can all jog and chat.
Find them:
Facebook page

The MissFits of Maine are more than a running group – they also go adventuring in other ways (like hikes and ice skating). But their Friday Happy Hour Run is an awesome time to join them. Runs begin and end at Old Vines Wine Bar or Garden Street Bowl, depending on the week (and, you guessed it, runners often head inside for drinks and socializing). Open to walkers and runners, distances can range from 2-4+ miles. There are also small group runs in the mornings and on weekends. You can post to the page to find a fellow runner any time, too! I checked them out a couple of years ago: Meet the MissFits of Maine in Kennebunk: Group runs, weekend fun & happy hour
Find them:
Facebook page

Join this free Pub Club on the first Wednesday of the month all year for a casual 4-5 kilometer group run. The run starts at 5:30 p.m. from Baxter Brewing Co. in Lewiston. Afterward, head into Baxter Brewing Co for a dinner/beer specials. In their words, runs are “followed, as always, by heaping plates of spaghetti and cold draft beer.”
Find them:
5km Pub Club on Facebook

They’re a “welcoming, encouraging and supportive group of crazy people who run the roads and trails of way Downeast Maine, the Canadian Borderlands, and beyond.” All levels are welcome and run distances range fro 1 mile to 50 miles and on anything from smooth tar to rugged single track. Club runs take place most Sundays at 7 a.m. somewhere in coastal Washington County or just over the border in Hancock County or Charlotte County, Canada (location and time set by group leader). You can also organize your own run and invite the group. Membership is $10 annually.
Find them:
Facebook page | Facebook group | www.boldcoastrunners.org

Based in Southern Maine, Trail Monster Running hosts regular group runs, Fat Ass events, and races throughout the year to bring together members of the trail running community, from 5k cross-country races to 100 milers. All abilities welcome, so long as you have a serious interest in trail running, which includes being actively engaged in the trail running community by volunteering at races, participating in trail maintenance, hosting group runs and consistently demonstrating your love of trail running.
Find them:
Facebook page | trailmonsterrunning.com

Fleet Feet Maine Running has year-round free run clubs at their locations in both Portland and Brunswick. Group runs are open to runners of all levels and include weekday runs of 3-5 miles and a longer run on Saturdays. If you’re training for a race (like the Beach to Beacon perhaps), Fleet Feet also has great training programs
Find them:
www.fleetfeet.com/s/maine/fleetfeetrunningclub

This free weekly run group starts and ends at Liquid Riot Bottling Co. every Thursday at 6:15 p.m., year-round. It’s welcoming to runners of all levels and typically offers a couple different running distances. Afterward, head back into Liquid Riot for beers and socializing!
Find them:
Facebook page | www.oldportpubrun.com

The newest group in Portland is a local chapter of Trail Sisters, a women’s trail running community. While trail running is their jam, they do some road running in the spring depending on trail conditions. In April, they’re meeting Monday evenings at 6:30 p.m. at Baxter Woods in Portland.
Find them:
Facebook group | www.trailsisters.net/groups/portland-maine

A free, all-levels running group in Portland. Regular runs include the Sunday Runday runs, which depart from Coffee By Design on Diamond Street and range from 4-13+ miles.
Find them:
Facebook page | Facebook group | www.thickquadsquad.com

Free group runs a few times a week, including a Back Cove run on Tuesday mornings, Pub Run on Wednesday evenings, Trail Run on Thursday mornings, and Long Trail Run on Sundays. The pub runs move around the greater Portland area and runners often stick around to drink and socialize after. Because of course!
Find them:
Runaways Run Club | www.runawaysrunclub.com

Rounding up runners since 1979, the Maine Track Club is based in Portland and has 500+ members throughout the state. Groups runs take place regularly in Portland, South Portland, Cape Elizabeth, Gorham, Sabbatus, Scarborough, and Yarmouth and the club organizes several annual races, training clinics, and club social events as well. All ages and abilities as welcome! Membership is $25 for the year for an individual, $17 for students, and $65 for a family (3-year membership).
Find them:
Facebook page | Facebook member group | mainetrackclub.com

Join up with the Sabattus Rec Running Club for free group runs every Wednesday at 6 p.m. (They’ve been running every week for the past 7 years)! Meet in the Sabattus mini-mall parking lot, next to Dunkin’ Donuts. There are usually two or three groups of different paces/distances, and runs last for about 30-45 min. All ages and abilities are welcome.
Find them:
Facebook group

The name kinda speaks for itself. This new group meets 7:30-8:30 a.m. on Sundays through September at the Eastern Trail in Scarborough (at the Pine Point parking lot/entrance). Run, walk, or run-walk 2.5-5 miles. Open all and ad free.
Find them:
Facebook

This club has been around since 1975. The Central Maine Striders is a membership club – cost is only $15 for the year – and membership includes group runs as well as reduced registration at club races, like the Quarry Road Summer Race series on Tuesday nights. The club will also be bringing back their weekly pub run in the warmer months, where runners meet for a group run in downtown Waterville and then head into a local pub after.
Find them:
Facebook page | Facebook group | www.centralmainestriders.com

Train Your Inner Athlete offers group workouts at the Westbrook Community Center during the week. On the weekends, there’s also a free group run, open to all levels, at 7:30 a.m. Saturdays. Meets behind The Daily Grind.
Find them:
Facebook page