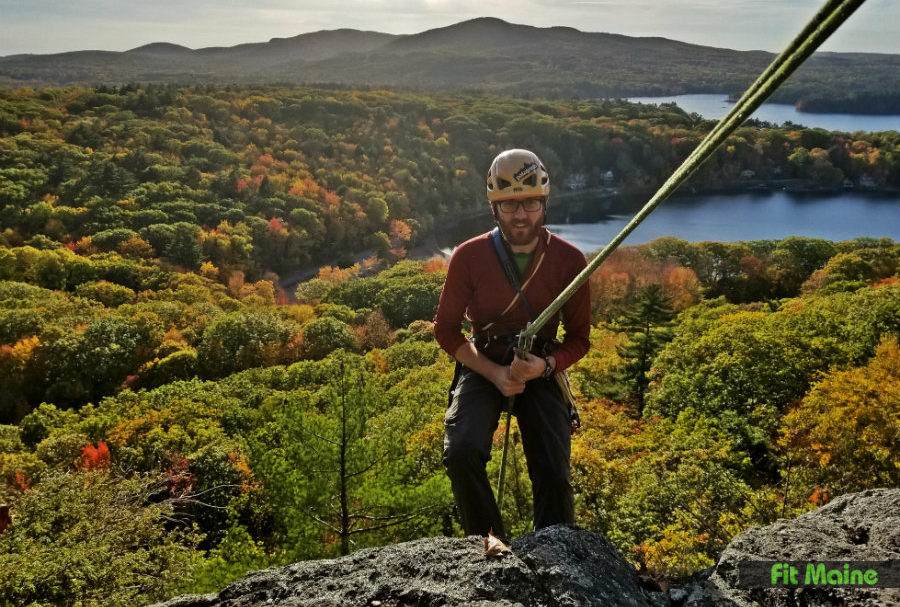 “Trust your feet,” Noah called out from above.

If I’d looked up, I’d see his helmeted head peeking out over a rock ledge, his hands on a long lime green rope that fed through a belay device at his waist. The other end of that rope was attached me, and I was clinging to a rock face, 70 or so feet off the ground and nervous as all get-out.

I couldn’t look up. Or move. My legs shook under me (and I don’t mean some slight little tremor, I mean SHOOK. Wildly, as though they were possessed. It would have been comical if I wasn’t seriously contemplating the reality that I might end up living the rest of my days clutching this spot on the rock).

“Trust your feet,” Noah said in his easy-going way. “You’ve got this.”

MY FIRST TIME: Rock climbing. Watch this video of Mike Hitz of Portland, who tries rock climbing for the first time with guide Noah Kleiner of Equinox Guiding Service. (Spoiler: Mike has an awesome time.)

Trusting my feet meant ignoring my natural tendency to trip, slip and stumble. It meant trusting my climbing shoes, which are made specifically for the sport and feature a sticky rubber sole that sticks to the rock with impressive tenacity. It meant trusting that Noah knew his stuff (he does) and that if he thought I could climb this rock, then, well, he was probably right.

“Are you breathing?” Noah asked. It was a question he asked a few times already – a reminder to breathe, clam down, relax. (He also asked, “Are you smiling?” It’s both a reminder that you’re here doing something that’s really thrilling and fun, and also, something happens physiologically when you smile. Your body follows suit and you chill out a bit.)

I took a deep breathe and let it out slowly. Then I placed my foot on what seemed like the smallest rocky nub, shifted my weight and stood up on it. My hand padded around the rock, seeking something to grab. My fingers cinched on a hold. I placed my other foot and stood again. And just like that, I made my way up.

And that’s when I finally got to look around see and see the view:

While nerves are sometimes hard to control, I had every reason to be confident. I was in the good hands of guide Noah Kleiner, owner of Equinox Guiding Service, based in Camden.

Noah leads climbs year-round for climbers of all levels, although most tend to be novices looking to challenge themselves and try something adventurous and new. With Camden as Kleiner’s base camp, he sees plenty of out-of-town visitors in the summer and fall, but he also digs the idea of making outdoor climbing more accessible for locals – including folks from the greater Portland area who can easily drive up for a day of climbing in the stunning Camden hills.

I met Noah for our afternoon of climbing on the side of Route 52 in Camden (a few minutes drive from downtown). There’s a large pull-off there, just across the road from Megunticook Lake. Noah outfitted me with climbing shoes, helmet and harness, but we needed to hike in a bit first before putting on our gear.

It’s a short hike in to several climbing options at Barrett’s Cove Cliff, a gorgeous piece of rock framed in trees and visible from Route 52. We started with a route called Floral Morals. But first, we needed to slip into harnesses, make sure our helmets were properly secured and put on our climbing shoes. And Noah climbed up the route to set up the belay rope for me.

Noah showed me the figure 8 knot, which keeps the rope secure after it’s fed through the harness. He showed me how the belay device works and how the rope feeds through carabiners at the top of the climb. There are always redundant safety measures in place, too.

Then it was time to start climbing. After watching Noah climb up to set the rope, it didn’t look that difficult. Just start climbing, right? But actually being confronted with the rock is a whole different story. Noah offered pointers on where to reach or place my feet, and how to use my hands to push myself up or use my back to lean against the rock.

And all the while he shouted out words of encouragement, too. “You’re doing great. Nice work. You got this.”

That first climb felt fantastic. I have a bit of a history with heights and ledges, one that includes a panic attack on the Beehive Trail in Acadia and a discomfort that hits like bricks as soon as my brain recognizes that my body is more than 10 feet off the ground at the climbing gym. So this climb was a confidence builder. I felt kind of awesome.

So when Noah suggested climbing Charlotte’s Crack, a two-pitch climb that would have Noah lead climbing and me belaying him from the ground, I thought, “Sure! Climbing rules! I can totally do this. Probably!”

Unlike the Floral Morals route, which was a top-rope climb, Noah ascended Charlotte’s Crack and placed spring-loaded camming devices (or “cams”) into the rock along the way, and then he clipped into those. The cams protect a climber in the case of a fall, so he or she will only fall as far as the last cam placed.

I belayed from below, after Noah showed me how to keep my hands on the rope and feed it through the belay device as he climbed.

Once Noah was anchored on the ridge above, it was time for me to follow. Along the way, I needed to remove those cams (it’s a perk to those devices – they make climbing safer but can also be places and removed without damaging the rock). Sounds like no big deal, until you’re nerves kick in and your basic level of function plummets to “only able to hug rock face for comfort.”

But foot by foot, I climbed up that first pitch, removing cams and clipping them to my harness loops, where they jingled together with a real-rock-climber sound that made me feel rad. (Those feelings were tempered by moments of fear, when my legs shook and the rest of me froze in place. I called up to Noah, “I’m really scared. I’m breaking down over here.” And I  WAS scared. But I also had this ginormous grin on my face.)

After that successful first pitch, we repeated the effort for pitch two, climbing higher than I’d thought I was capable of.

Once anchored at the top and my heart rate starting to slow down from its accelerated rate, I took a minute to look around. The view here is breathtaking, with Megunticook Lake to one side and Ragged Mountain to the other. I looked down to where we’d started and marveled. I climbed that. Holy wow. I actually climbed that.

After drinking in the accomplishment and gawking at the blue skies and foliage and cars passing below on Route 52, it was time to rappel down and bring this adventure to a close.

By the time my feet touched the ground, I’d almost completely forgotten about those moments of panic, where I wondered what I’d gotten myself into. Instead, I was flooded with pride and accomplishment and badassery. I realized I’d banged my knees on the rock and saw the darkening bruises as badges of beginner climbing honor. And my grin? It was enormous.

Whether you’ve done some climbing before or your entirely new to it, a guided climb with Equinox Guiding Service will build your confidence and maybe even get you to challenge yourself more than you thought possible. And Noah’s easy-going approach goes a long way to calm nerves. So does the occasional reminder to breathe and smile.