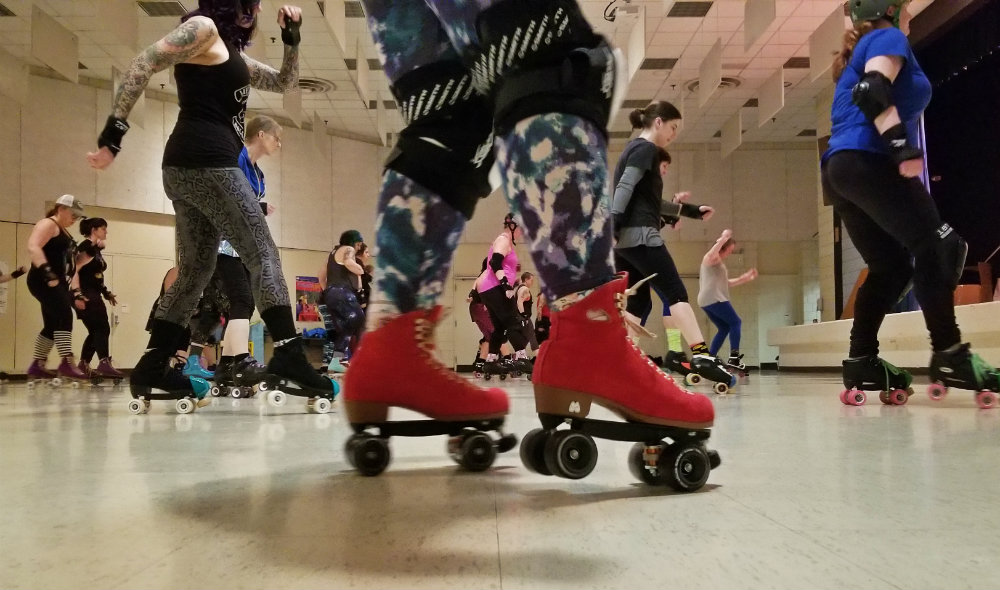 If your mind immediately flashed back to Skate Nights circa 1987 and smooth skate dancers strutting it up at center rink – then yes, that’s exactly what we’re talking about.

Dance Skate Club just launched in January. And it’s clear I’m not the only person who heard about it and thought ARE YOU KIDDING HOLY SKATES YES HECK YES! The next session of beginner and intermediate classes has already sold out.

But don’t get down if you didn’t get in this time around. There are future sessions to look forward to (follow the Facebook page for updates). So ready your skates (or acquire some skates if you don’t own any) and maybe pick out a rad pair of pants that you can boogie in.

If it’s been awhile since you’ve been on skates and you’d like to shake off the dust, look out for future Safety Dance Clinics, two-hour clinics where you’ll practice standing, rolling, stopping, and stepping on skates, and you’ll learn how to fall safely, too.

Truth is, the idea for Dance Skate Club was rolling around in Lisa’s mind for a few years. But being busy with Derby Skate Club – and knowing how much planning and learning would need to go into launching a rollerdance class – the idea kept getting pushed to “some day.

But as skater’s fate would have it, the rollerdance idea was expedited by the unfortunate and unexpected closing of Happy Wheels Skate Center in Portland this past December.

Derby Skate Club classes were held there (the rink was also home to Maine Roller Derby and Studio Fit Zumba classes), and skaters were left scrambling for a new space.

The hunt for space continues (so if you know anyone with 5,000 square feet of unobstructed space with a skataeble floor, definitely get in touch), but that unexpected closing opened the door for Dance Skate Club.

Dancing on skates requires a lot less space than full-on skating does, which meant there were more possible options for venues. Turns out, Lisa already had a great relationship with the people at Riverton Elementary School, where she’d hosted off-skates workouts before. So she reached out, tested her skates on the floor of the cafeteria, and booked out the first six-week session.

You can guess at what’s happened in the couple of months since then: Dance Skate Club is a hit. No surprise!

At its core, Dance Skate Club is about moving your body. It just so happens that you’ll do it in a really unique and fun way. To join the beginner class, you do need to know how to skate and you do need to own your own skates. You don’t need to be a good dancer. It’s not about nailing each move or being the slickest skater the world has ever seen. As Lisa often says, “If you’re moving, you’re perfect.”

That said, it’s possible you will be an amazing rollerdancer. You’ll definitely have an excellent time.

There’s great energy in this space, too – classes are welcoming and upbeat and, in addition to learning new choreography, you’ll have some time to experiment with new skills like balancing on one skate and gliding across the floor.

There’s no telling where your rollerdance skills might take you. Maybe you’ll be the star at some rink of the future, mesmerizing the masses with your dance skate prowess. Or maybe you’ll keep it low-key, occasionally busting a move mid-skate, impressing your friends and those lucky enough to witness it.

Whatever path you choose, it starts with signing up. But like later, when there’s a new session that has space because the one coming up is full. I mentioned that it’s full, right?

Beginner and intermediate classes held at Riverton Elementary School, 1600 Forest Ave, Portland.
Next session is FULL. So sad!
Check out dskateclub.com and www.facebook.com/DerbySkateClub to stay apprised of upcoming classes.