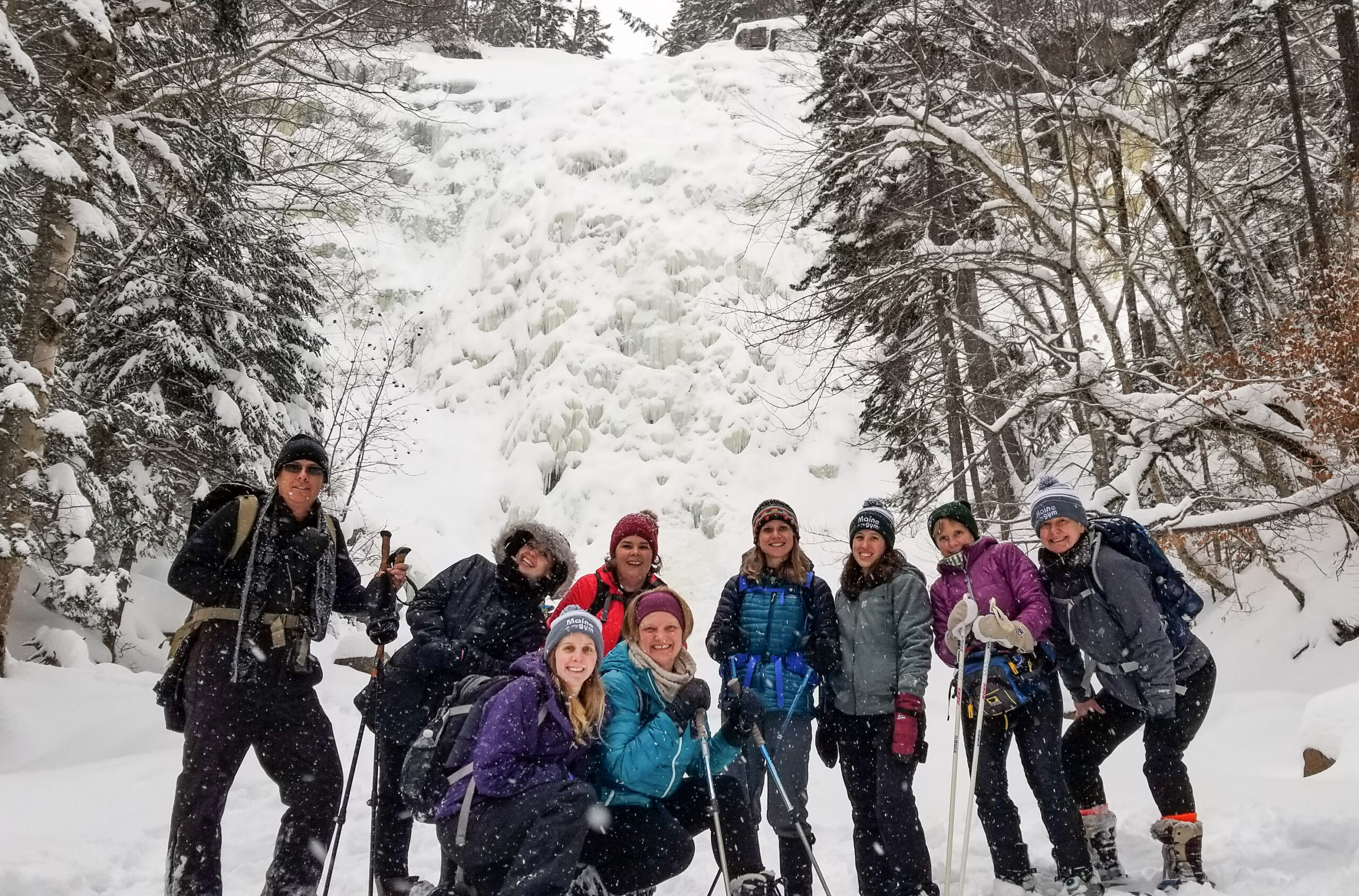 Even when you half know what to expect, emerging from the snow-covered woods to see a 160-foot wall of frozen water standing stoic and grand before you is pretty dang magical. Especially when it’s taken you a wee bit more effort to get there than you planned.

That was our experience snowshoeing to Arethusa Falls in New Hampshire’s Crawford Notch State Park.

Back story: Inspired by a blog post from NH State Parks about seeing 8 waterfalls in a day, I put together a one-day winter adventure for the Fit Maine Social Club. I knew we likely wouldn’t have time to see them all (shorter winter days and snow-covered terrain) but what can I say, I’m a waterfall optimist.

We arrived at the trailhead the morning after a pretty significant snowfall. While the road to the upper parking lot was plowed, it proved a challenge for some cars to get up in the slippery snow. Some folks left their cars in the lower lot and walked up. We weren’t the only hikers excited to get on the trail. There were several groups, including many ice climbers, who were headed to Frankenstein Cliffs and Arethusa Falls.

Hikers in snowshoes had beaten us to the trail and had packed down the snow some, but snowshoes were still in order. So off on the 1.5-mile trail we went, following the snowshoe tracks of our fellow waterfall hunters.

The trail was beautiful. And we plodded along, marveling at the scenery and the powder-covered trees.

Not far in, we came to the intersection with the Bemis Trail side trail. This short detour, marked with yellow blazes, is often skipped by folks on their way to see Arethusa Falls, but there are two small falls on Bemis Brook (so I learned from the ‘8 waterfalls in a day’ post), and we were on a waterfall hunt after all, so we took the short detour.

And it was pretty, no doubt about, as it followed alongside Bemis Brook. We were the first to trek this way since the new snow, which meant Kelly and Dave, who were up front, got to break trail.

The two small falls (Coliseum Falls and Bemis Falls) are marked with signs, which is how we found them, but thanks to all that snow they were near impossible to see, buried under so much fluff.

That wasn’t any big deal. Everything we could see was still so marvelous. But that Bemis Trail gets pretty steep just after Bemis Falls, which, in the summer probably isn’t a big deal. You just climb up the rock staircase and get on your way. But with a boat-load of fresh snow? That added some challenge.

Our crew wasn’t deterred, despite all the sliding around. Some stuck with their snowshoes to navigate the snow, others switched to microspikes. It was a bear to get up, but these hikers took it in stride and climbed up, helping each other the whole way. Eventually were were all on top, catching our breath and looking at each other like “Well that was a challenge.”

Here’s where I’d like to give a nod to these stellar hiking buddies, who kept a good humor, even as we panted and crawled our way up. Other hikers who’ve written about this trail in winter didn’t seem to have the same problem, but that’s winter hiking for you. If you end up here after a fresh snow dump, maybe skip the Bemis Trail. Or at least be prepared to possibly scramble and slide.

The Bemis Trail reconnects with the Arethusa Trail at the top of that steep bit, so on we continued, plodding up and down the rolling hills of the trail (which in summer are likely no big deal, but definitely helped us work up a snowshoe sweat).

We took time for photo opps on the bridges, too.

And finally, the trees began to part, and there she was. Big and beautiful Arethusa Falls.

++ In Greek mythology, “Arethusa” was a nymph who tried to escape the river god Alpheus, who had fallen in love with her and wouldn’t leave her alone. The god Artemis tried to hide Arethusa in a cloud, but she was so scared she began to sweat profusely, and she was turned into a stream. (Kinda wish someone told Alpheus to take a hint and back the heck off.)

There were several other hikers loitering there as well, and a couple of ice climbers who were prepping their gear.

You could hear the trickle of running water under the thick layers of ice, but the falls were frozen all the way across, like some massive winter curtain that had closed on the rock face.

After some snacks and photos, back we went on the Arethusa Trail.

We skipped the Bemis Trail on the return trip. No one was sad about that.

All in, it took us about 3.5 hours to hike to the falls and back, including hanging out at the falls for a little bit.

It’s an excellent hike – but definitely took longer than I’d expected, thanks to the Bemis Trail detour. We’d planned on hitting a few more waterfalls after this one, but then decided we were hungry and ready to be in a warm pub with hot soup and hot toddies at our disposal. (We did pull over on 302 to see Flume Cascade, which wasn’t accessible due to all the plowed snow, so our whole waterfall extravaganza went from “Let’s aim for 7!” to “You know, Arethusa Falls is worth it on it’s own.”

So there you go.

Trail head off 302 in Hart’s Location, Crawford Notch, NH. (The big signs were down, making it slightly harder to find, but you can see the Arethusa Falls Road street sign). Pull up the hill, if you car can make it, and park at the top where the trailhead is. Directions.
Trail is 1.5 miles one way and begins just off the top of the parking lot. Follow the blue blazes.
More info via alltrails.com