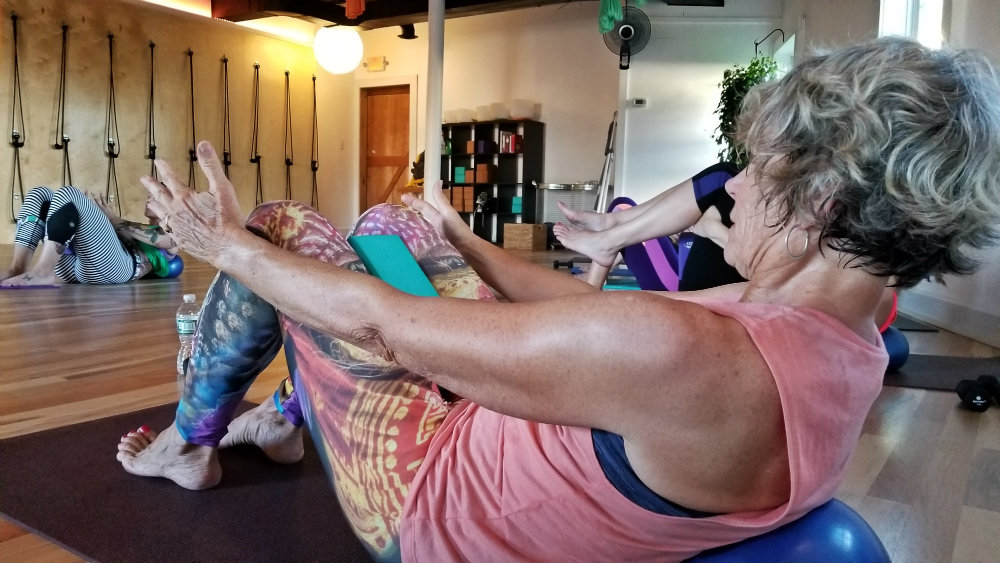 Friday night! Time to hit the town and party down!

Maybe there was a time when my typical Friday night was a little more wild. There must have been – I seem to have hazy memories of the Liquid Blue dance floor and deep conversations while waiting in line for the bathroom at Brian Boru. But these days, I keep the same hours as most grandparents: asleep by 9:30 p.m., up before the sun. And I like it like that.

But it won’t surprise you to hear that I also like 1. Doing active stuff and 2. Drinking after the active thing. From what I gather, a lot of you like doing those things, too.

So the Spin + Barre + Wine class at Tula Studios in South Portland is right up my alley. It’s a Friday evening opportunity to do some good for your body, socialize over a glass of wine, and still be home watching Dateline at a reasonable hour. (Or, you know, doing whatever you like to do on a Friday night.)

The Spin + Barre + Wine class happens once a month (on the second Friday of the month) at 5:30 p.m. Instructor Shannon Ireland leads a 25-minute spin class followed by a 25-minute Barre class. Afterward, everyone’s invited to stick around for wine, and perhaps some cheese, crackers, and fresh fruit, too.

It’s an alternative to the wild Friday night for folks who still appreciate being out and about, hanging with friends, or meeting new people…while wearing yoga pants and sweating with wonderful abandon. And I should note: While the wine portion of this class is a once-a-month addition, the Spin + Barre class (aka “Build and Burn,” as it’s called on the Tula schedule) takes place every Friday at 5:30 p.m.

Class begins in the spin room. Instructor Shannon says she tries to cram a whole hour-long class into those 25 minutes, which means you will work hard. Shannon will have you up and out of your seat, sprinting, and sweating something serious with every turn of the tension knob. 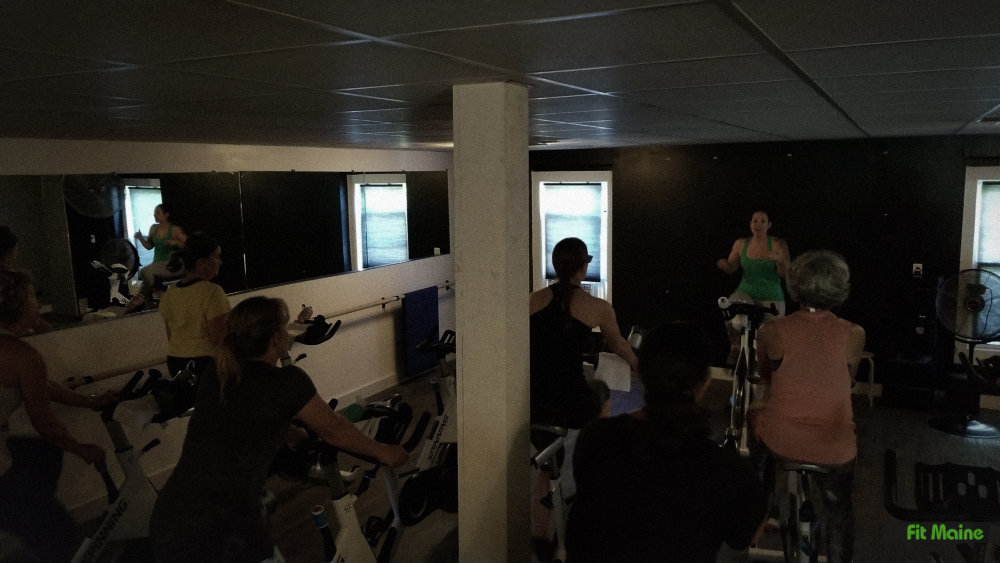 If you’re brand-new to spin, that’s a-okay. You’ll get help setting up your bike, and spin is pretty easy to modify, whatever your level. (Truth: A few times, when Shannon told us to increase the resistance on our bikes, I didn’t. I was already working my legs off.) Wear cycling shoes if you’d like, or sneakers are just fine, too.

Immediately after spin, class heads over to other room for a 25-minute Barre class. (Yoga and aerials classes are held here as well, hence all the cool stuff hanging from the ceiling and walls.)

Barre is still relatively new to Maine, so if you’ve never tried it before, it includes movements straight out of ballet, yoga, and Pilates, and often incorporates the ballet barre. But you don’t need to be a bendy ballerina for this class.

On the whole, Barre employs small movements with light weights. You might grab a set of 3-pound dumbbells and think “3 pounds? Easy. I got this.” And then 5 minutes into class realize those 3 pounds are pretty damn heavy. Those small, pulsing movements burn in pretty short order.

During our recent Spin + Barre + Wine class, Shannon led us through exercises focused mostly on arms and core (we did, after all, just give our legs a run for their money). More than once I needed to drop into child’s pose to take a breather – Barre is deceptively tough. Not that it isn’t beginner friendly (it is), but at first glance, Barre looks gentler that it really is. It’s sneaky that way. 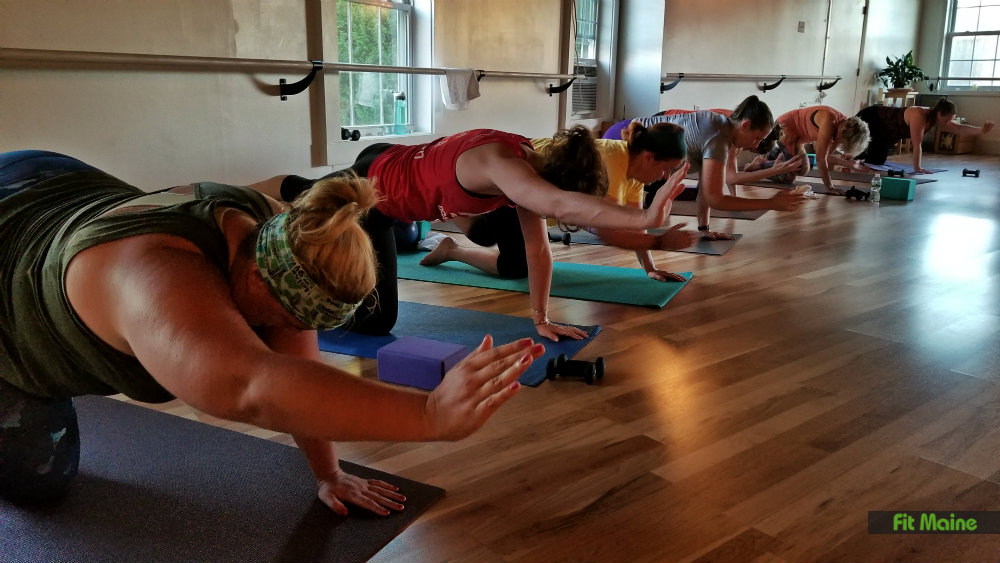 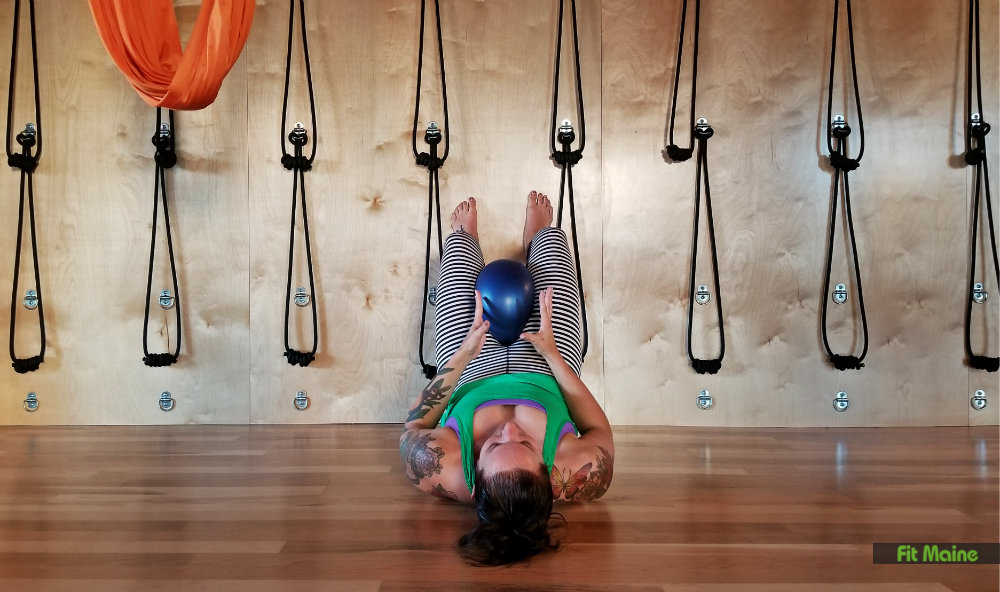 After 50 minutes of Spin and Barre – when you’re clothes are soaked in sweat and you’re sure you don’t want to lift that 3-pound dumbbell even one more time – it’s time to move on to the final stage of Spin + Barre + Wine. The wine stage!

No need to primp for this social hour. It’s a come-as-you-are, barefoot, sweaty, red-faced, gym clothes time to relax and chat.

Last Friday there was a sweet little spread of cheese, crackers, and fruit, and we all poured ourselves a glass of wine and hung out talking for an hour. I like that this class is a once-a-month excuse to socialize and get to know your fellow active people (rather than bolting out the door like we usually do after class).

Spin + Barre + Wine takes place once a month, but the Spin + Barre classes (called “Build and Burn”) happen every Friday at 5:30 p.m. So if wine isn’t your thing, or if you like wine but also like the idea of a Spin and Barre combo class, check this one out.