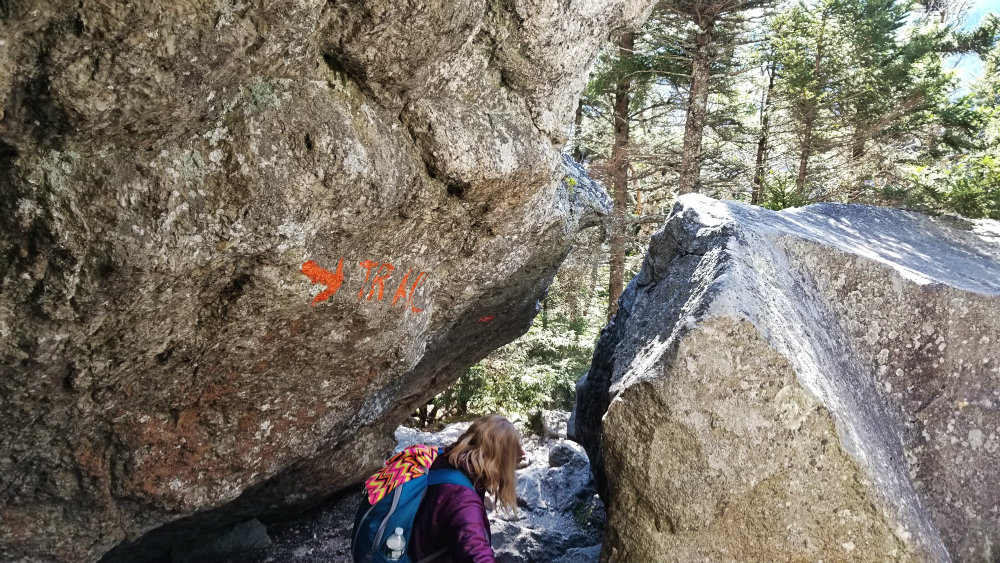 SO MANY GINORMOUS ROCKS. And a view you’ll think is top notch. (Because it IS a notch. And a nice one!)

There are two trails to Table Rock – a vista point on Bald Pate Mountain – from the parking lot on Route 26. The white blaze trail (which turns to blue when it separates from the AT, about halfway to Table Rock) is the easier going of the two. But the orange blaze trail, with its piles of massive boulders and explorable nooks and crannies, is a whole lot of fun.

Make it a loop by going up the steeper orange blaze trail and down the blue/white trail (your knees will thank you). And definitely give yourself extra time on the hike up to loiter with the rocks. (My friend Danielle and I can’t be the only hikers who are suckers for a good “ahhhh, a monster is pulling me into this small cave” photo, right?)

Our visit to Table Rock was in early November, after the fall leaves had completely shed from the trees, and we remarked how stunning this hike must have been just a few weeks earlier. Even still, the terrain here makes this hike a memorable one, whatever the trees are doing, and the conifers do a fine job keeping things green and shaded as you climb.

The orange trail gains 900 feet in elevation in the span of 0.8 miles – a not insignificant gain that translates into some steep going along the way. But things start slowly from the parking lot, which is located across the street from Baldpate Mountain.

We crossed the street and followed the trail for maybe 0.1 of a mile before getting to where the two trails diverge. Orange trail on the right, white AT trail on the left. We went right.

It was all brown leaves, dirt, and darting chipmunks at first – and the occasional glacial erratic. After not too long, though, the stones became increasingly prevalent. There were stone steps, place by human hands, and then rhinoceros-sized rocks sitting where the passing glacier dropped them oh so long ago.

At spots along the trail, the rocks are piled just so to create small hollows, just big enough for the bottom half of an average adult. So of course we climbed inside every one.

As we goofed off, a few other hikers passed, including a couple familiar with the trail who said, in a nutshell, “If you like those tiny caves, wait until you see the one up ahead.” Our curiosity piqued, we continued on, stopping to take in the view at a scenic lookout.

And then we came upon the impressive glacial rubble the other hikers had told us about. Boulders the sizes of cars, buses, tiny houses leaned against each other like overtired children. They looked like they might tumble at any moment, but also like they’d hold fast forever. We poked around the pile, scrambling over and crouching under, repeatedly saying to each other, “This is so cool!” 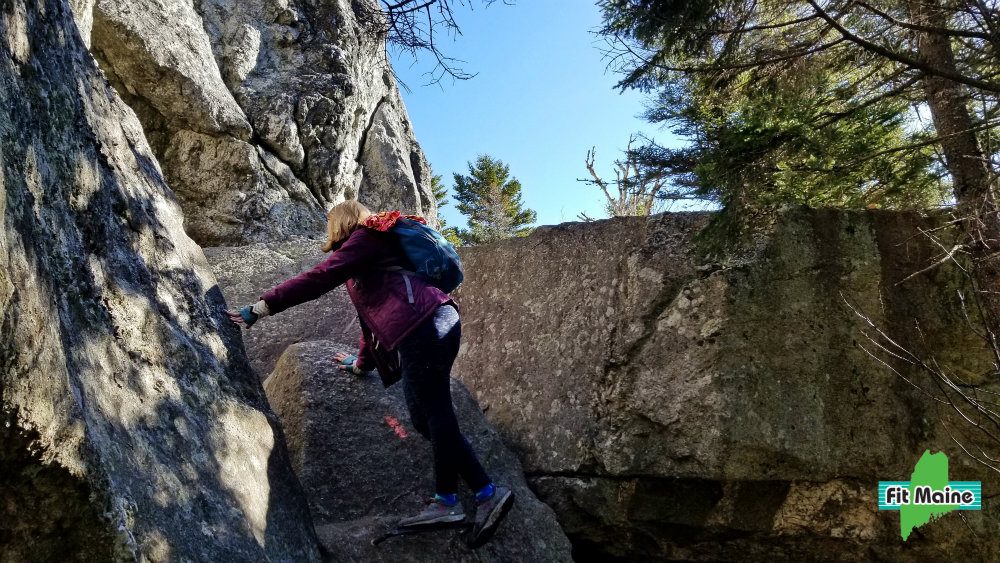 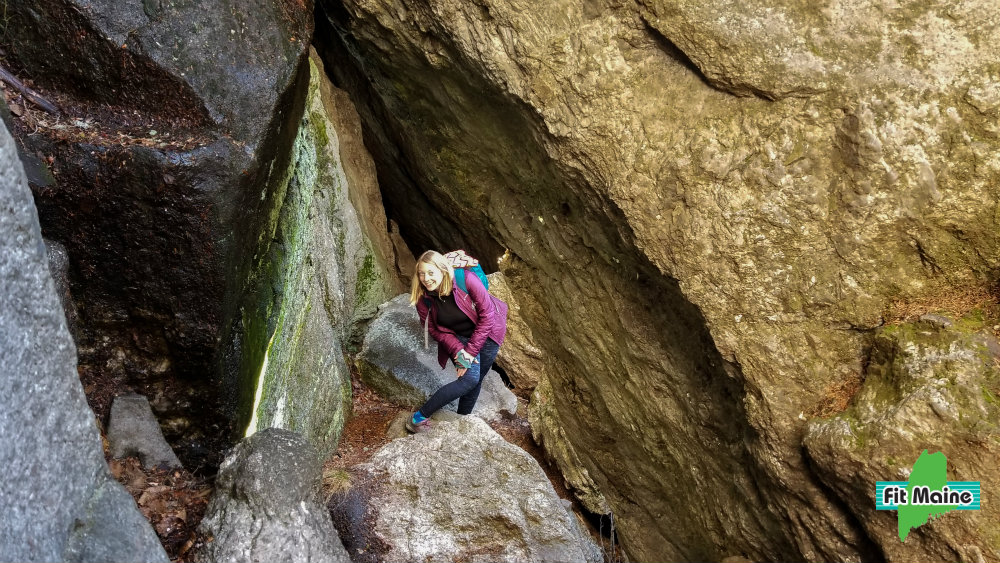 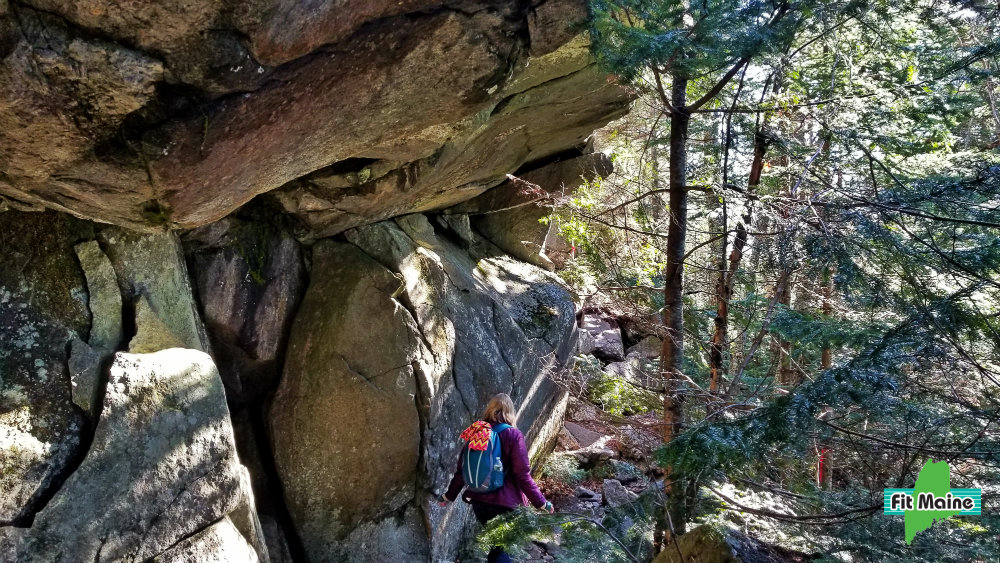 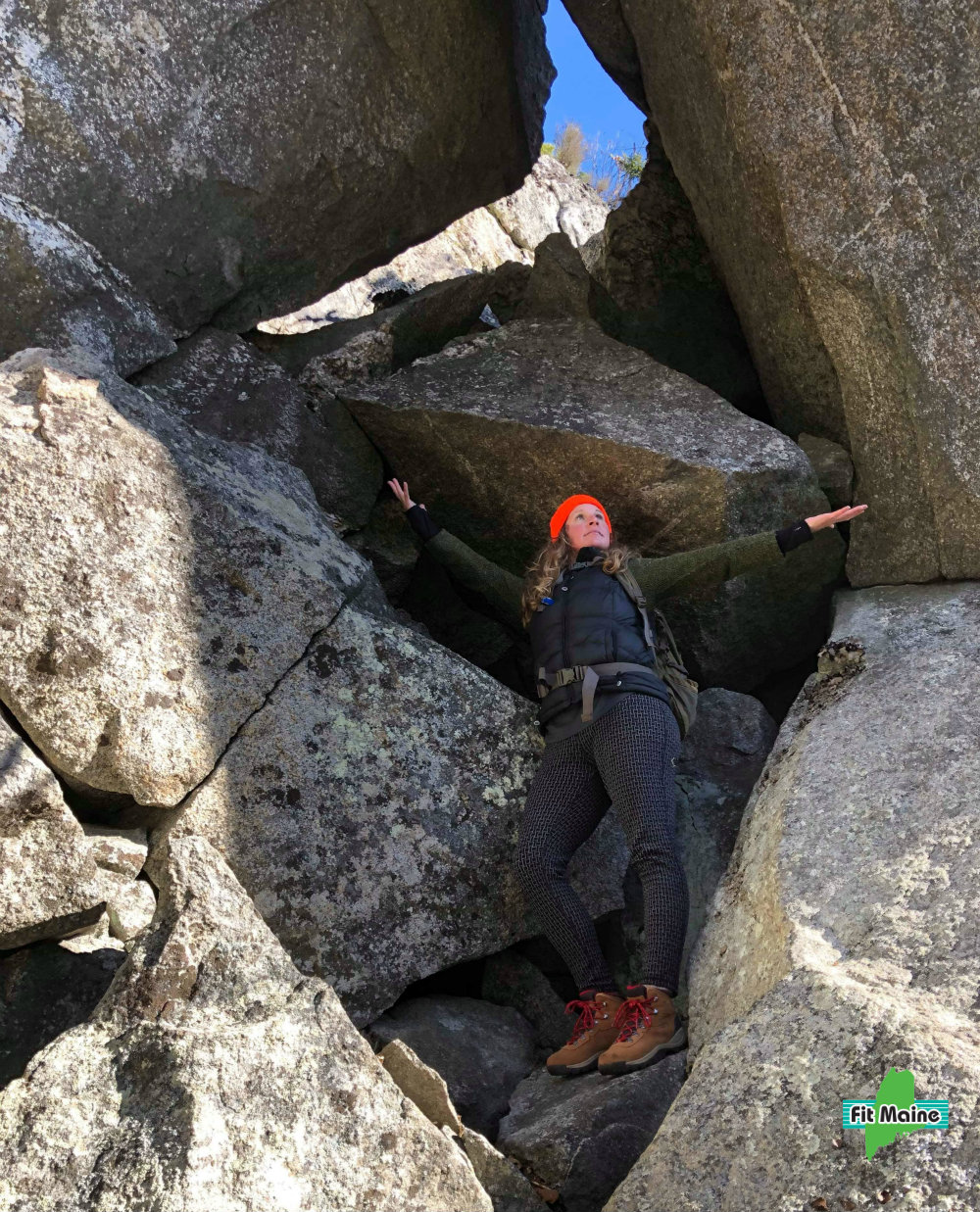 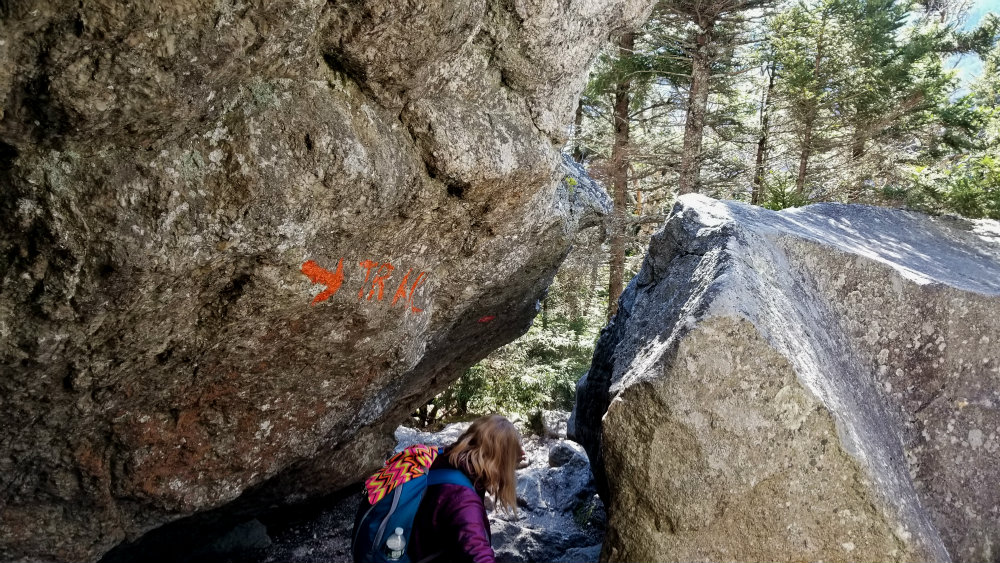 Eventually we tore ourselves away and continued up to Table Rock.

This vista is 900 feet above the trail head and offers excellent views of Old Speck Mountain and Grafton Notch. It’s also a place where you could walk right off the edge and plummet a pretty good distance – so don’t do that. In summer weather, I’d like to eat a sandwich while sitting there in the sun. On this November day, though, the wind was fierce and brisk, so we opted to tuck back into the trees eat our sandwiches there.

We met several groups of hikers on the trail and while hanging out at Table Rock. One duo who passed us going up the orange blaze trail said they saw a black bear (which they told other hikers who then told us). We saw a few dogs, but nothing bigger or growlier.

To complete our loop, we took the blue blaze trail down. It’s a little bit longer ( and easier going, but still includes some neat features, like this ladder:

The blue blaze trail connects to the Appalachian Trail and the blazes become white for the rest of the way down to the parking lot. We found the trail to be easy to follow, except at the junction were the trail connects with the AT. We at first thought we needed to cross the stream there, but soon realized we needed to bear left to follow the trail back to the parking lot. Otherwise, the trail was easy to follow, despite the ground being covered in fall leaves and tree debris from falls storms.

For hikers looking to add some milage, this trip can be extended to 7+ miles by continuing on to Baldpate Mountain.

Or, do like we did, and turn the day into a Table Rock tour and head to Table Rock in Dixville Notch. It’s a 40-minute drive on Route 26 and a short-but-steep hike to the Table Rock precipice (we took the 57 Table Rock Trail up – there are three trail options), which is stunning and scary and downright awesome.

Grafton Notch State Park
Parking lot is on Route 26.
From the intersection of US Route 2 and ME Route 26 in Newry, follow Route 26 approximately 12 miles north to where the Appalachian Trail crosses the road. Coming from Route 2, the trailhead and parking area will be on the left.
Trailhead is across the street.
Loop is 1.8 miles, just under 900 feet elevation gain.
> Driving directions
> Trail Map [pdf]
> Read more about it on alltrails.com