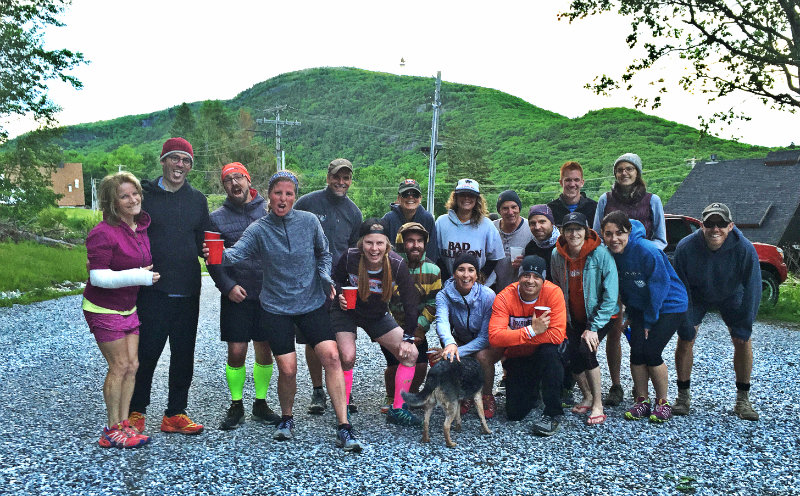 When I first heard about the Trail Runners of Midcoast Maine, I wanted to join them. From what I could see on their Facebook page, they were having a load of fun out on the trails. And I wanted to be a part of it. The thing is: I have severe running self doubt.

So before I went, I posted in the group page and messaged the group’s self-described “instigator,” Emily Higgins McDevitt, and said things like, “I’m really slow. I’ll bring up the rear. I don’t mind being left in the dust,” to make sure that there’d be absolutely no expectation that I’d be able to run for more than five minutes at a time without needing a walk break. (Even if I did show up in a shirt that says, “Maine is my gym,” and even if I run a website called FitMaine.com, and even if I’m always telling people to get out there and try new things that are sometimes scary and daunting.)

Emily’s response? “No worries! I always run/walk/crawl/sweep! And then we can talk talk talk too!…I’d love to show you around and introduce you to it all!”

And introduce me she did!

Emily started the Monday Night Dirt weekly group run in 2015, hoping to get local runners together for some trail camaraderie. She also came up with the Trail Runners of Midcoast Maine (TRoMM) name and logo, which features a lynx sprinting towards its prey (or maybe a bowl of tater tots) because a lynx is excellent running inspiration.

She picked Monday nights because it was the same night the Midcoast chapter of the New England Biking Association meets for rides at Camden Snow Bowl. No, the runners and bikers aren’t on the same trails competing for space (that’d be interesting, though), but it does make for a lively parking lot. TRoMM’s first week, four runners showed up.

Fast forward 11 or so months to the summer of 2016, and I arrived to a group of 20 runners, many sporting TRoMM shirts and trucker’s caps, chatting together before the evening Monday Night Dirt run. As soon as I walked up, I was met with greetings and smiles and handshakes. Emily met me with a hug. Immediate welcome.

As for the run? Yea, I brought up the rear. But Emily ran and walked with me the whole time, chatting me up the entire way (I’m usually the chatterbox, I said, when I’m not gasping for breath). TRoMMer Beth was with us, too, along with a couple of other runners who ran ahead but waited for us at points where the trail split.

The run starts up a nice incline. “Get through the first minute or so, then it levels out a bit,” someone said. Suuuuuuure.

There were hills. Small ones, steep ones, long ones. I walked up many of them. But there were lolling parts, too, where I could feel my speed pick up a bit as my feet dodged roots and rocks (and sometimes stumbled). We ran and talked and joked and walked. We marveled at how cool it is to be in the woods on a Monday evening, or how the sun coming through the trees looks so damn pretty. And I challenged myself to keep up, keep running, tackle that next hill, despite the fact that my legs were tired or that I felt so out of breath at times.

I couldn’t believe it. Maybe it was because I was paying so much attention to not tripping on things, or maybe it was Emily’s talent for distracting me with questions when the terrain was getting tough, or maybe it’s just the nature of being outside…but I was shocked. Four miles (five, actually, when all was said and done) is a lot for me.
And when we finally came out of the trees onto the wide, open trail (remember that steep incline? It’s way better on the way down), I had a smile on my sweaty, really red face.

It’s funny. All that time I was jogging along, telling Emily how I wanted to be a trail runner, but I’m slow and it’s hard and blah blah blah, I WAS TRAIL RUNNING.

So I guess that means I’m not an aspiring trail runner. I am one. (And I’m not even going to insert a self-deprecating joke here about being a trail jog/walker.)

High-fives were passed around back in the parking lot, along with some homemade cookies (hallelujah!). I told Emily that I was going to keep running the trails closer to home this summer, and that I’d be back in a few months to show off my progress. But even if my speed or agility don’t improve a lick, I know I’ll be welcomed back any time.

Monday Night Dirt happens every Monday night at 6 p.m. Meet in the parking lot at Camden Snow Bowl (the lot near the toboggan chute). It’s free and yes, open to all levels. Emily will make sure you’re well taken care of, whatever your level. TRoMM also meets for regular runs on Wednesday mornings and sporadic groups runs, which are posted in the Facebook group.