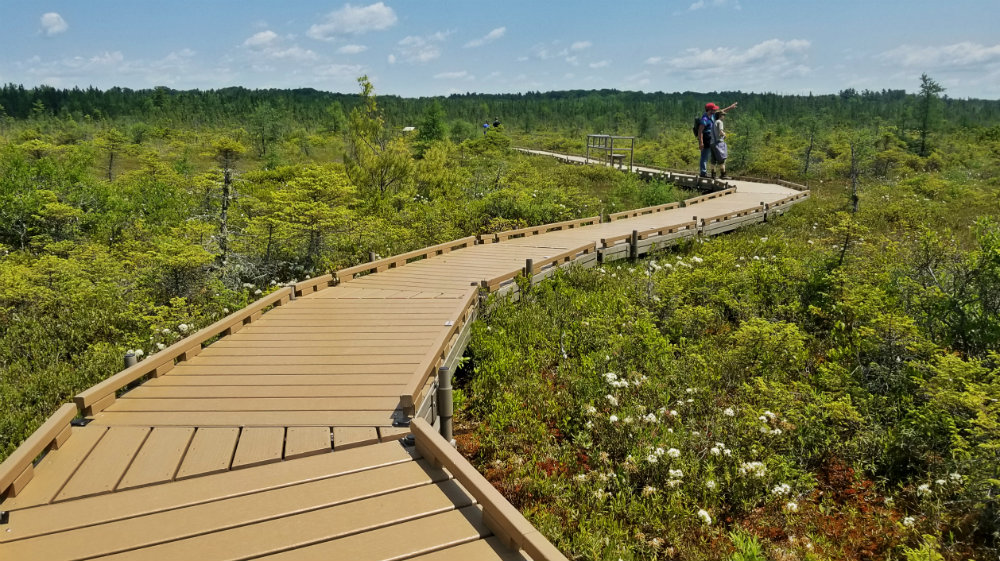 Bogs are champions of long-term storage. Formed over hundreds or thousands of years, bogs are masters at trapping carbon, hoarding dead plants, and hanging on to the occasional three-thousand-year-old body.

They’re extraordinary ecosystems, too, but since bogs aren’t in the habit of bragging, their talents generally go uncelebrated. As a result, the average person’s bog knowledge is limited to the hilariously gaseous and terrifyingly smelly Bog of Eternal Stench from 80s movie classic The Labyrinth.

That bog is an entertaining interpretation, but doesn’t come close to capturing a bog’s particular uniqueness. (That bog is actually more swamp-like than bog-like (more on the differences between bogs and swamps and marshes and fens. And apparently worms don’t talk in real life either. Dang.)

An in-person visit is a fine way to begin learning more. Here in Maine, bog curiosity is easily piqued with a visit to the Orono Bog Boardwalk in Orono.

Situated on the edge of the Bangor City Forest, the Orono Bog features a one-mile boardwalk loop trail that begins in forest and then strikes out over the peatland, the vegetation transitioning from overhead tree cover to ground-level mosses. It’s super pretty, for starters, and the boardwalk itself is a bit of a marvel.

The idea for the boardwalk was first prompted in 2000 by Professor Ronald B. Davis, from Orono, and the University of Maine. Construction began in 2002, and it opened to the public in 2003. The boardwalk is constructed of 509 sections that are 8 feet long and 4 feet wide, and includes crafty connector bridging at turns. Read more about how it was built.

Not only are the aesthetics impressive, but peat bogs are also a humble, hard-working lot. They cover a small fraction of the Earth’s land surface—about 3 percent—and are masters at keeping carbon on lockdown. They’re comprised of partially decayed vegetation such as grasses and trees that keeled over thousands of years ago but didn’t quite turn into dust on account of rising water or already saturated soil. That partially decayed material builds up over time, creating that thick and incredibly flammable layer of peat.

While their decomposition speed is lackluster, peat bogs overachieve in carbon capture. They store more carbon than double what the planet’s forests manage, making them vital to combating climate change. Read more about the badassery of raised peat bogs.

Throughout history, humans have interacted with bogs in interesting ways. Case in point: bog butter.

In 2016 a man found a 22-pound chunk of butter estimated to be more than 2,000 years old in an Irish bog. Turns out, finding ancient butter in Irish bogs is not all that uncommon.

Then there are the 2,000-to-3,000-year-old “bog bodies” that have been discovered in raised peat bogs in Northern Europe. And by bodies they mean people.

The bodies are remarkably well preserved. That’s because raised peat bogs are low in oxygen, and oxygen happens to be a favorite dish for most decomposing microorganisms. Plus raised peat bogs in Northern Europe are cold. Like refrigerator-big-enough-to-hold-a-lot-of-people cold. Low oxygen and low temperatures means there’s a high probability that any body you put in raised peat bog will still be there in a few thousand years.

Over in Orono, however, we’re not likely to pull barrels of thousand-year-old butter or cadavers from three millennia past out of the bog. But we can find carnivorous plants.

One of them is an insect-eater called a pitcher plant, and it’s pretty prolific at the Orono Bog. Nestled into the peat moss are pitfall traps made of specialized leaves that are filled with nectar to lure in prey, which usually consists of insects, spiders, and mites.

My photo doesn’t quite do them justice:

The below photo from the Orono Bog Boardwalk Facebook page, is much better. Read more info about the carnivorous plants in the bog.

But lest ye start thinking the bogs are no-good places filled with butter and bodies and tricky trapping plants, it should also be noted that they’re totally underappreciated and important ecosystems.

“They are one of the harshest environments on the planet and also one of the most important in terms of carbon storage. New research hopes to reveal the role these threatened bogs could play in the climate change story.” Read more in this story from The Guardian: Ultimate bogs: how saving peatlands could help save the planet.

Thanks to the University of Maine, the City of Bangor, and the Orono Land Trust – as well as all the volunteers who work to maintain the boardwalk – for creating an accessible place for us to expand our bog knowledge.

Open May-October
++ 2020 UPDATE: The Orono Bog Boardwalk remains closed. See the Facebook page for up-to-date info.++
Free admission, donations appreciated
One-mile loop trail.
The boardwalk is wheelchair friendly and there are benches along the way for visitors to sit and rest. It’s free and open to the public from May to October (opening day varies). You can even follow the Orono Bog on Facebook to stay apprised of activities there and what’s blooming as the seasons change).
No dogs
FMI: umaine.edu/oronobogwalk and www.facebook.com/OronoBogBoardwalk/