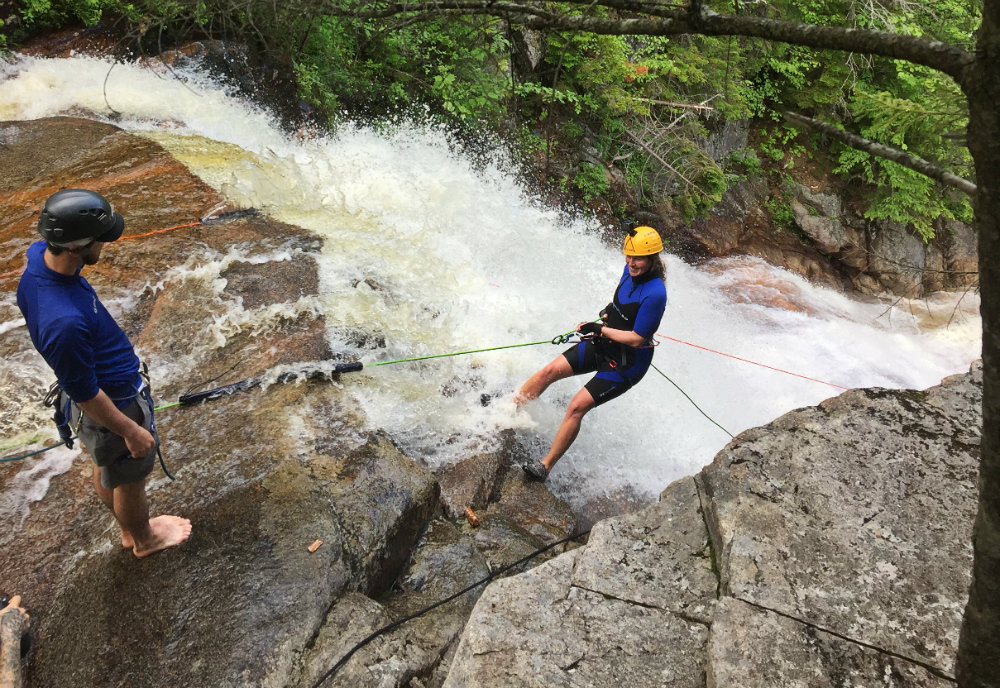 Instead, the river of rushing water appears to drop into nothingness, disappearing magically over this end-of-the-world ledge in front of you. You could almost believe that was the case, were in not for the immense and ever-present sound of that water tumbling down the 100-foot rock face below.

And anyway, you already know where that water is going. It’s the same place you’re going, because you came here to rappel down this waterfall.

The waterfall rappel is one of the adventurous offerings from Northeast Mountaineering, a guiding company based in Bartlett, New Hampshire, that specializes in rock climbing, cliff rappelling, hiking, mountaineering, ice climbing, and backcountry skiing.

And, of course, waterfall rappelling.

Two summers ago, I had the extreme pleasure to rappel down Ripley Falls with Northeast Mountaineering for a TV segment on 207. Here’s that video:

This probably won’t shock you to hear, but it was awesome and thrilling and kinda scary at first, but mostly it was the kind of adventure that leaves you feeling like a bit of a badass. And if you’d like a little more thrill in your world, you can do it, too.

Before you take that first step backward over the edge of Ripley Falls, you’ll start your morning at Northeast Mountaineering’s Bunkhouse in Bartlett, getting geared up (helmet, harness, wetsuit if you want one – I recommend it) and learning the basics of rappelling. They have a small wall out back where you’ll practice sitting back into the harness, controlling your rope speed, and looking below you to where you’re stepping. (And to calm your nervous heart, you’ll also learn about autoblocks and redundant safety measures that make sure you’re going to be a-okay on that waterfall.)

Then it’s a carpool to the Ripley Falls trailhead and a half-mile hike in to the falls (it’s a short hike, but steep in spots). You’ll hear the waterfall before you see it. And when you see it? It’s wow.

It’s another short-but-steep climb up the trail leading to the top of the falls. And it’s on the top of this trail where the nerves get serious. “I’m going to rappel down a waterfall” is no longer a thing you said you’d do. It’s happening. It’s imminent.

But you’re not going to hurl. Instead, after the guides ready the ropes and you watch your fellow rappellers take those first steps backwards over the edge and then disappear down below, you too will make your way to the edge, maybe even daring to look down at the wall of water cascading down down down.

Those first few steps over the edge, when you lean back into your harness and away from that safe ground you were standing on moments before, are the scariest. You almost don’t recognize how ridiculously cold the water is, except it is ridiculously cold and you do notice. But right now, you’re taking your first down a waterfall and that’s pretty much the the only thing you can focus on.

At the top of the waterfall, the rock face is staggered like a staircase, so you you need to mind your footing. (If you do misstep, as I saw one gent do as he started down, don’t worry, you’re roped in and aren’t going anywhere. He ended up tipping sideways and then righted himself again with a laugh and kept going.)

You can choose to hang to the side of the waterfall or get right into it (that water is coming down at a pretty good clip, which adds pressure onto you as a climber and makes it tough to see where you’re placing your feet, so most climbers hang to the side for their first rappel down).

The rock gets less steep as you near the bottom and your “oh my god, I’m rappelling down a waterfall” confidence is soaring.

Just in time to do it again. (You can rappel up to three times!) You can also rappel once and then hang out to enjoy the gorgeousness of Ripley Falls. Or you can try rappelling further into the waterfall to see what that feels like.

The whole experience takes about 6 hours (including the gearing up and safety stuff back at the bunkhouse), and it all goes by so fast.

Standing at the top of the waterfall just before your first rappel, you might question why you thought this was a good idea. (I certainly did.) But after I took those first couple of steps and started to get the hang of it, all I could think was, “This is so cool!” And I definitely wanted to go again.

Tours are booking now – they run Thursdays, Fridays, Saturdays, and Sundays from Memorial Day through October – and advanced registration is required. You can also read frequently asked questions and find out more details on the Northeast Mountaineering website.

Even if you’ve never rappelled a darn thing before, this is one adventure that will put a little thrill in your world.