You can be anything you want to be. Just look what this former Air Force base grew into!

I bet it had plenty of naysayers along the way, saying that Air Force bases could never be wildlife refuges. That it just wasn’t done. But Loring Air Force Base – or should I say the Aroostook Wildlife Refuge – showed them!

The refuge was established in 1998 when land was transferred from the U.S. Air Force to the U.S. Fish and Wildlife Service, and the refuge also manages 2,400 acres of wetland conservation easements throughout Aroostook County.

The former Air Force grounds now features close to five miles of hiking trails which are groomed for cross-country skiing in the winter. And while it’s a pretty ski, particularly on a perfectly snowing and wonderful day, the restorative work being done here is really remarkable.

Here’s a blurb from the Aroostook National Wildlife Refuge brochure:

Located close to the Canadian border, Aroostook NWR’s vegetation contains elements of the sub-boreal forest that occurs further to the north and hardwood forests typically found in southern parts of the state.

Due to the buffered pH in the soil from limestone deposits, many unique plants occur on the refuge. Lady slipper orchids, Canada lily, trout lily, pitcher plant, sundew, variegated scouring rush and many other plants are found here.

Aroostook NWR provides long term conservation of important upland and wetland habitats for migratory birds and the federally threatened Canada lynx and Northern longeared bat. The refuge manages and enhances habitats for wildlife, thereby contributing to biological diversity and providing wildlife oriented publicuses. Refuge staff are working to restore important habitats that were altered by previous military use of the land.

The trails are supremely well-marked trails, both for the trails we can ski on and all the FORBIDDEN PLACES WE SHALL NOT GO (Air Force secrets, of course.) The East Loring Trail (3.5 miles) is a flat, straight stretch that leads to a warming hut at the junction with the Beaver Pond Trail.

And occasionally you might spot an animal skull in a cage attached to a tree. Nice. 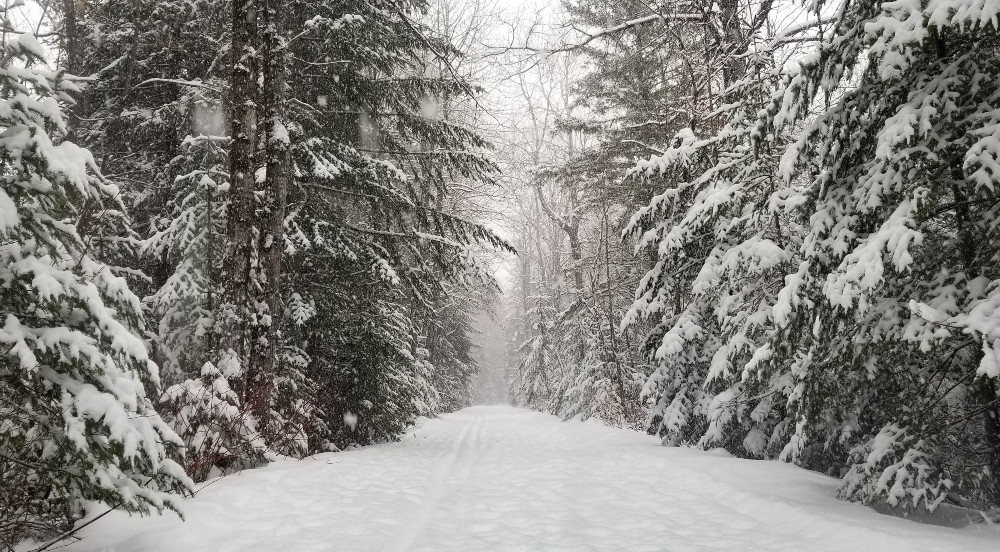