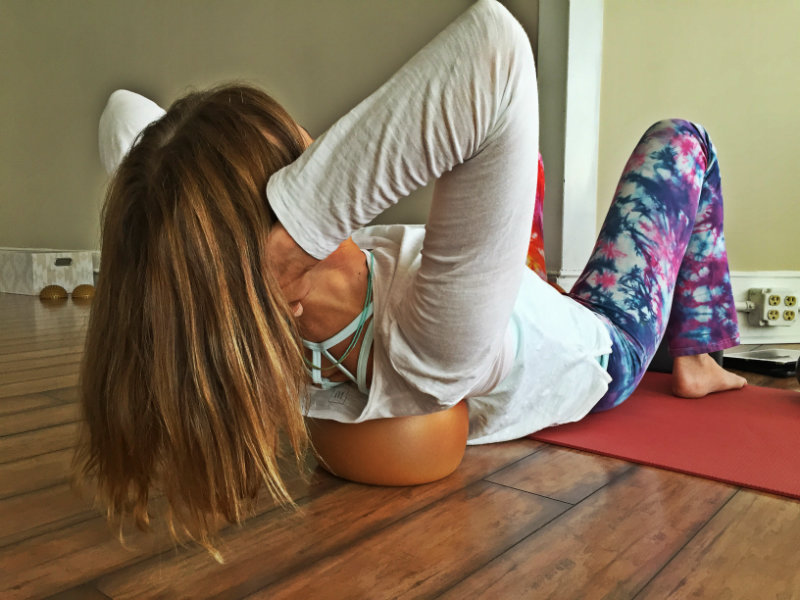 My right hip aches after I hike or sometimes after a long walk or short jog (all my jogs are short).

It didn’t used to ache. I don’t remember my body yelling back at me when I was in my teens or 20s. I supposed that’s the glory of being in your teens and 20s. You’re broke, sure, but your body is pretty resilient. Now I wake up with a stiff neck or feel my back tighten with every hour I spend lurking over a laptop. My body isn’t quiet anymore. Maybe yours does a bit of shouting, too?

A couple of years ago (perhaps prompted by my continued complaints about my aching hip) a friend gave me a Yamuna body rolling ball – a grape-fruit-sized thing that squished when I squeezed it. It’s for massaging your muscles, she said. Perfect, I thought, and I put it in my hallway closet and never looked at it again.

Until last Monday. Last Monday I went for a jog in the woods (I maintained a decent run for over 20 minutes! That’s HUGE!). My hip, however, wasn’t impressed. I could feel it getting cranky as I walked back to the trailhead. It would only get crankier as the afternoon went on, stiffening every time I sat down for more than five minutes at a time.

When I got home, I busted that ball out of its solitary place on the closet shelf, got down on the floor, and I body rolled. My hip – and whatever muscles and tendons I’d been aggravating there – rejoiced. Even better, when I got out of bed the next morning (fully expecting my hip to let out a yelp as it often does), my hip didn’t say a thing. Not a thing!

So what got me to finally give that long-forgotten body roll ball a chance (and the knowledge to know what the heck to do with it)? A body rolling class at Willard Beach Studio in South Portland.

Last week I went to one of the studio’s hour-long body rolling classes (Wednesdays at 5:30 p.m. and Friday at 9:30 a.m.). I knew nothing about body rolling (aside from, “it’s for massaging your muscles,” of course). I’d used a foam roller once, does that even count?

Like foam rolling, body rolling stretches out those muscles and tendons that get so darn tight, allowing for improved range of motion, injury prevention, and much-needed tension release (which means less ache in the hip for me). The size and shape of the balls (which come in varying sizes from 4 to 10 inches and in different densities) allow you to really “get in there” in a way that’s tougher for the foam rollers.

At my recent class, instructor and studio co-owner Brenda Cyr started us off with foot wakers. The dome-shaped things are covered in small, firm nubs and look like something you’d find growing in clusters on the ocean floor.

We stood with our feet draped over those nubby domes, using the wall for support, letting gravity and our own body weight press our soles and toes into the foot wakers’ pebbled surface. Some of the foot positions felt awkward at first (Brenda encouraged us to do one foot at a time if any of the stretches were too intense). And others hit the spot in that, “oh yea, right there,” kind of way.

Then it was on to the hips (I think hips are always a part of the class, but Brenda did ask us which muscles/areas of the body we wanted to focus on during this class. I yelled, “HIPS!”).

There’s no hard and fast rules regarding which size ball to use, or which firmness, but Brenda offered recommendations for the newbies like me who had no idea which ball was which. If I wanted to swap it out with softer or firmer ball, all I had to do was ask (and at one point, I did).

Our movements were slow and methodical, the ball rolling in a long line over our hips and then back again, our body weight and gravity again helping the cause. It felt so good. And then, there it was, that super tight spot in my hip that groaned with release as the small black ball pressed into it. Brenda said to take our time in spots like that. And I did, returning to it a few times, squeezing my muscle and then relaxing it again, letting my weight sink over the ball. And wow. Relief.

We  worked on our backs for a while, too, reclining on gold balls pressed between our shoulder blades. The balls rolled up toward the base of our skulls, they rolled down toward our lower backs. And again we moved our bodies slowly and methodically over the balls, pausing in spots that asked for it.

I couldn’t name the particular muscles and tendons that called out to me for relief, but Brenda pulled out an iPad with a cool anatomy app on it that allows you to drill down to specific muscles and joints to see how things connect and why tension might be building up. She also has a mini skeleton.

By class end, I had a new appreciation for the Yamuna Body Rolling ball. There’s some pretty big massage in that little thing, and taking a class helped me figure out how, exactly, I’m supposed to use it. That’ll come in handy at home when needed, too.